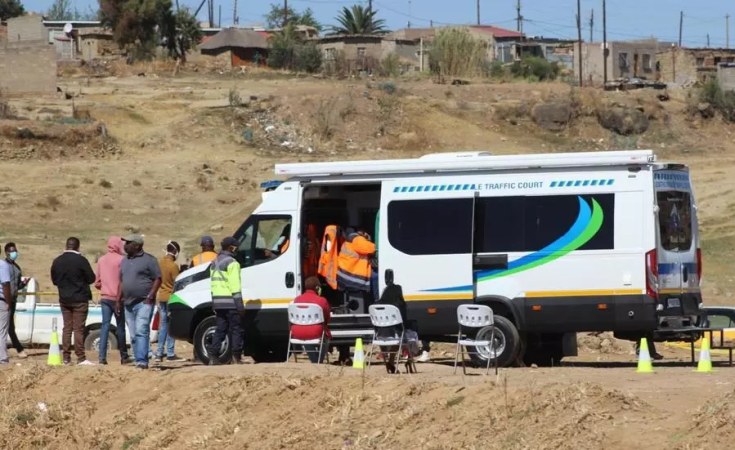 Lesotho transport operators have begun a seven-day countrywide strike in protest against a new mobile traffic court, saying its hefty fines were killing their struggling business amid Covid-induced woes.

Bus and taxi operators are also protesting that the mobile court subjected people to unfair trials as it did not give them sufficient time to prepare their cases and seek legal representation.

Launched in June this year, the mobile traffic court is a fully equipped vehicle operating as a magistrate court but trialling only cases of traffic offences on the spot.

On Wednesday morning, public transport users were forced to walk to their workplaces while many had to return home because they could not get buses and taxies to ferry them to work and other destinations.

Known for morning-hour traffic jams caused mainly by the influx of second-hand imported cars from Japan, in the capital Maseru traffic was smooth. Mainly private cars and very few taxis were seen on the roads leading into the city.

The strike continues despite the government's indefinite suspension on Tuesday of the mobile court to avert the imminent strike. For the operators, the suspension is not enough - they want its complete removal from the country's roads.

Transport operators said the police no longer issued spot-fines but all minor offences are brought to court, typically ending in higher fines (ranging from $6.06 to $90.9) as opposed to a spot-fine (usually $1.81).

Instead, the Minister of Transport, Tšoeu Mokeretla, announced on local radio that the mobile court was suspended indefinitely to allow for negotiations. To their dismay, Jonas said the government has not initiated any communication with them.

The mobile court has not only affected the transport industry, as most of the vehicles are parked at home in towns where it is deployed, but the brunt is also felt by small businesses that rely on the taxi industry.

According to Road Fund, the court also aims to ensure effective collection fines on traffic offences, "which Road Fund identified as a need".

This has led to a modified practice by the police on roadblock campaigns done collaboratively with the mobile court.

"The government has turned against our industry. If it's not saddling it with taxes, its fines don't even consider the Covid-19 challenges," Jonas told a media briefing on Monday.

Speaking to RFI, the magistrate court information officer said the payments end up being higher because of multiple charges that result in multiple fines on one person.

The transport operators in August sued the government in a bid to stop mobile court, but two months on, the case is still pending in court. In their application, the taxi operators argued that the mobile traffic court is "a mockery of justice... applying the law of the jungle".