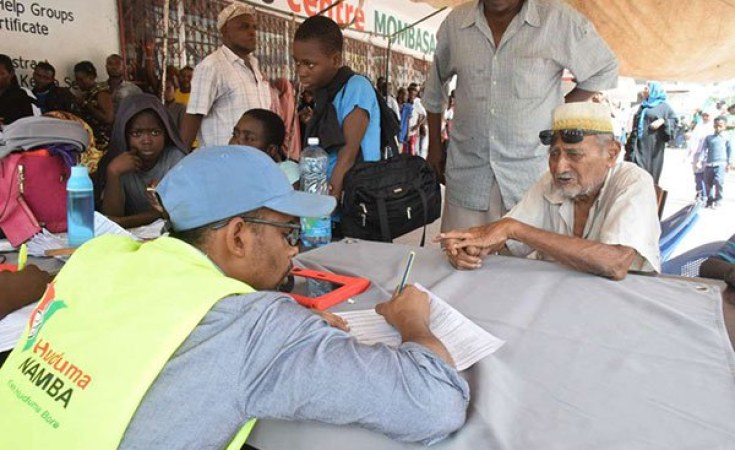 Kenyans may have to wait until December to get the much-awaited Huduma cards, which are expected to be the primary tool of identification for everyone seeking government services.

President Kenyatta and First Lady Margaret Kenyatta yesterday received their cards, signalling an end to a two-year wait since the document was mooted in 2018.

All eyes now turn to Parliament, which is vetting Data Commissioner appointee Immaculate Kassait, who will take charge of the National Integrated Identity Management System (Niims).

"Today you have all witnessed as I received mine; we now wait upon the National Assembly to complete their work and vet the Data Commissioner so that we can roll out nationwide issuance as soon as possible," President Kenyatta said shortly after receiving his card at the Gusii Stadium, where he presided over Mashujaa Day celebrations.

Issuance of the first cards breathes new life into a project that has been dogged by controversy from inception.

The Niims is supposed to provide a single source of information for all citizens and residents of Kenya. It will do this by integrating data from all the identity documents -- ID, driving licence, passport, National Social Security Fund (NSSF), National Hospital Insurance Fund (NHIF) and the Kenya Revenue Authority tax PIN.

The government plans to issue three types of Huduma cards. All children will be required to be registered on Niims within 90 days of birth, but they will not get cards until they are six old.

Their cards will be called Minors Huduma Card and it is what they will use to enrol in school.

Kenyan citizens aged above 18 years will get an Adults Huduma Card while adult non-citizens will get a Foreign Nationals Huduma Card. All these cards will enable their owners to get access to government services.

The card will on its face have almost similar details to national IDs. This includes the owner's full name, sex, date of birth, Huduma Namba, nationality or residence status, place of birth, facial photograph and date of issue.

With this information in a central data base, registered Kenyans will only need a Huduma Card to access any government services. The card will have an electronic chip where all this information is merged and installed similar to the way ATM cards are designed.

For the past two years, the project has been dogged with controversy, including a lawsuit that almost derailed it.

A section of Kenyans are still concerned about the privacy of their data and why the government is issuing them with a new identification number when there are already several numbers in use.

Also, politicians allied to Deputy President William Ruto have made unsubstantiated claims that it could be used to rig elections in 2022.

While acknowledging the potential legal land mines that the project could run into if not done procedurally, President Kenyatta yesterday said that the cards will only be issued once a Data Commissioner takes office.

Last week, the President nominated Ms Kassait to the office subject to Parliament's approval. The National Assembly's Committee on Communication, Information and Innovation is receiving views from the public on the suitability of Ms Kassait for the position.

However, Kenya still lacks sufficient laws for the roll-out of the project. Parliament is yet to approve the Huduma Bill, formulated early this year in preparation for the Niims project.

The Data Protection Act that was signed into law last December has, however, set out requirements on how personal data collected for the Huduma Card will be protected.

If everything goes according to plan, Kenyans who registered their details with the government last year will begin getting their cards in December.

At least 38 million Kenyans had their data captured during the first phase of mass registration last year.

Those who did not register will get a chance to get their details taken in December. The Nation understands that, while the first cards will be issued for free, those who lose their cards will be required to pay for a replacement.

Critics of Huduma Namba have raised concerns that the card could lock out a huge number of Kenyans from accessing government services. The High Court in January ruled that the government should not force anyone to get a card.

But if passed into law, the proposed Huduma Bill will make it mandatory for any Kenyan to have a Huduma Namba in order to get a passport, a driving licence, register a mobile phone number, vote, pay taxes, open a bank account, register a company or get a marriage certificate.

Additionally, those that don't have the card will not buy or transfer land, register for electricity connection, access Universal Health Care services, benefit from the government housing scheme, enrol in a public educational facility or register a vehicle.