South Africa: Housing Protest After Gauteng 'Delivers Nothing' On 2018 Promise 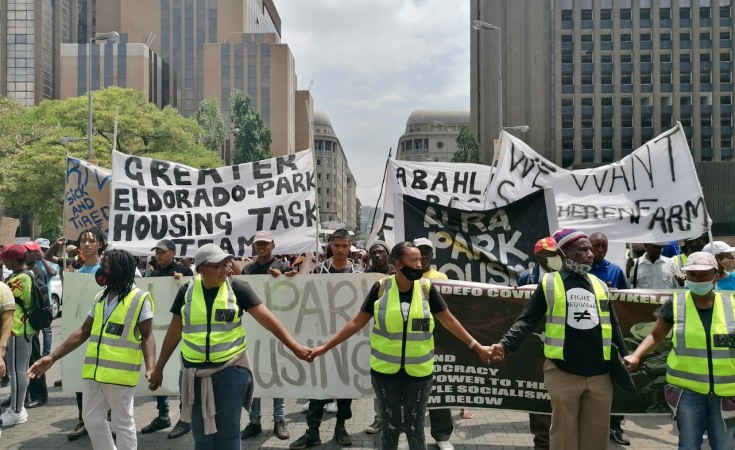 Zoë Postman/GroundUp
Over 100 people from several communities marched through central Johannesburg, under the banner of the Gauteng Housing Crisis Committee, to demand land and housing, on Wednesday morning.
GroundUp (Cape Town)
By Zoë Postman

The Gauteng Housing Crisis Committee are demanding land and housing through the Rapid Land Release Programme.

They also want an immediate moratorium on evictions and demolitions.

They have given the Premier 48 hours to respond and until 31 October to report on progress.

Over 100 people from several Gauteng communities marched through central Johannesburg under the banner of the Gauteng Housing Crisis Committee (GHCC), to demand land and housing, on Wednesday.

They held banners and placards which read: "Housing for all", "End evictions" and "Release the land". The Johannesburg Metropolitan Police Department escorted the marchers from the Johannesburg City Library to Gauteng Premier David Makhura's office in Newtown.

When the protesters reached an ANC office in Newtown on the way to Makhura's office, they sat down in the street outside the offices.

Thami Hukwe, committee coordinator, addressed the crowd: "We stand here 26 years later without us having land, houses or jobs ... We stand in front of your [ANC] building to say the ANC government must fall ... and the socialist government must rise."

The Gauteng Executive Council said in a statement on May 2018 (no longer on its website) that the land belonging to local, provincial and national government would be made available for people in the province wanting to build houses for themselves, urban agriculture, township businesses, sports and recreational purposes.

"Since the promises were made, the communities decided not to continue with land occupations. However, we feel disappointed that nothing tangible was delivered to us," read GHCC's memorandum, dated 21 October 2020.

The crisis committee is demanding that a rapid land release task team be created, and include its representatives on it. They want the team to resolve what is stopping the release of the land and the Premier to allow homeless and landless people to actively participate in the planning and implementation of the programme.

"We demand an immediate moratorium on the evictions and demolitions that result in some people being left homeless and others being forcibly removed out of their homes," read the memorandum.

Godfrey Moloko, who joined the march, has lived in Riverlea for over 20 years. He said he is currently staying in a one-room shack with six other people. "Some of my children are grown ups already and others are teenagers. There is no privacy. We are packed like sardines," he said.

"Makhura must put himself in my shoes and think what it's like to live in a small zozo [shack] like mine, with all your kids," he said.

Malitah Ngcobo, from Abahlali baseMjondolo in Tembisa, said homelessness has increased due to many people losing their jobs because of the pandemic.

She said there were various mega housing projects being implemented by the City of Ekhuruleni, but her community was not informed and they don't know who will benefit.

"I would like to ask Makhura when we are going to have homes because even now in Vusimuzi, Tembisa, we are still living in shacks. It seems like they [government] just don't care about us," she said.

Mxolisi Xayiya, special advisor to Makhura, signed and accepted the memorandum. He said he would not be able to respond within 48 hours as requested because he had to consult various departments.

"All the issues that are here are reasonable ... I was there when the rapid land release was spoken about, so we will have to deal with these issues," Xayiya told the crowd.

The Gauteng Housing Crisis Committee has given Makhura until 31 October to report on the progress of the programme, and insisted that Makhura respond to the demands within 48 hours.