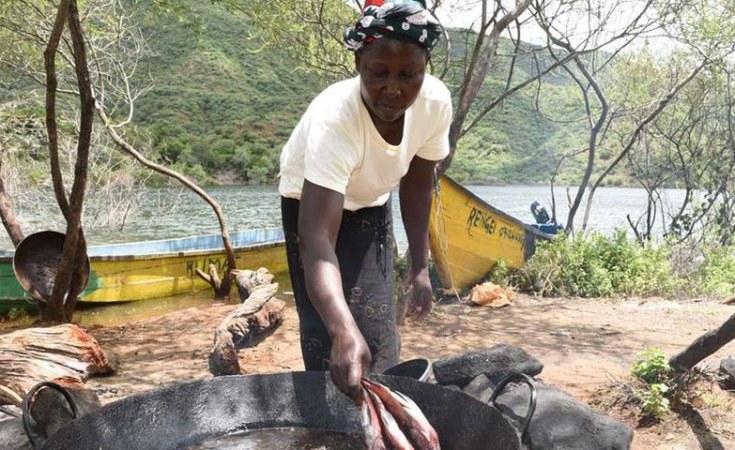 Jared Nyataya/Nation Media Group
Miriam Nabwire from Busia County, fries fish caught at Turkwel Dam in West Pokot County at the shores of the dam on October 29.
The Nation (Nairobi)
By Gerald Andae

An estimated 30,000 households in Turkana County risk a humanitarian crisis as authorities warn of looming floods due to an expected spill over at the Turkwel hydro-power dam.

The Kenya Red Cross said ongoing heavy rainfall in the region had pushed the dam's water level to 1,148 metres by October 19 -- an equivalent of 92 per cent of the reservoir's maximum holding capacity.

With more downpour projected in the area, the water is expected to spill over and affect thousands of downstream households.

"The Kenya Red Cross Society has been monitoring rising levels of water in Turkwel dam in West Pokot County, indications are that the dam is likely to overflow around the end of October or first week of November," said the agency in a statement.

"The spillage is projected to result in flooding downstream mainly in Turkana County with more than 30,000 households in Lodwar, Katilu, Loyapat, Nakwomoru, Orwa, Nadato, Mukus and Kainuk [to] be affected."

An increase in water levels has been caused by the short rains that started this month and are expected to run all the way to December.

With the current rains in the dam catchment areas, "including this October-November-December the dam is expected to fill up and overflow," the agency added.

Red Cross said together with the multi-agency Turkwel dam monitoring team, they have advised people living in risky areas to relocate to safe grounds.