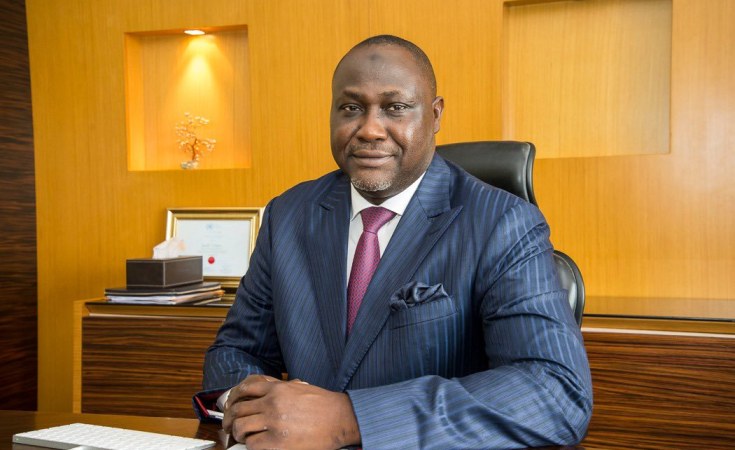 Washington, DC — The Investing in Africa’s Future is a premier public forum jointly hosted by the Atlantic Council and the U.S. International Development Finance Corporation (DFC) to promote US trade and investment in African markets. It was a virtual conference that featured 4 separate sessions centered on convening African heads of state, major international investors, and US government trade and investment officials to discuss how US investors can help finance the next big boom for Africa through the U.S. International Development Finance Corporation (DFC) and Prosper Africa.In a roundtable discussion that was moderated by DFC Executive Vice President for Strategy Mr. Edward Burrier, and featured prominent African Development Financial Institutions heads like Africa Finance Corporation’s (AFC) President & CEO, Mr. Samalia Zubairu. The session invited the CEOs to share their efforts to promote recovery and growth on the continent.

The COVID-19 pandemic has sharpened Africa's already urgent need for added infrastructure spending. It has been estimated that Africa's infrastructure financing needs for both the capital expenditure on new projects, and servicing on existing assets are up to $170 billion a year by 2025, with an estimated financing gap of as much as $108 billion a year. What forms of collaboration and innovation among DFIs, including co-financing, co-underwriting of risk mitigation instruments, and associated co-ordination, do you think will be most effective in responding to the COVID-19 pandemic?

The COVID-19 pandemic has presented a great challenge to the African continent; however, it has also created an opportunity for the continent to rethink and re-evaluate its position and standing in a global production and distribution value chain that has been. Achieving this will require significant investments in Africa’s people and more importantly, its infrastructure, and the DFIs on this panel as well as those such as DFC have a major role to play in the mobilization and channeling the capital required to make these investments.

VIEW: The session can be viewed here

In terms of collaboration, we believe DFIs can and should play a larger role in the de- risking of early stage projects on the continent, and we have been at the forefront of this for quite some, one such example is the Djibouti wind project where we deployed bridge equity structures that significantly reduced the development time of the project and saw us reach financial close at a quicker rate, increasing the return profile and attractiveness of the project. We were able to achieve this by tapping into our existing relationships with strong players such as FMO and Climate Investor One. We believe these innovative de- risking structures will be key to closing Africa’s huge infrastructure deficit as they will facilitate the creation of a more robust pipeline of bankable projects which is ultimately where the challenge lies.

The COVID-19 pandemic has resulted in a high demand for digital innovations and an acceleration of the digital economy. How can such opportunities be turned into viable projects that will make Africa most resilient during and after this crisis, while contributing toward economic growth?

These opportunities are already being turned into viable projects and have been for a while. For example, AFC was a pioneer investor in the Main One Cable company which is a leading connectivity and data centre solutions provider in West Africa. Main One has significantly expanded its footprint in the west African region and is currently looking to expand its presence in the last mile segment of the market and also venture into other areas such as data centers. The market for a digital economy exists on the continent and we are seeing increased activity in the space, for example Actis has recently acquired a major data centre player in the Nigeria market (Rack Centre) and players such as Facebook and Google have been taking on an increasingly active role in the region.

Similarly, many have observed that trends such as digitization, market consolidation, and regional cooperation are accelerating. Could you tell us what you see in terms of the opportunities that presents for the private sector in Africa and DFIs’ role in these potential transformations?

There is a need for expansion capital, and I think DFIs can play that role, the AFC has seen an increase in expansion activity from key players such as mobile network operators.

Of the three areas mentioned above, regional cooperation is arguably where AFC plays the most significant role, where we seek to increase intra-regional trade amongst African countries. Whilst intra-Africa trade has of course grown over the decades, it has not done so at the pace that is required or desired.

For example, between 1980 and 2019, it grew by just 5.1% to 16%. Compare this to Europe at 73%, and Asia at 52%. The need for the AfCFTA could therefore not be more pressing, with it’s success dependent to a large extent, on Africa’s infrastructure deficit being closed in order to bring to an end the cross-border fragmentation of supply chains.

Put simply, this agreement cannot meet its full potential without the road, bridges, power supply and all the necessary infrastructure, to facilitate the flow of goods and services across borders on the continent.

Our business is therefore a key part of the jigsaw that ensures that the patterns of poor infrastructure we see across Africa, are reversed by making strategic investments in connectivity. It is in this regard that AFC’s mission to close the investment gap has become ever more essential.

What further steps do your institutions plan to take in the coming months to shore up economic resilience and recovery in Africa?

We will be focused on the expansion of our ecosystem strategy which is underpinned by integrated value chains which we embarked upon mainly as a de-risking mechanism for a series of projects in a value chain. Now we see this strategy as a way of solving Africa’s challenges of rising unemployment, income inequality, vulnerability to climate change and improving the value derived by Africa in the global value chains in which we have comparative advantage focusing on cotton, cashew, cocoa, and forestry as well as for minerals/metals such as bauxite, manganese, cobalt, and copper all of which are becoming increasingly important given their role in the green future which we are all striving towards.

We have a successfully executed a pilot project of value accretive processing of Timber in the Gabon Special Economic Zone(GSEZ) initiative that has transformed Gabon from just exporting logs of wood to the world’s second largest exporter of veneer and various other products processed at the industrial zone, with 8,200 and 26,000 direct and indirect jobs created respectively over the last 10 years. Likewise, exports of timber grew 3x from US$350 million to US$1.052 billion with contribution to GDP growing over 4x from US$200m to US$842 million from 2010 to 2019. GSEZ has now grown into the ARISE Integrated Industrial Zone; the Arise Ports and Logistics and the Arise Infrastructure Services platforms with a pipeline of development projects in Mauritania, Cote D’Ivoire, Togo and Benin.

DFC was pleased to obtain approval at our Board meeting last month for providing a tier-2 capital loan to AFC of up to US$250 million. Could you tell the audience more about your work with the DFC and its relevance in the wake of the pandemic?

This facility is of course not the first AFC has received from DFC. It’s previously incarnation as OPIC, AFC was the recipient of a US$75 million facility which we deploy in eligible infrastructure projects on the continent. This transaction therefore builds on that previous shared success, and as such we view the DFC as a strong partner for development of the African continent and look forward to building on this first step in what we believe will be a long lasting and mutually beneficial relationship. We believe that players such as the DFC will be key to the mobilization and channeling of capital into the African infrastructure and industrial space, particularly in a post COVID-19 world and we look forward to working with you to achieve this.

I noted that last month AFC had a successful issuance of its first green bond, in the amount of 150 million Swiss franc, and had a US$700 million Eurobond issuance in June,2020 which was about three times oversubscribed despite the challenging global economic context. Would you like to tell us about any specific projects or initiatives that the proceeds will support?

The proceeds from our debut Green Bond will be used by the Corporation to finance, refinance eligible green projects such as the 66MW Djibouti Wind Farm, which replaces energy from an ageing diesel plant and imported power from Ethiopia, and, the 44MW Singrobo Hydro dam project in the Republic of Côte d'Ivoire; to increase power generation capacity and reduce overall energy cost.

Next Story
Tagged:
Copyright © 2020 Africa Finance Corporation. All rights reserved. Distributed by AllAfrica Global Media (allAfrica.com). To contact the copyright holder directly for corrections — or for permission to republish or make other authorized use of this material, click here.