Sudan: Statement from the Press Secretary on Sudan 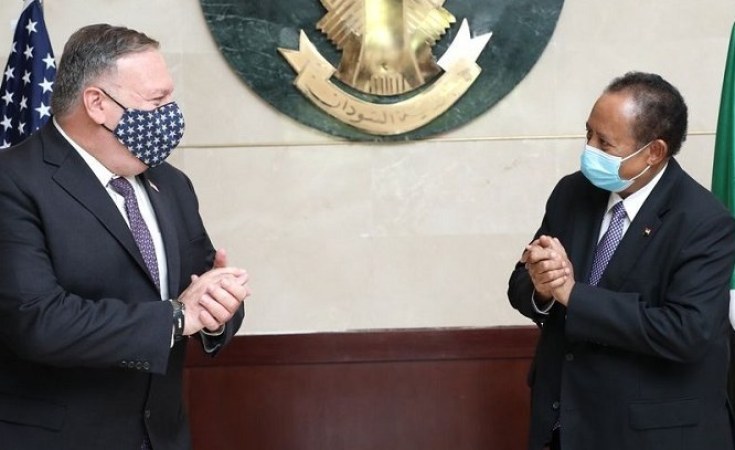 Sudan News Agency
U.S. Secretary of State Mike Pompeo flew from Israel to negotiate with Prime Minister Abdalla Hamdok of Sudan in Khartoum during August.
The White House (Washington, DC)
announcement By Statement from the Press Secretary on Sudan

Washington, DC — President Donald J. Trump has informed Congress of his intent to formally rescind Sudan’s designation as a State Sponsor of Terrorism.

This follows on Sudan’s recent agreement to resolve certain claims of United States victims of terror and their families.  Yesterday, in fulfillment of that agreement, the transitional government of Sudan transferred $335 million into an escrow account for these victims and their families.

By finally serving justice for the American people, President Trump was able to achieve what previous presidents could not – the resolution of longstanding claims of victims of the East Africa embassy bombings, the attack on the USS Cole, and the murder of USAID employee John Granville.  This is a significant achievement for the President and his Administration and brings a measure of closure to many to whom it has long been out of reach.

Today represents a momentous step forward in the United States-Sudan bilateral relationship and marks a pivotal turning point for Sudan, allowing for a new future of collaboration and support for its ongoing and historic democratic transition.

We commend the transitional government of Sudan for its work to chart a new course and stand ready to support the people of Sudan as they work to build a better future for themselves and future generations.  It is essential that Congress act now to pass the  legislation required to ensure that the American people rapidly realize the full benefits of this policy breakthrough.

Previous Story
Tagged:
Copyright © 2020 The White House. All rights reserved. Distributed by AllAfrica Global Media (allAfrica.com). To contact the copyright holder directly for corrections — or for permission to republish or make other authorized use of this material, click here.