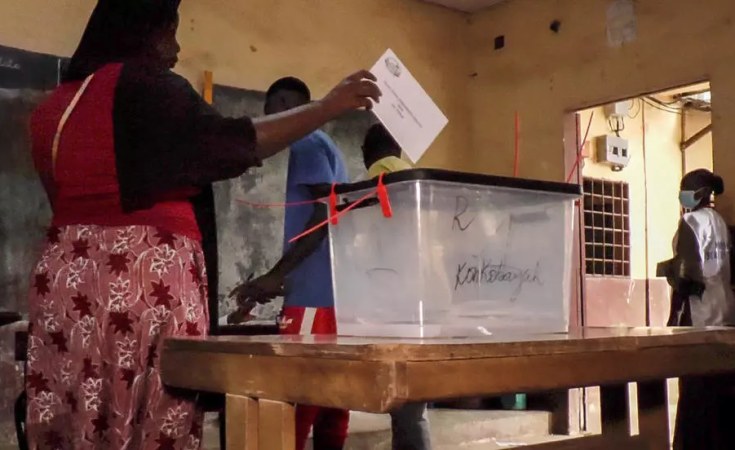 Guinea's President Alpha Conde has won the Oct. 18 election with 59.5% of the vote, according to a tally from the election commission on Saturday. The victory gives 82-year-old Conde a third term in office.

Alpha Conde has won reelection after a bitterly fought presidential vote in which the opposition said he had no right to participate. Opposition candidate Cellou Dalein Diallo, Conde's nearest rival with 33.5% of the vote, said he has evidence of fraud and plans to file a complaint with the constitutional court. Guinea is now bracing for protests, and there are fears that post-election violence could turn bloody.

The usually bustling streets of Guinea's capital, Conakry, are deserted except for the military's massive presence. Lansana Kamara, a mechanic, says he is very concerned by the violence that has gripped the West African nation following the October 18 presidential election. "I am afraid, if things go bad for the country, this would not be good for anyone," Kamara told DW.

On Friday, there were reports of gunfire after the government deployed the military in Conakry's streets in anticipation of violence and to "maintain peace." Internet disruptions were also experienced, according to digital rights groups and witnesses.

Thierno Diallo, an opposition politician with the UFDG party, says the move is a continuation of the government's disrespect of the Guinean electorate's will."This is why they [government] are putting the country under a state of emergency for them to deploy their plan to steal power again," Diallo told DW.

But in an interview with DW's French for Africa Service, Alpha Souleymane Ba Fisher, a lawmaker from the ruling RPG party, accused opposition candidate Cellou Dalein Diallo of stoking unnecessary political tension. "He invited his activists to take to the streets and attack people so that the country would fall into chaos," Ba Fisher said.

There are conflicting reports about how many people have been killed. The government claims nine people, including a police officer, have died due to the election protests. Opposition groups say the number is much higher. According to Germany's dpa news agency, 20 people have lost their lives.

Though held in a tense environment, the election was praised as calm and orderly, except for "small incidents here and there," according to Guinea's Prime Minister Ibrahima Kassory Fofana. Both AU and ECOWAS election observers said the election was mostly fair."From the opening of the poll to the closing of the poll --that part of the process generally went well," opposition politician Diallo said. "The problem was after the polls closed -- to the counting and posting of the results."

But for RPG lawmaker Ba Fisher, Guinea is a country with a constitution and institutions which must be respected. "Even the president of the republic listens to what these institutions say," he said.

"Guinea faces a severe crisis," Paul Melly, Associate Fellow at the London-based Chatham House, said. "The opposition and its supporters do not trust the electoral system. The decision by opposition candidate Cellou Dalein Diallo to declare himself winner only adds to the uncertainty in a sense to confrontation," Melly told DW.

Is Diallo under house arrest?

For the past three days, security officers have sealed off Dalein Diallo's house. "He cannot go out, nobody can go in," party member and politician Diallo complained.

Asked by DW, whether Conde's main rival faces arrest, Ba Fisher said that was not part of the agenda. "At the moment, we have to protect him so that other extremists don't try to take his life and put it on our account. That would be much worse," Ba Fisher said.

"It just fuels a more polarized political climate that is getting more and more difficult," Melly said. "Human rights have deteriorated, and there is a sense that what little trust there was in the Guinean political system two or three years ago has faded."

In 2015, Guinea conducted a peaceful election that saw thereelection of President Alpha Conde. The opposition argued that he pushed to change the constitution so he could run for another term. "This contest is quite a setback and does not do anything to restore any sense of cohesion or national unity or any sense of a government that is chosen with the mass consent of the people," Melly said.

France's role in Guinea's next leader

"I am hoping that Paris respects democracy and respects the will of the people of Guinea," Diallo said. "France is not the one to decide who becomes our leader, but once the people decide, the president-elect must be supported because this is the will of the Guinean population."

For West Africa as a whole, Guinea's crisis is perhaps less worrying than the situation in Ivory Coast. Analyst Melly said that Guinea is less integrated into West Africa's political leadership than Ivory Coast. "But the crisis in Guinea is just as serious."

Mechanic Kamara has a word of advice for the political arm-wrestling going on between Conde and Dalein Diallo: "Confusion always puts a nation backward. We are all sons of Guinea; we must come together."

Karim Kamara contributed to this report.

Previous Story
'We Won and Have the Receipts to Prove It' - Diallo
Next Story
President Poised for Landslide Election Win, Preliminary Results Show

'We Won and Have the Receipts to Prove It' - Diallo