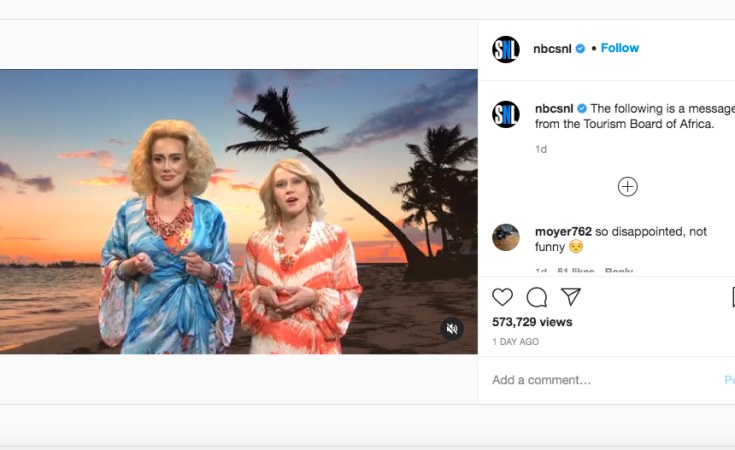 Cape Town — Who gave the greenlight to that Africa sketch? I have questions…

The popular singer has sparked controversy over her Saturday Night Live comedy skit portraying Africa as a sex tourism destination.

In the skit, Adele, Kate McKinnon, and Heidi Gardner play divorcees promoting tours of Africa to other white women.

The cringeworthy skit use of "tribesmen" and "massive bamboos," with the Grammy-awarding singer constantly cracking up, left many fuming. In the background, buff black men are seen escorting white women in colourful sarongs across the beach.

According to IOL, "McKinnon revealed that she had flown to Africa after her divorce "for a new beginning," of which Adele remarked: "And where better than the crystal waters and sandy beaches of Africa."

McKinnon added: "The humpback whales and the tall tall tribesmen."

Gardner, who later joined the duo, said she traveled to Africa after her split from her husband.

When Adele, who barely could keep a straight face during the skit, said "I found a deep, deep connection," Gardner replied: "You can feel it in your stomach."

The sexual innuendos in the clip were received with mixed emotions on social media. Critics blasted the production for being stereotypes, fetishizing black men, and mocking an area currently dealing with unrest over police brutality and the #EndSARS movement. Thousands of protesters, under the banner #EndSARS, have been demanding sweeping police reforms in the country.  The unit has been accused of rape, harassment, extortion, and killing of innocent people.

Here are some reactions:

@AdelaLavine -  If the skit was meant to be sarcastic it sort of missed it was just off and definitely misses an awareness that it came across laughing at the idea of using black men. Ya way missed the mark. #AdeleSNL

@RealCarlosSagan -  I'm not very PC at all, as @PaceTheRage  will attest, but even I thought this skit was cringy. Funny, too, mind you, but cringy. #snl #AdeleSNL

@jpaige314 -   Adele + SNL African tourism sketch was not something to be proud of. Great to know there are still white women who sexualize Black men as a part of their personality. #AdeleSNL #AdeleOnSNL

Adele faced backlash in August after being accused of cultural appropriation for wearing Bantu knots and a Jamaican flag bikini.