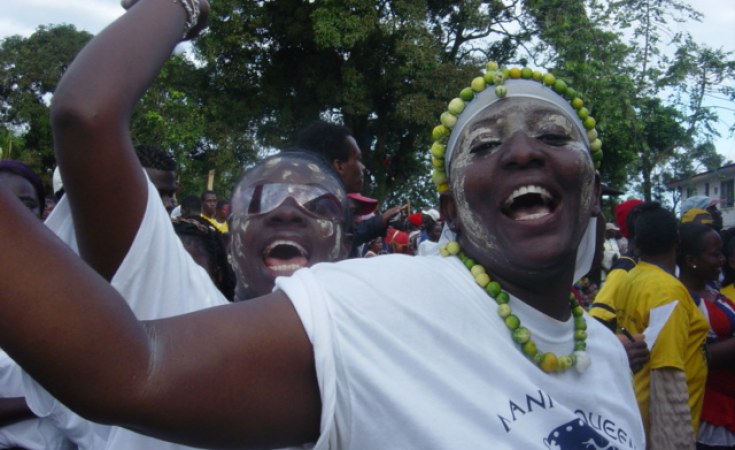 allAfrica.com
George Weah fans. This is Najat, the leader of the "Manneh Queens," who dance, sing for and support Weah. Manneh is his middle name - George Manneh Weah.
Liberian Observer (Monrovia)
By William Q. Harmon

It appears that President George Weah and his ruling Coalition for Democratic Change are orchestrating a plan to ensure that the ex-footballer is entrenched at the helm of national leadership for a third term if what high profile CDCians and staunch supporters of the ruling establishment are saying is anything to go by.

Though the Liberian Constitution put a limit of the President to two terms, people within the hierarchy of the CDC government continue to insinuate that President Weah harbors an ambition to go beyond his two-term limit.

Since Mr. Weah took over in 2018, some loyalists and partisans were sentimentally commenting without being cognizant of the Liberian Constitution that President George Weah will rule Liberia for 24 years.

In a startling revelation on Sunday from the pulpit of his Church in Paynesville, controversial Nimba County Senator, Prince Y. Johnson, said that the Liberian leader is prepared to remain in power for an additional twelve years after his first six years, which ends in 2023.

Liberians are poised to go for a referendum on December 8, 2020, and Senator Johnson noted that when the referendum passes, the current six years of the CDC regime is zero years for them--adding that President Weah will be going for two more terms, equating his reign to three terms.

The statement from the Nimba County Senator, who is a strong ally of President Weah, comes on the heels of political agitations in neighboring Guinea and Ivory Coast, where President Weah's counterparts are violently seeking third terms.

Liberians are however outraged over their government's apparent hidden motive for organizing a referendum on December 8 and, with this latest revelation from Senator Johnson, political pundits are beginning to cautiously look at the rationale of the pending referendum.

However, there have been some hints of President Weah eyeing three terms at the Liberian presidency.

Prior to her death, Former Montserrado County District # 9 Representative, Munah Pelham Youngblood, said at a gathering at CDC headquarters that Liberia will get to a point where they will seek a referendum to change the constitution in order for President Weah to seek a third term. "Liberians will reach a time that we will change the constitution to ensure that President Weah rules this country for three terms," she said to loud applause.

During one of the many endorsement ceremonies of Thomas P. Fallah in September, Minister Tweah said that the President needs to be made a "Benevolent Dictator" so that Liberians can fear him in order not to question his administrative actions and decisions.

He added that the CDC administration needs to start taking tough decisions and, as such, there is a need to re-orientate the whole government in order to achieve that goal.

"Look, we need a benevolent dictator. It means somebody like Paul Kagame of Rwanda, who alone can sit in a room and make a decision that will change the whole country faster," the Minister said, adding: "This is what is happening in many Asian countries where the benevolent dictators just say, 'OK, I'm not here to hear what the other people [have] to say. I will build that road and put the money there."