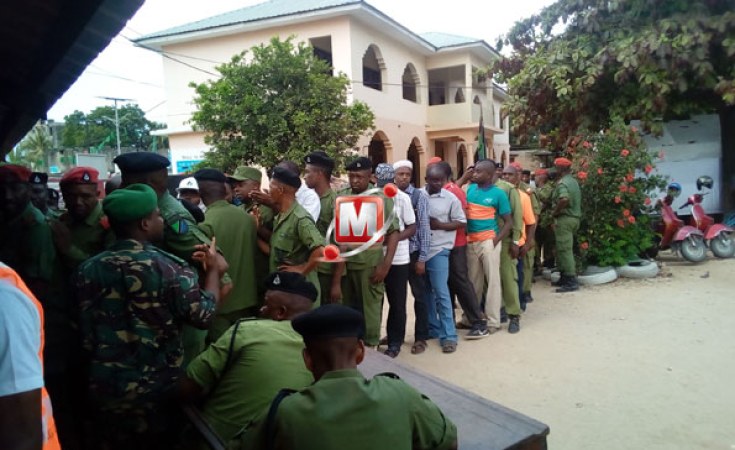 The Citizen
Security personnel and workers from the Zanzibar Electoral Commission line up to cast early votes at the Mwembeshauri polling station in Unguja on Tuesday, October 27.
The Citizen (Dar es Salaam)
By The Citizen Reporter

Zanzibar — With the rest of Tanzania voting in the General Election on Wednesday, October 28, 2020, polling started in Zanzibar for some groups on Tuesday, October 27, 2020.

Polling stations opened as early as 7am to allow defence and security personnel and officials of the Zanzibar Electoral Commission to cast their votes so that they can effectively supervise polling on Wednesday.

The exercise started peacefully in the morning, but there were reports of sporadic violence in some areas in Mjini Magharibi Region, prompting police to fire teargas to bring the situation under control.

In some areas, rowdy youth set tyres on fire on roads.

Police said they were forced to fire teargas to disperse people who were stoning vehicles that were distributing ballot boxes.

"We sensed that some civilians were out to disrupt peace and decided to act," Mjini Magharibi Regional Police Commander Awadh Juma Haji told 'The Citizen'.

While Tuesday's voting exercise was for special groups, Mr Haji said some civilians who were supposed to vote on Wednesday were seen at polling stations, adding that this was an indication "that they were out to disrupt peace, prompting police to act accordingly".

He said the situation had since returned to normal, and voting was proceeding peacefully.

Magufuli the Man to Beat As Country Goes to the Polls

Magufuli Declared Winner While Tanzania Opposition Cries Foul
Tagged:
Copyright © 2020 The Citizen. All rights reserved. Distributed by AllAfrica Global Media (allAfrica.com). To contact the copyright holder directly for corrections — or for permission to republish or make other authorized use of this material, click here.

Is Ethiopian Aid at Risk Due to War in Tigray Region?
Travel