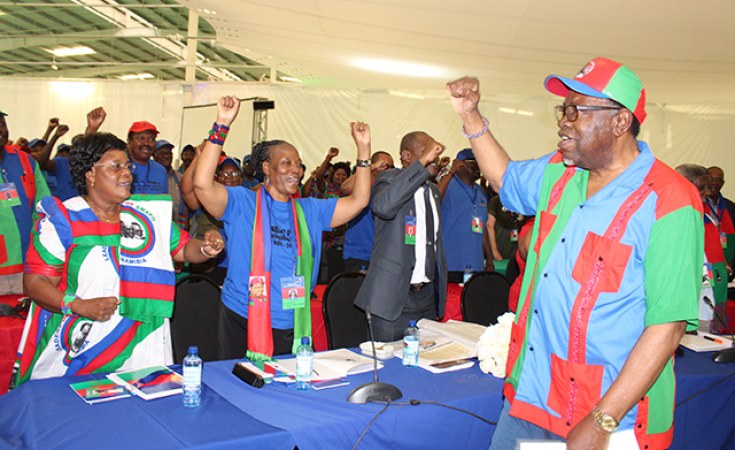 Swapo members of parliament have told their opposition counterparts they no longer want to be bombarded with allegations during parliamentary proceedings that the majority of them have benefited from the Fishrot corruption scandal.

Nandi-Ndaitwah said the issue of corruption and particularly the Fishrot scandal has started to lose relevance in the National Assembly because of constant accusations by opposition MPs.

"What you are really trying to say is not something new but you have been talking about it every day. We said we cannot be talking about it every day. The people who are alleged to have benefited are in prison and the law is taking its course. But you will hear people saying that if you are not arresting the people who are accused of corruption, you are actually condoning corruption," she said.

She was responding to remarks by Rally for Democracy and Progress leader Mike Kavekotora, who said corruption was part of many structural drawbacks which the government needed to urgently address to improve the country's economic performance.

Kavekotora was speaking during a discussion on the midterm budget review which finance minister Iipumbu Shiimi tabled in the National Assembly last week.

Kavekotora claimed the money lost through the Fishrot scandal had "a significant impact on the performance of our economy".

He further claimed that the revelation of the extent of assets owned by former ministers Sacky Shanghala and Bernhard Esau during the ongoing investigation into the Fishrot scandal was proof that the declaration of assets by MPs was not serving its purpose.

"I have a problem believing that honourable Utoni Nujoma has been declaring the right assets," Kavekotora said. "That has now been proven by the colleagues who are now in jail because of the Fishrot. Did they actually declare the actual assets that they had? We can go to where those assets are being stored. It will demonstrate that this declaration of assets is simply a lip service to what is intended."

Popular Democratic Movement leader McHenry Venaani said it was not an allegation that a majority of Swapo MPs have benefited from the Fishrot scandal.

"Members of the youth league [which received money linked to the scandal] are in parliament and nothing has been done about them. You have no moral authority to talk about Fishrot," Venaani told Nandi-Ndaitwah.

Fellow PDM parliamentarian Vipua Muharukua said it was evident that Swapo MPs were condoning corruption by constantly referring to the Fishrot scandal as the "so-called Fishrot".

"When a thief tells you that they have not stolen, know that they have indeed stolen. The former minister of justice [Shanghala] was sitting there. He was an ardent defender of the lack of corruption in Swapo. But today he is in jail. Namibians do not take Swapo for its words when it says there is no corruption. We take the records of Swapo as proof for its corruption," Muharukua said.

Nandi-Ndaitwah, however, challenged MPs alleging that Swapo members were beneficiaries of corruption in the fishing industry to provide evidence.

"The issues that you are talking about are not part of the budget. Bring the evidence to us and stop generalising. You want to blackmail Swapo. You must bring all the facts and Swapo will be there to defend itself," she said.

Nandi-Ndaitwah was backed by deputy minister of defence Hilma Nicanor, who said it appeared that opposition MPs wanted to paint Swapo as the party that condoned corruption.

"We have put it on record that the party has not received anything. We have put the record clear. You can look into Swapo's accounts, you cannot find Fishrot money," Nicanor said.