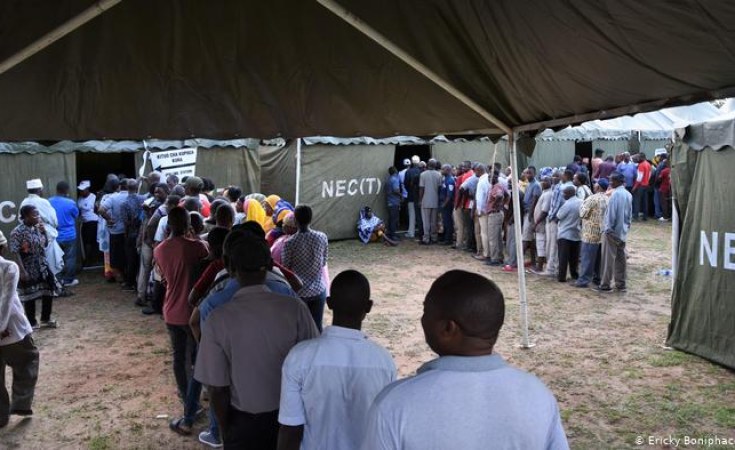 Tanzanians went to the polls for a presidential election on Wednesday, amid opposition complaints of ballot box-stuffing.

President John Magufuli, who heads the Chama Cha Mapinduzi (CCM) party, was seeking a second term in office. CCM has ruled the country since 1961.

Opposition figures and rights groups have accused President Magufuli of stifling democracy in a country that has long been seen as a bastion of stability in East Africa.

"If this continues, mass democratic action will be the only option to protect the integrity of the election," said Lissu, who survived being shot 16 times in an assassination attempt three years ago.

He later shared video footage of what he said was evidence of ballot fraud, with a man allegedly intercepted outside a polling station with a bag full of pre-filled ballots.

Chadema secretary-general John Mnyika told AFP news agency that one of their lawmakers in Dar es Salaam was briefly arrested after protesting the discovery of pre-filled ballot boxes.

In Zanzibar, party official Muhene Said Rashid also claimed that pre-filled ballots had been seized from CCM "zealots" and that party agents had been kicked out of some polling stations.

There were multiple reports of internet outages, with social media access problems and reported clampdowns on VPNs.

The president of Tanzania's electoral commission, Semistocles Kaijage, said there had been no official complaints about rigged ballots.

Any results declared by the electoral commission cannot be challenged in court.

Magufuli Declared Winner While Tanzania Opposition Cries Foul
Tagged:
Copyright © 2020 Deutsche Welle. All rights reserved. Distributed by AllAfrica Global Media (allAfrica.com). To contact the copyright holder directly for corrections — or for permission to republish or make other authorized use of this material, click here.

How Reckless Mining is Destroying Livelihoods in Zimbabwe
Sport