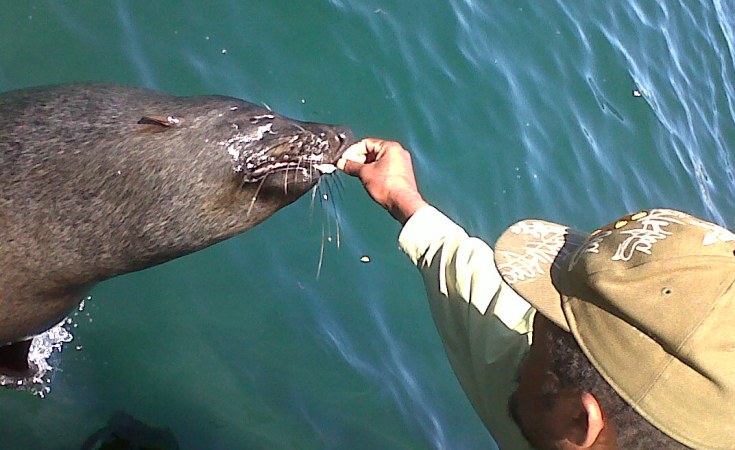 FEWER Cape fur seals are turning up dead at Namibia's Pelican Point near Walvis Bay, after thousands of dead seals were observed ashore in recent weeks.

This is according to conservationist Naude Dreyer, who was one of the first people to report the sighting of an estimated 5 000 dead preterm seal pups at the Pelican Point colony earlier this month.

Dreyer is one of the founders of non-profit organisation Ocean Conservation Namibia (OCN), which cares for endangered seals.

On Tuesday, he said premature births in seals occur every year, however, this year's observation was unusual and a great cause for concern.

He said among the additional 2 000 dead seals observed alongside the coast late last week, there were many adult seals and older seal pups.

No new unborn pups have been observed in the last few days, he said.

"There are a couple of thousand dead adults and older pups - pups that are one year old or so - but not too many new ones," Dreyer said.

He said this could be an indication that the worst has passed.

He also observed a slight return of life in the area, adding there have been more birds and more healthy looking seals at the area in recent days.

Currently, OCN and the Namibian Dolphin Project, another non-profit organisation that deals with marine life, are collecting samples from dead seals, which are being sent to South Africa for testing.

No results have as of yet been returned, and speculation still remains what caused the mass deaths.

While the animals' emaciated condition initially pointed to poor nutrition, Dreyer said it is unlikely the phenomenon was solely caused by hunger.

"This could be in conjunction with sickness. Of course, starvation can result in sickness, but it is unlikely that it is only starvation," he said.

A researcher and co-director at the Namibian Dolphin Project, Simon Elwen, on Wednesday said the research team recently surveyed sections of the coast between Pelican Point and Cape Cross, which has the largest colony of fur seals, about 150 kilometers to the north.

According to him, the abortions happened at both locations, but at Cape Cross it took place at a much lower rate and the seals there still appear fat and healthy.

"The majority of pup carcasses at both sites are now about two weeks old. At their highest densities, there was one pup every metre at Pelican Point and about one every three metres at Cape Cross, but they are quickly buried in sand or moved and eaten by scavengers, making it very challenging to count overall numbers," he said.

Corroborating Dreyer's observation, Elwen detailed that they are now seeing quite a high number of dead yearlings and female seals at both sites and along the beaches in between.

He added that this follows the same pattern seen in earlier die-offs of the seal population in the early 1990s and 2000s.

"Many females died ten to 14 days after the initial spate of abortions," he said.

According to Lüderitz Marine Research, an environmental conservation and awareness group that shares information about marine life, Namibia has had several events of mass miscarriages in its fur seal population over the last three decades.

The research organisation said these incidents have corresponded with years of extreme food shortages.

These food shortages have been linked to irregular oceanographic conditions, like low oxygen events and Benguela Niño events.

The recently launched 'State of the Climate in Africa 2019' report, produced by the World Meteorological Organisation, stated that 2019 was most likely the third warmest year for mainland Africa on record, following 2010 and 2016.

The report said 2010 and 2016 were also warm years globally due in part to El Niño conditions at the start of those years.

El Niño refers to the ocean-atmosphere climate interaction linked to a periodic warming in sea-surface temperatures.

The Benguela Niño refers to this process as it occurs on the south-western coast of Africa where the Benguela current flows in the Atlantic Ocean.

In Namibia, South Africa and part of Angola, 2019's surface temperatures were more than two degrees Celsius higher than the averages from 1981 to 2010.

These higher ocean temperatures result in the low solubility of oxygen in the water, meaning the ocean becomes increasingly deoxygenated.

According to the International Union for Conservation of Nature (IUCN), the consequences of declined oxygen in the ocean include decreased biodiversity, shifts in species distribution, displacement or reduction in fishery resources and expanding algal blooms.

"Ocean deoxygenation threatens to disrupt the ocean's food-provisioning ecosystem services," the organisation says on its website.

Although the seal situation in Namibia seems to be easing up, researchers fear that the effect could be long-term.

For this reason, they say it is imperative to determine the cause.