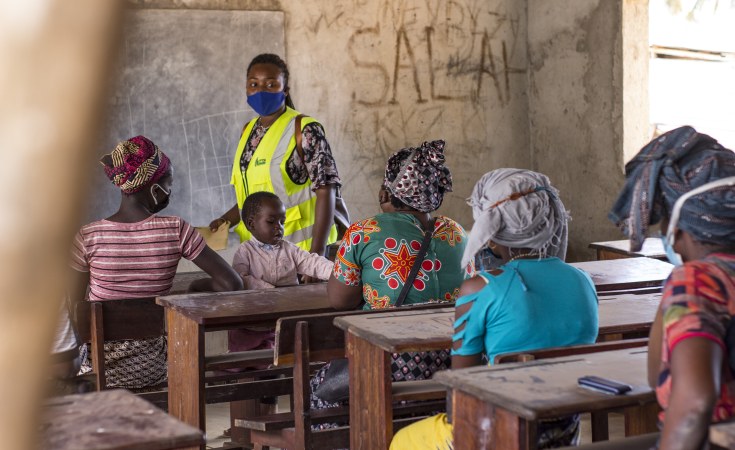 WFP
WFP is extremely concerned about the escalating conflict and deteriorating food security situation in Cabo Delgado, Mozambique, where over 300,000 people have fled their homes and villages, abandoning their crops and leaving them completely reliant on humanitarian assistance.
Africa In Fact (Johannesburg)
analysis By Stephen Buchanan-Clarke

To counter violent extremism in places such as Mozambique's Cabo Delgado properly, it's necessary to understand the root causes of such conflicts and how mining operations can worsen them

Since October 2017, Cabo Delgado province in northern Mozambique has been the site of an escalating insurgency, led by Islamist militant group Ahlu Sunnah Wal Jammah (ASWJ), which has claimed the lives of about 1,500 people and displaced 310,000.

On August 12 militants captured the port of Mocímboa da Praia, 60km south of the Afungi peninsula, where major liquid natural gas (LNG) export facilities are being developed for offshore reservoirs, reviving concerns about the effect of the conflict on LNG projects.

Both the government and mining companies routinely emphasise the enormous economic opportunity the LNG projects will bring to Mozambique and the "trickle down" potential they have for communities in terms of "job creation, supply and associated services industries".

In the case of Cabo Delgado, several analysts and President Filipe Nyusi himself have attributed the conflict to high levels of poverty and unemployment, and noted that these conditions are being exploited by foreign and local militants looking to recruit members. So rather than asking what impact the conflict will have on the LNG sector, we should ask what impact the LNG sector is having on local communities if we are to better understand how to prevent and counter violent extremism.

Unemployment and poverty alone do not predict the emergence of violent extremist organisations. Several studies show that relative deprivation, perceptions of marginalisation and discrimination, violation of human rights and a history of hostility between identity groups are far more relevant in predicting where such groups will emerge and how they will recruit from local populations.

But when mining companies enter regions where these issues are already present, they can greatly aggravate them.

The dark side of coal mining

In Mozambique's coal-rich Tete province many of the local communities that were resettled due to mining operations have faced significant and sustained disruptions in obtaining food, water and work.

In 2015, Oxfam and the University of Queensland's Centre for Social Responsibility in Mining published a study of the resettlement of 736 households (about 3,680 people) to make way for the Benga coal mine. It provides an insight into how poorly planned and chaotic these processes can be when there is a surge of foreign interest and competition that creates a context of rapid economic growth, limited regulatory capacity and intense pressure on land availability.

In 2011, Rio Tinto bought the mine for $3.7bn from Riversdale Mining. Three years later, after recognising an impairment of $2.86bn, it sold the mine to an Indian conglomerate for $50m -- less than 1.35% of the original price. During this period, a poorly planned and chaotic resettlement process was forced upon local communities, with disastrous consequences.

The study found: "In addition to food and water insecurity and the loss of supplementary income, the stress and trauma associated with forced displacement has fractured social networks and eroded trust between community members, local leaders, and company and government representatives.

"Uncertainty about the future, limited access to information and deficiencies in remedy processes further diminish the likelihood of recovery in a low-capacity environment."

Unsurprisingly, there have been several major protests by affected communities, many of them violent.

In April 2009 rubies were discovered near the city of Montepuez in Cabo Delgado. By the end of 2010 thousands of artisanal miners, or garimpeiros, were mining the deposits.

Over the next three years, multiple instances came to light of artisanal miners allegedly being beaten, shot and buried alive by the Mozambican police, the country's environment protection agency and private security companies.

There were also cases of local communities being forcibly removed from their land and of villages being razed to make way for MRM mining activities.

In 2018, while denying liability, Gemfields publicly recognised that "instances of violence have occurred on and around the MRM licence area, both before and after Gemfields' arrival in Montepuez".

The company then agreed to pay £5.8m to settle a case, brought before the London Supreme Court, in which 273 complainants alleged human rights abuses.

Back in Mozambique, there was little judicial action. The attorney-general announced an investigation, but it was never concluded. No serious steps were taken to seek justice for victims or to put policies in place to address the use of force against communities affected by the extractive industry.

Fallout in the Rovuma Basin

Hundreds of families have been forced to resettle away from their ancestral farmland and fishing grounds to make way for onshore support facilities for the projects.

A March 2020 report by environmental body Justiça Ambiental argues that the resettlement process was deeply flawed: communities were not adequately consulted, lacked knowledge about their rights and were too intimidated to voice discontent for fear of retribution.

Speculative investing in land in anticipation of the gas boom -- often by Frelimo elites -- has also fuelled resentment among villagers, who continue to lose access to land and sustainable livelihoods.

In rural areas particularly, land is inextricably linked not only to livelihoods but also to identity, culture and history.

Some of the strongest research on violent extremism, by scholars such as psychologist John Horgan, suggests that radicalisation is a process deeply connected with identity. In this context land dispossession may be particularly damaging to the psychological, social, and cultural resources that sustain a sense of wellbeing and bolster resilience to radicalisation.

The displacement and marginalisation of coastal communities in Cabo Delgado is especially concerning, given pre-existing ethno-religious fault lines.

The Cabo Delgado coastal zone has traditionally been occupied by the Muslim Kimwani-speaking people, who rely predominantly on trading, fishing and seafaring.

Many Muslims in the province backed Frelimo's independence struggle against the Portuguese. However, since the first multiparty elections in 1994, Kimwani speakers have tended to vote for Renamo, and results in Mocímboa da Praia have been close.

As journalist Joseph Hanlon writes: "Local Muslim leaders have always been annoyed that their role in the independence struggle was not recognised, and they see the largely Christian Makonde speakers from Mueda and Muidumbe districts dominating Frelimo and moving into the coastal areas."

Today, the Makonde form the local elite in Cabo Delgado, while the Kimwani-speaking people are among the poorest in the province and the most negatively affected by the LNG projects.

It is unlikely that the substantial number of jobs created by the LNG projects will go to local coastal communities, given low levels of formal education and the investment in training and support needed to equip community members with the requisite skills.

Any poverty reduction from jobs that do go to these communities has likely already been offset by the thousands of local citizens who have lost access to fishing grounds and small-scale agricultural production.

For communities living in the region, the security situation has deteriorated significantly over the past two years. Not only have they been victim to dozens of attacks by ASWJ, but the region has become highly securitised. Local communities report "living [in] constant fear of mistreatment by the military and by private security actors rather than feeling protected from the attacks".

In late August, Total's subsidiary in the region announced it had signed a memorandum of understanding with the government. The government will deploy a joint task force from the defence and security forces (FDS) to ensure security. In return, the Mozambique LNG project will provide logistical support to the FDS, including equipment and subsidies for troops.

As Mozambique's Centre for Democratic Development notes: "In allowing the deployment of FDS troops to protect private interests in exchange for monetary payments, the government is privatising the FDS services and, consequently, violating the Defence & Security Policy."

The FDS is already stretched beyond the point where it can effectively protect communities in Cabo Delgado.

While the defence of strategic interests is one of the fundamental roles of the ministry of defence, it is easy to see how this relationship between the military and LNG sector would be viewed differently by a local population exposed to violence at the hands of armed groups, private military companies and government security forces on a weekly basis.

The UN secretary-general's plan of action to prevent violent extremism emphasises the need for a "whole of society" response, including sustainable development, humanitarian action and upholding human rights and the rule of law.

In Mozambique in particular, the mining sector has an outsized responsibility to prevent and counter violent extremism.

Mining companies will have to work with the government to tackle the grievances already generated by the sector -- particularly around disputed resettlement processes and human rights violations -- and work to address the underlying causes of extremism.

Natural gas revenues will only begin to accrue by 2024, so there is still time for Mozambique to prioritise sustainable development, inclusive growth and better policies to manage large extractive industry investments.

An Angolan scenario, where a political elite captures all the local content opportunities, will only serve to increase grievances and swell the ranks of the insurgency.

Stephen Buchanan-Clarke is a security analyst with several years of experience working in both conflict and post-conflict settings in Africa, primarily on issues of peace and security; transitional justice and reconciliation; democratisation and governance; and preventing and countering violent extremism. He currently serves as head of the Human Security and Climate Change (HSCC) project at Good Governance Africa and is a co-editor of the Extremisms in Africa anthology series.