Tanzania: Meet Tanzania's Gertrude Mongella, 75, Who Led the World to Historic Beijing Conference On Women in 1995 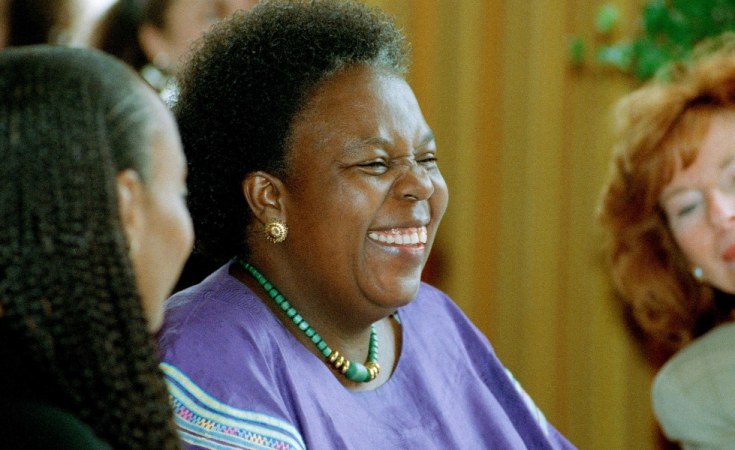 Ms. Gertrude Mongella of Tanzania was the Secretary-General of the Fourth UN World Conference on Women held in Beijing, China, in 1995. They went, they saw, they conquered and lived to tell the story... 25 years later. She spoke to the UN's Stella Vuzo about the Beijing conference and on the UN at 75.

Who is Gertrude Mongella?

Ms. Mongella was born in September 1945 on a small island in Lake Victoria in Tanzania.

She is an educator, a defender of women rights, a politician and a diplomat.

She served in the Prime Minister's office responsible for Women's Affairs from 1982 to 1985. She was a Member of the Parliament in Tanzania, as well as in the East African Legislative Assembly and the Pan-African Parliament.

In 1993-1995, as a diplomat to the UN she led the Fourth World Conference on Women as the General Secretary and Chair, where she significantly contributed to the success of the conference and has since been known as "Mama Beijing".

The Courier magazine at that time reported that Ms. Mongella's "tremendous personal energy" greatly contributed to the Beijing conference's success. It reported how her commitment and maternal warmth (which conceals a steely determination), helped in the conference's trickier moments. She had to reconcile the irreconcilable: trying to bring countries at opposite ends of the moral spectrum together to agree on a final text.

Moreover, it is a text which, for the first time in an international diplomatic forum, deals with sensitive questions like women's sexuality. You could sense her apprehension, even when she replied with a smile that all was going well.

Ms. Mongella was the 'Mother' of the Beijing conference, and is one of the inventors of the women's diplomacy for which Beijing will be long remembered. It was a world first that important decisions at this level were taken by a forum comprised almost wholly of women.

Patience, tenacity, respect for one another's opinions and simplicity were the key features of this diplomacy and all of these attributes were embodied by Ms. Mongella.

She is highly committed to the political integration of Africa, as well as championing a strong involvement of women in political leadership.

Can you tell us a bit about yourself?

I am Gertrude Mongella, popularly known here in Tanzania as 'Mama Beijing' because of the role I played as the Secretary-General of the UN World Conference on Women in Beijing 1995.

I had a wonderful time preparing for the conference. I came to understand and appreciate more about the United Nations, its functions and the role it plays in the world.

You turned 75 this year. The UN turned 75 too. What's your experience with the UN?

I am very happy today, first because I am alive. The fact that I survived at birth as a baby girl because when I was born 75 years ago, many baby girls did not survive. I was born on an island in Lake Victoria, and then went to get an education on the mainland of Tanzania.

I was born in September 1945 and the UN was born a month later in October 1945. I don't know whether my mother knew that as she was bringing to the world this baby girl, an important organization was also being born. I am proud to be part of the UN. I am proud to be an international citizen of the world.

My participation in UN issues and events gave me the exposure to the world and widened my scope. It developed me to be able to tolerate others, even when we differ. I have had the opportunity to travel around the world, including to Beijing, where I met a lot of people of different cultures and it was enriching to me. I would like to say that the UN is important because it has brought people of different nations together. The UN's membership has grown over the years to include members who were not there during its inception, including from Africa.

What would you say are three key achievements of the Beijing conference?

Firstly, the conference brought together one of the biggest number of delegates seen anywhere in the world. About 15,000 people met in Beijing to discuss issues affecting women. It remains one of the largest conferences ever.

Secondly, the conference brought to global light issues of gender equality and women's empowerment. It brought a kind of 'revolution' where we have to look at women and men as equal citizens of this world. Women should not be considered like 'invitees' on this planet. They belong to the planet just like the men. The Platform of Action which was adopted in Beijing at the end of the conference is the most important document I have ever come across in my life. It's an honour that I participated in the production of this document, together with others from all over the world.

Thirdly, the UN has helped raise the status and dignity of women in the global arena.

What's your take on Agenda 2030 on sustainable development?

We need to work together to make it work. We need to partner with men, we cannot make much achievement alone. We should not leave men behind because there is danger if we marginalize men. We should always endevour to educate women and empower them economically.