Tony Webster/Wikimedia Commons
A line of police tape at a shooting in Minneapolis, Minnesota, at night.
Deutsche Welle (Bonn)

The Pentagon confirmed that an American hostage who was abducted in neighboring Niger has been freed. Africa's Sahel region is struggling with a jihadist insurgency that has claimed thousands of lives.

US special forces mounted an operation in Nigeria to free an American citizen who had been kidnapped by armed men, the Pentagon said Saturday.

Forces including Navy SEALs rescued 27-year-old Philip Walton, who had been abducted on Tuesday from his home in neighboring southern Niger, officials said.

No US troops were hurt in the operation on Friday night but several of his captors were killed.

"I confirm the American hostage was released last night," Niger's Defense Minister Issoufou Katambe said, without giving details of the circumstances of the release or the hostage's whereabouts.

A diplomat source told The Associated Press that Walton is now at the US ambassador's residence in Niamey, the capital of Niger.

He later tweeted: "Last night, our Country's brave warriors rescued an American hostage in Nigeria. Our Nation salutes the courageous soldiers behind the daring nighttime rescue operation and celebrates the safe return of yet another American citizen!"

"The United States is committed to the safe return of all US citizens taken captive," Secretary of State Mike Pompeo said in a separate statement.

"We delivered on that commitment late last night in Nigeria, where some of our bravest and most skilled warriors rescued a US citizen," he added.

Where was Walton kidnapped?

Walton was kidnapped by six men armed with AK-47 assault rifles who arrived on motorcycles at his home in southern Niger's Massalata village early on Tuesday.

Reuters reported that the perpetrators appeared to be from the Fulani ethnic group, and that they spoke Hausa and some English.

They demanded money and searched the family's home before leaving with Walton.

His wife, young daughter and brother were left behind.

Local officials had said this week that the kidnappers had called the man's father to demand a ransom, though the family did not confirm this.

Niger lies in the heart of the vast Sahel region, which is struggling with a jihadist insurgency that has claimed thousands of lives and driven hundreds of thousands from their homes.

Several Westerners are currently being held hostage in the region, including American aid worker Jeffery Woodke, who was kidnapped in the central town of Abalak in 2016 and is believed to be in neighboring Mali now.

Statement From the President On Last Night's Hostage Rescue 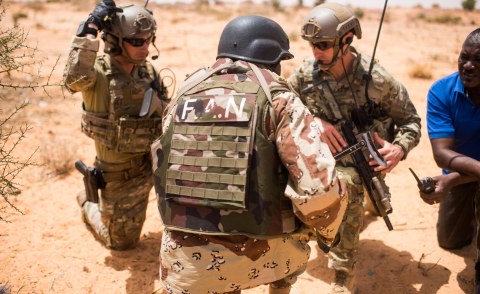 As Nigeria Crosses Rubicon, U.S. Policy Must Change
Tagged:
Copyright © 2020 Deutsche Welle. All rights reserved. Distributed by AllAfrica Global Media (allAfrica.com). To contact the copyright holder directly for corrections — or for permission to republish or make other authorized use of this material, click here.