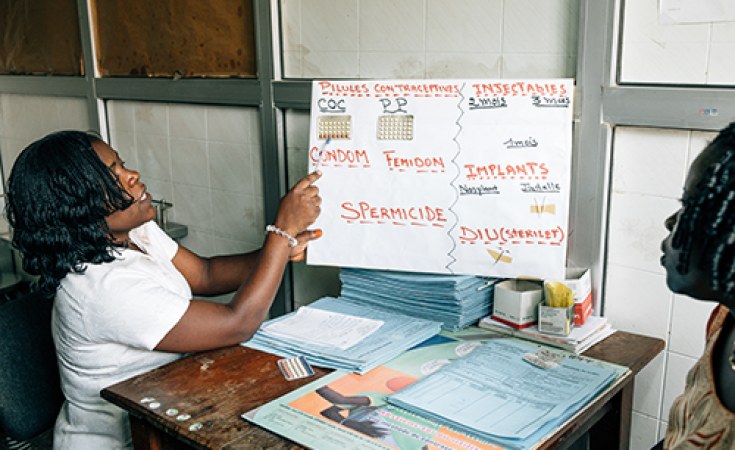 Ollivier Girard/UNFPA
A nurse in Benin provides family planning counselling. Around the world, health systems affected by the pandemic may curtail such services.
Radio France Internationale
By Laura Angela Bagnetto

At least 20 US-based Christian right-wing groups have poured more than 50 million euros into the African continent to oppose sex education, contraception, abortion, and LGBT rights, funnelling cash into what openDemocracy describes in a new report as an 'opportunistic use of Africans'.

"Americans seem to be really invested in the politics around the personal... there's very little ground to gain... so they're looking for new ground to gain, which is imperialist, not that imperialism is alien to the American identity," says Lydia Namubiru, openDemocracy's Uganda-based Africa editor.

The report by the UK-based political website says since 2008, a number of US Christian right-wing groups, many which are now linked to the Donald Trump administration, have spent millions of euros in sub-Saharan Africa in order to exert their influence on the shape of reproductive rights and LGBT issues.

The message takes many different forms, as the groups meld their conservative message to each country they operate in.

Investing in ideology, not people

"In Uganda, it used to be amplifying abstinence only, which turned out to be problematic because it was not effective. Money that could have been used to save lives went to promoting this ideological message and avoid having sex," Namubiru tells RFI.

One group that opposes contraception and abortion, Heartbeat International, has created affiliated 'crisis pregnancy centres' that actually try to convince women to not abort, according to openDemocracy.

In Uganda, where abortion is illegal, these type of 'clinics' also press for women not to use any sort of contraception.

They tend to target teenagers, poor people, people who are basically more vulnerable and don't have access to other information, says Namubiru.

And young people continue to receive confusing and conflicting messages about relationship, sex, and even gender, according to Patricia Machawira, UNESCO health and education advisor for eastern and southern Africa.

"Government and the education sector in sub-Saharan Africa have both an opportunity and an urgent responsibility to scale up sexuality education programmes," said Harare, Zimbabwe-based Machawira.

Clinics such as these operating in South Africa were also deemed to be illegal, according to a previous report by openDemocracy.

"These centers don't have the regulation of health authorities because they do not register as health centers, it's a charity," she says, adding that they do offer counseling, which is a health service.

"Their general pursuit is to push back on any progress made on sexual reproductive rights for women and LGBTI people," says Namubiru, adding that in Uganda, the US Christian conservative right focus went from abstinence to homophobia.

In 2009, Ugandan MP David Bahati introduced an anti-homosexual bill to parliament, advocating the death penalty for gay people who are HIV positive and have sex, that become known as the "Kill the Gays" bill. Bahati is the member the secretive US-based Christian right-wing group Fellowship Foundation, which promotes these values.

The Fellowship Foundation has put the most money behind these initiatives, with a total of 29.5 million euros throughout the continent, openDemocracy reports.

Forcing US personal politics on Africa

US Christian right-wing groups, including the Billy Graham Evangelistic Association, Human Life International, and Bethany Christian Services are some of the top contributors pedaling their conservative values on the continent, according to the report.

Namubiru says that the American Christian right wing is pushing its agenda not only in Africa, but throughout the world.

"Part of the American national identity is thinking of themselves as exemplary, and therefore the one example that other nations should follow-- the US is exceptional so it can go out and evangelize," she says.

While in the United States, Americans are invested in personal politics, surrounding pregnancy and politics of the body, the fighting has gone on for a long time and there is little ground to gain because it is so polarized, says Namubiru.

American evangelicals who make it a mission to impose these conservative views on non-Americans, is imperialistic, she contends.

"People who are driven through imperialism are not necessarily going to listen to the people who are resisting that imperialism. It's not exactly a consensual relationship," she says, noting the manipulation.

What she wants to see is people on the continent come up with their own arguments to counter this.

"That's really for me the most disappointing--the sort of blindness or unwillingness to look into this and separate ourselves from it," says Namubiru.

"We don't have to be proxies for cultural issues that are happening elsewhere," she adds.

If you're interested in issues concerning the African continent, you can find RFI's new weekly podcast Africa Calling, now online.