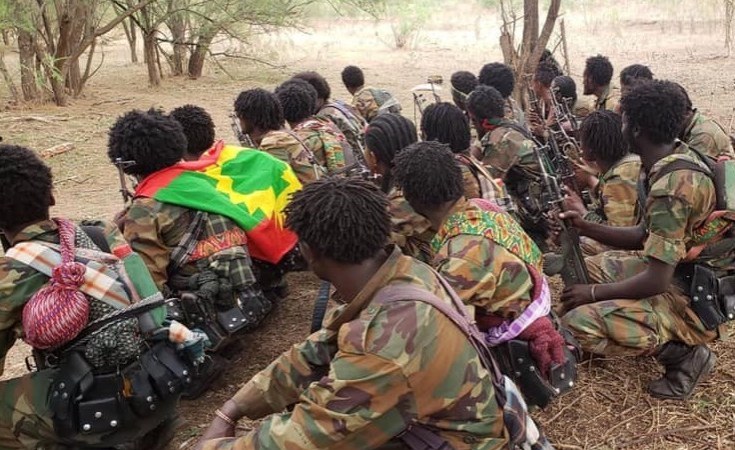 According to survivors who spoke to a YouTube channel called Amara Media Center, members of the Amhara community who were in area were called to assemble in a school compound where they were "summarily executed" by what the survivors who ran away and survived said were "members of OLF/Shene" rebel group.

According to the account from at least four witnesses who spoke to the channel, the killings took place yesterday shortly after the evacuation of members of the federal armed forces from the area.

The surviving witnesses said they have begged the federal armed forces not to leave the area, where the federal government is engaged in an ongoing civil war with members of Oromo Liberation Army (OLA), a breakaway armed faction from the Oromo Liberation Front (OLF), but their pleas were not heard.

Most parts of Wollega in western Oromia and Guji in southern Oromia are under the federal command post since two years. Please click here to read Addis Standard's comprehensive coverage on the civil war in these areas.

The details are still coming out, however, Oromia regional state communication bureau was the first to issue a statement admitted the killing of civilians and blaming "OLF/Shene" and "TPLF".

President of Tigray regional state, Debretsion Gebremichael (PhD) is quoted by Tigray Mass Media Agency as saying the conspiracy by "the unitarist, illegal federal government" against the people of Tigray was shifting to the use of force and called on the people of Tigray to prepare. But it is not clear if his statement is related to or intended as a response to reactions from Oromia and Amhara regional states.

Shimelis Abdissa, President of Oromia regional state, issued a statement in which he vowed that Ethiopia wasn't going to collapse because of the conspiracy between the "OLF/Shene and the TPLF."

President Shimelis' strongly worded statement blamed TPLF for sowing the seeds of hatred between the Amhara and Oromo people. But when that didn't work, TPLF uses "OLF/Shene" as a Trojan Horse, arming it, providing it with logistics and financial support in order to target civilians, the president's statement said. Measures against the armed group will be intensified, he said.

In a statement it issued today, the Amhara Prosperity Party, the ruling party of Amhara regional state and a part of Abiy Ahmed's Prosperity Party (PP), called for the National Security Council to consider the targeted attacks against members of the Amhara community in various parts of the country as "a threat to the national security." The statement also demanded the federal government to give detailed report about these attacks.

In addition, the party accused the TPLF group functioning from Mekelle as playing gamble on the lives of the Amhara people and the root cause of the problem. This group is the source of a threat to the security of the country and a center of chaos. In order to secure regional peace, the time was now to deal with the group "once and for all." AS

Editors' note: Our team of reporters are attempting to interview survivors and will update this story accordingly.

Over 50 Killed in 'Horrendous' Attack On Village By Armed Group