Kaduna — The 19 northern state governors yesterday said Nigeria remains indivisible, a stand seen by many as a response to those calling for the breakup of the country.

The governors who met in Kaduna over recent happenings also advocated for a major control mechanism and censorship of the social media practice in the country.

The meeting held at the Sir Kashim Ibrahim House had in attendance chairmen of traditional councils of the 19 northern states.

Other top government officials at the meeting included the Chief of Staff to the President, Prof. Ibrahim Gambari; Senate President Ahmad Lawan; Deputy Speaker of the House of Representatives, Ahmed Idris Maje, FCT Minister, Mohammed Bello; Minister of Information and Culture, Lai Mohammed and the Inspector-General of Police, Mohammed Adamu.

The Sultan of Sokoto, Muhammad Sa'ad Abubakar led the emirs of Gwandu, Zazzau, Hadejia, Bauchi, Etsu Nupe and the Tor Tiv. Others were emirs of Lafiya, Fika, Zamfara, Kano, Gumi as well as the Ona of Abaji and the Mai Kaltungo.

Of recent, agitations for the Biafran nation and in some cases multiple countries are being promoted especially through social media.

Experts say governments at all levels were finding it tough controlling what went out to the public through social media and the interests generated.

They said this had heightened the clamour from many quarters for concrete action to save the country.

However, the call for censorship of social media has remained a contentious issue with those in defence of free speech saying what is needed is regulation and monitoring instead of outright censorship.

During the security meeting, the governors noted the devastating effect of the "uncontrolled social media in spreading fake news."

A 20-point communiqué read at the end of the meeting by the Chairman, Northern State Governors Forum (NSGF) and Governor of Plateau State, Simon Bako Lalong, condemned "the subversive actions of the #EndSARS protests" and called attention on the need to keep a strict watch on the FCT to guide against "unwarranted and destructive protests to safeguard critical assets of the nation."

While endorsing the indivisibility and oneness of Nigeria, the northern governors appreciated President Muhammadu Buhari and his cabinet for meeting the demands of the #EndSARS protesters.

They resolved to give the president maximum support as he rolled out measures to address the lingering challenges of youth unemployment, banditry and Boko Haram insurgency in the country.

The governors condemned attacks on persons and properties of especially those living in other parts of the country and burning of places of worship.

They added that the protests did not escalate in the north due to the active role of traditional leaders.

While calling for a push for amicable resolutions of the protracted ASUU strike to enable students to resume their studies, the governors called for further engagement with other critical stakeholders such as religious leaders, the business community as well as youth leaders.

Speaking at the event, IGP Adamu said that the #EndSARS protests, which snowballed into a security challenge in some parts of the country were instigated by fake news that emanated from Ughelli in Delta State.

He told the government officials during a closed-door session at the Council Chamber of Sir Kashim Ibrahim House, that the security agents in Ughelli in the video posted online did not in any way involve SARS operatives and said the suspect responsible for the video has been arrested and arraigned before a court.

In his presentation, the police boss said on that fateful day, operatives of Operation Delta Safe; a state government sponsored joint security outfit comprising of the military, police and other security agencies, while on routine patrol around Ughelli Township, accosted a Lexus jeep.

He said on citing the approaching patrol team, the occupants of the jeep dangerously engaged the reverse gear in an attempt to escape and evade the joint security team's scrutiny. "This elicited the suspicion of the patrol team as the incident occurred in an area that had witnessed a series of kidnapping."

He said unknown to the driver of the Lexus jeep, Operation Delta Safe move in pairs because of the volatility of the area. "The patrol team coming behind subsequently intercepted the escaping vehicle and arrested the two male occupants."

The IG said the suspects were moved into the patrol vehicle while a police officer drove the Lexus jeep to the Ughelli Police Station with the intention of a detailed investigation.

He, however, said while moving, one of the suspects, Joshua Ambrose jumped out of the moving patrol vehicle and sustained bruises on his head and body.

"The patrol team stopped to attend to the situation and they were mobbed and had to tactically retreat to prevent possible violence.

"While this was going on, one Malcolm Nicholas who was at the scene recorded the incident and uploaded it on social media with a false tag that SARS operatives had just shot someone dead at Ughelli, Delta state."

"The false news soon went viral and inflamed national passion, which eventually formed the rallying point for the protest. The said Nicholas has been arrested charged to court under the law," he said.

The IG said Joshua Ambrose, the injured suspect was neither shot nor dead as portrayed in the false social media news by Malcolm Nicholas.

In his speech at the meeting, Governor Nasir El-Rufai called for a redesign of the country's security architecture.

He said there was a need for collaboration between the states and the federal government to increase the number of police personnel, equipment and technology.

El-Rufai said this was the time to make the establishment of state police a key part of policing reforms.

He said that the recent #EndSARS protests, which snowballed into serious crises had exposed the inadequacy of the numbers, ordinance, training and unitary structure of the police in the country.

According to El- Rufai, "the Constitution of the Federal Republic of Nigeria had envisaged the need for this by creating the Nigeria Police Council in section 153(1)L and defined the membership to include all state governors.

"In this regard, I wish to seize this opportunity of the presence of this high-level federal delegation to appeal that the quarterly meetings of the Police Council be initiated and sustained so that the important issues to improve national policing effectiveness be interrogated, debated, agreed and addressed," he said.

El-Rufai said that many northern states were confronting a variety of security challenges such as banditry, which had threatened the economy in the rural and urban communities.

While speaking on the recent destruction to lives and properties following the #EndSARS protest, El-Rufai said the economic damage from the tragic events will exacerbate the shrinkage unleashed by the COVID-19.

"The impact of this on jobs and livelihoods will be severe. The crisis has also exposed the worrying ascent in the public discourse of a new sort of relativity that can justify anything. Amidst the mayhem in many parts of the country, there has been a shocking absence of a collective will to stand up for law and order, and those that are at the frontline of law enforcement," he said.

'Our leaders must go beyond rhetoric'

Two security experts spoken to yesterday commended the 19 northern state governors, traditional leaders and representatives of the federal government for coming together but urged them to translate what they discussed into action.

Salihu Bakhari who retired from the military said Nigeria is meant to remain an indivisible country. "Many people from within Nigeria and abroad thought that the recent #EndSARS protests would lead to disintegration but here we are- stronger and more focused.

"I monitored the Kaduna deliberations and I am impressed. I hope governors from southern Nigeria would also make a strong declaration and then the 36 state governors should meet and come up with a strong paper on the unity of the country, state police and other contentious issues so that they could be resolved.

"The president should also listen to them and act fast," he said. On his part, Barr. Uche Sam said the federal and state governors should not allow a repeat of the #EndSARS protests.

"The youths have realised the power at their disposal and it is no longer possible to take them for a ride. Leaders should do the needful by being fair, proactive and sincere," he said. 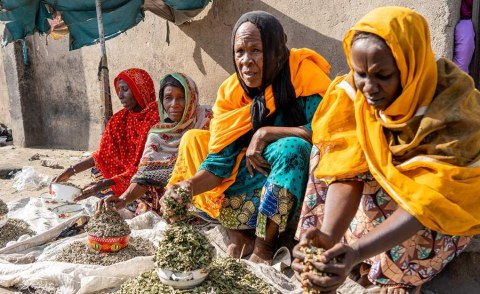 How Boko Haram Conflict Impacts Older People in Nigeria - Amnesty
Tagged:
Copyright © 2020 Daily Trust. All rights reserved. Distributed by AllAfrica Global Media (allAfrica.com). To contact the copyright holder directly for corrections — or for permission to republish or make other authorized use of this material, click here.