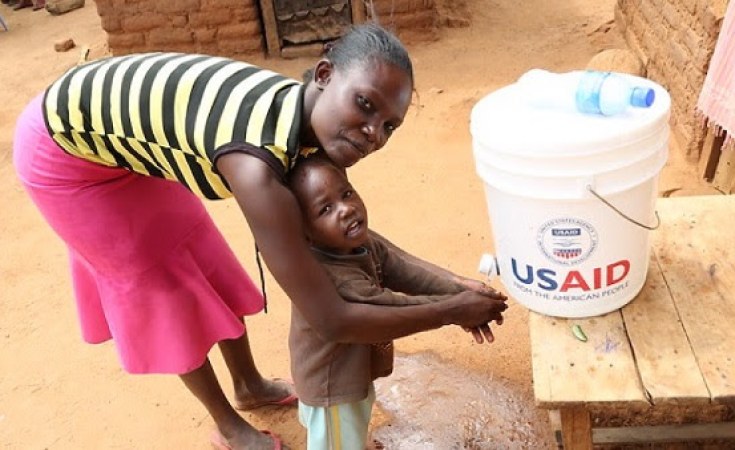 Nairobi — The corona virus pandemic is impacting Africa's population in quite differentiated ways and is significantly entrenching inequality. At the greatest risk are lives and livelihoods of the poor.

Millions are being pushed further into hunger and poverty. Children have been forced out of school with many of them, particularly girls, having a slim or no chance of accessing education again.

Without access to piped water and no food reserves, women have had to bear the biggest burden of the pandemic and risked exposure to the virus to keep families going. Reversal of the gains made during the Millennium Development Goals (MDGs) era, ais now more likely than ever.

Leaders must refuse to take the easier option of failed economic models that allow few rich people to build their wealth off the backs of the poor and thrive even in the middle of a pandemic. Political and business leaders must take bold steps towards building a human economy for all Africans

This crisis has clearly shown how critical publicly funded public services are to dealing with pandemics. Decades of underinvestment in public services and social protection systems have left the majority of governments woefully unprepared to tackle Covid-19, according to the Commitment to Reducing Inequality Index, an analysis published recently by Oxfam and Development Finance International. The report ranks 158 countries on labour rights, taxation, and spending on health, education and social protection.

While Africa and its people have seen its fair share of crises in the past and exhibited appreciable levels of resilience and 'bounce back', Africa shouldn't forget the Covid-19 crisis, like the many crises before, and adopt a "business as usual" approach to recovery.

Leaders must refuse to take the easier option of failed economic models that allow few rich people to build their wealth off the backs of the poor and thrive even in the middle of a pandemic. Political and business leaders must take bold steps towards building a human economy for all Africans.

An economy where the size of your bank account does not dictate how long you live or how many years your children spend in school. An economy that rewards and guarantees dignity for workers, especially with the coming into force of the African Continental Free Trade Area (AfCFTA). An economy where big corporations and the rich pay their fair share of taxes and public resources are not used for private benefit

A more just and human economy is achievable!

Excitingly, a few African governments are taking steps towards building an economy that works for all, not just a few super-rich and big corporations. They agree that inequality is not inevitable but a consequence of their choice of policies.

Sierra Leone has remained true to its commitment of making secondary education free for all. To improve its tax collection, it is cracking down on unnecessary tax incentives and clamping down on tax evasion by mining companies.

Ethiopia has consistently stood out globally for spending the second-highest proportion of budget on education - the greatest equaliser in society. It has increased spending on health and social protection with tangible impact on poverty and inequality reduction.

Namibia, a country with a poisonous legacy of high inequality and colonial expropriation has been able to introduce payments to support workers in the informal sector who have lost their jobs during the pandemic. A new World Bank study has found that Namibia's taxation and spending policies are reducing inequality significantly. These governments can do more and there is much that other African leaders can learn from them.

Africa should defend its tax revenues to finance a people's recovery. Across the continent, tax collection has been on a decline with public debt stocks on a sharp rise. This trend needs to be reversed. Governments should stop taking the easy road of debt and instead put a halt to the bleeding of legitimate revenues through tax dodging and ruinous tax competition.

West Africa, a region that has lost over 2,500 lives to corona virus, for example, loses an estimated $9.6bn annually from wasteful corporate tax incentives. This lost revenue is enough to build 100 modern and well-equipped hospitals each year. Indeed, the region could have been better prepared to deal with the pandemic.

While global solidarity and action is required to truly turn things around, political will is needed now, more than ever, to implement the recommendations of the Thabo Mbeki led high level panel on illicit financial flows.

African countries can individually take action to review, renegotiate or cancel tax treaties that expose them to profit-shifting and treaty shopping, and collectively pursue a minimum effective tax rate for the profits of multinationals.

At the beginning of the pandemic, African Finance ministers asked for a waiver of all interest payments for 2020, which were estimated at $44bn to allow governments more fiscal space. Sadly, the G20's response has been underwhelming.

The much-needed resources to save lives and protect economies has continued to flow from poor African countries to foreign banks in rich countries. For example, in 2020, 69 per cent of all debt payments due in Zambia is owed to private creditors.

African governments should consolidate and raise their voice on the urgent need for global action on debt. Private lenders and multilateral institutions such as the World Bank should be compelled to join the Debt Servicing Suspension Initiative (DSSI).

Governments and their citizens must learn from the structural adjustment programme and push back on any austerity being imposed through new financing. Already, 84 per cent of the Covid-19 loans by the International Monetary Fund (IMF) encourage, and in some cases require, countries to adopt more tough austerity measures in the aftermath of the health crisis. Any cuts in social spending or increase in regressive taxes such as value added tax (VAT) on food items will be borne by the poor further widening inequality.

Developed nations should also pay their financial and moral debt. Aid is not only a means of channelling additional financing to developing countries but also a form of redistribution, especially in a global economy where inequality is alarmingly high and characterised by an extractive, colonial and racial history.

The year 2020 marks the fiftieth anniversary since rich nations committed to spend 0.7 per cent of their gross national income (GNI) on aid to low-income and middle-income countries, a majority of which are in Africa.

Fifty years later, this figure stands at a mere 0.3 per cent, on average. According to Oxfam's calculations donor countries owe $5.7 trillion to the poorest people. With the pandemic, there must be a renewed political commitment to international aid and a move from a charity-based system to one based on justice.

To build a more human and just economy, Africa must shun economic policies that trap Africans in indignity. African political and business leaders can choose to build back a divided Africa - one where just three men have more wealth than the bottom 50% of the population. Or they can choose the right path of building back an Africa for all, by promoting efficient and progressive tax systems, investing in free, quality and gender-responsive public services and social safety nets that reduce the burden of care on women and girls, and protecting the rights of workers to dignified work and wages.

This is not the last pandemic. A more equal Africa will cope much better with the next pandemic.