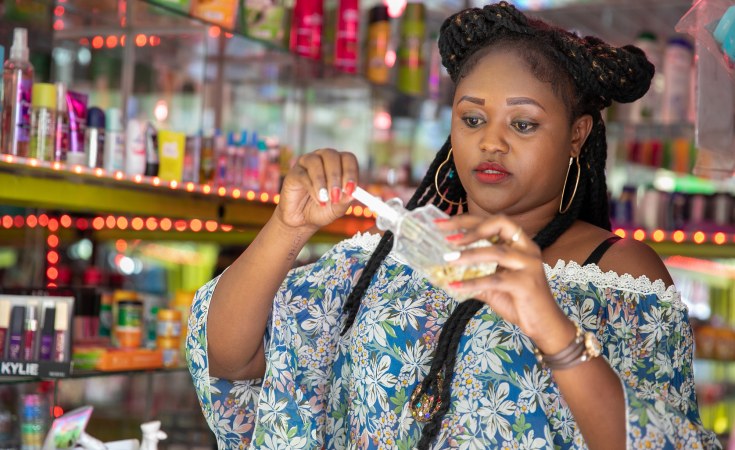 Mastercard Foundation
Wendy Chelgat helping to drive the Kenyan economy as a passionate MSME owner of a thriving beauty shop in Nairobi (file photo).
The Nation (Nairobi)
By Vincent Achuka and Peter Mburu

President Kenyatta is today expected to address the nation on how his government intends to arrest the runaway Covid-19 numbers amid calls to tighten health and security protocols.

Mr Kenyatta's address, which will be his 13th since the outbreak of the pandemic, will come on the backdrop of the sixth extraordinary session with governors on the pandemic.

Stakeholders are expected to give their views on whether to continue keeping the economy open or shut it down again to save lives and cushion the health system from collapsing.

In just a month since the economy was fully re-opened, Covid-19 cases have spiked by a staggering 341 percent.

By yesterday, the numbers had surged to 57,093 after 492 more people tested positive from a sample size of 3,728. Twelve more people died bringing the toll since the first case was reported in March to 1,039.

With these high transmission rates, an economy in the middle of its first recession in 12 years and a health system on the brink of being overrun, the choices Mr Kenyatta makes today will greatly shape the remainder of his term in office.

Among the choices he has to make is whether to ban political rallies, stop inter-county travel, increase curfew hours, shut down schools, close bars and restaurants and limit social functions.

Sources close to the presidency have told the Nation that, by last night, it had been agreed that political events should be banned until further notice and curfew hours increased.

Deputy President William Ruto, who has been very active politically, last evening said he was scaling down his activities.

"The upsurge in Covid-19 cases strongly indicates that a second wave may be in the offing. For this reason, I have decided to significantly scale down my public engagements until further notice. The empowerment meetings for this weekend in Machakos, Kitui and Makueni are postponed," he tweeted.

Machakos Governor Alfred Mutua, who has been popularising his presidential bid through meet-the-people tours, also postponed his activities.

"I urge other leaders to also be responsible and halt their public meetings and to lead by example by wearing masks and keeping distance," said Dr Mutua.

In addition to banning political rallies, social events like funerals, parties and weddings are also set to get tougher restrictions while night clubs, restaurants and bars could get new operating rules.

Sources told the Nation that bars could be made to operate on a take-away basis only or shut down altogether.

Travel across counties is unlikely to be banned again since the virus has spread to the whole country, while a decision on whether to keep the schools open will be made after a meeting between stakeholders and the President.

The mandatory wearing of masks in public places, social distancing and the rules governing public transport are expected to remain in place.

On Sunday, Mr Kenyatta seemed torn between locking down the economy again to slow the rate of transmission and maintaining the status quo.

"We are going through that very difficult time of saying; now, what do we do again? Do we close up? We shall be coming to that, not today, but soon," he said.

Several countries across the world are already witnessing second waves of the pandemic and are reinstating restrictions. It had been expected that, by re-opening the economy last month, Kenyans will continue to adhere to laid-down protocols by the Health ministry, something experts say is not happening.

"The political rallies need to be completely stopped until the Covid-19 pandemic is completely under control," Dr Githinji Gitahi, the Amref Health Africa Global Chief Executive Officer told the Nation.

Dr Gitahi, who sits in the National Covid-19 Task Force, said that, unlike bars and restaurants, which have "economic benefit", political rallies "should be stopped until the pandemic is under control. They (political rallies) are in the high risk quadrant."

But with the recently released Building Bridges Initiative (BBI) report having kicked the country into a heightened political mood and powered by 2022 presidential succession politics, President Kenyatta has been caught between a rock and a hard place.

Separately, the National Treasury has ruled out shutting down of the economy, even as health facilities continue to get overwhelmed.

Treasury CS Secretary Ukur Yatani yesterday warned that if the current measures fail to stop the spread of the disease, Kenyans will have a rough time and will suffer more economic implications.

The government, he said, has already lost about Sh172 billion through movement restrictions and tax reliefs.

"We propose that the government strikes a balance so that we reduce spread of the disease, but keep the economy afloat," the CS said.

He spoke during the signing of a Sh1.3 billion financing agreement between the government and TradeMark East Africa (TMEA) to support the construction of Busia Jumuiya Cross Border Market, Magongo Road in Mombasa, the Malaba One-Stop-Border Post and the road linking the Busia One Stop Border Post to Busia town.

"We are looking at both rail and other facilitative services and that is why we've had the special economic zones in Athi River, Mlolongo, and Naivasha. We are also looking at opening up Eldoret and Kisumu. The idea is to reduce as much traffic on the road as possible," he said.