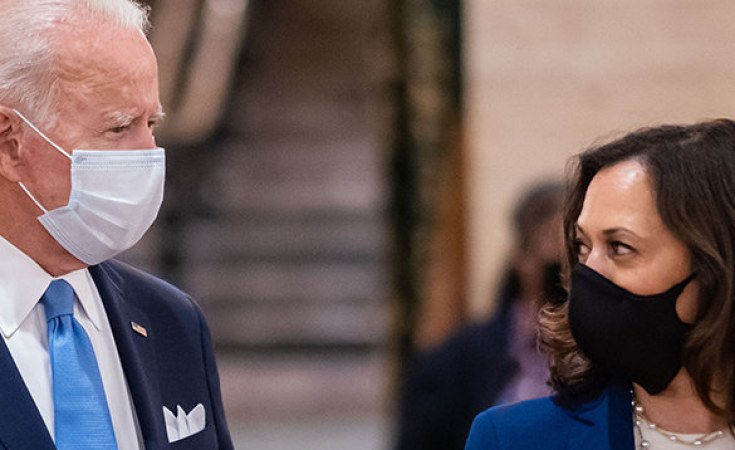 Democratic National Committee
Joe Biden and Kamala Harris, the president-elect and vice president-elect of the United States, taking SarsCo-V2 and Covid-19 seriously. Harris is the first person with African identity as part of her heritage to be voted to serve in that position.
Premium Times (Abuja)
By Adejumo Kabir

Born October 20, 1964 in Oakland, California, Ms Harris, an attorney and senator, is of African and South-ancestry.

In his congratulatory message to the newly elected president and vice-president of the United States of America, Joe Biden and Kamala Harris respectively, former President Olusegun Obasanjo said he has the convictions that Ms Haris has Nigerian blood.

Mr Obasanjo suggested the vice president-elect's lineage might be that of one of the Nigerian 'slaves' taken to the Caribbean from Africa during the colonial era.

"I felicitate with Vice President-Elect Kamala Harris as the first female Vice-President of the U.S. We in Africa are proud of her success. The first African-American President of the U.S., Barrack Obama, has Kenyan DNA in him and I am reasonably sure that the first African-American female Vice President-Elect of the U.S. will have some Nigerian DNA in her as most of those taken to the Caribbean from Africa went from Nigeria of today," the former president said.

Although Mr Obasanjo's claim is yet to be verified by anyone, historiians believe that between 1662 and 1807, the British moved over three million Africans across the Atlantic Ocean in what is now known as the Transatlantic Slave Trade.

They were taken to British-owned colonies in the Caribbean and used as slaves in plantations.

Born October 20, 1964 in Oakland, California, Ms Harris, an attorney and senator, is of African and South-ancestry.

This newspaper earlier reported that Mr Obasanjo described the success of Mr Biden and Ms Harris in the election as "victory of good over evil."

"I join millions in the United States of America and in the rest of the world who felicitate with you, President-Elect Joe Biden, for your victory"

"It is victory of good over evil and it is not victory for you and the people of America alone, but victory for most people of the world, majority of whom watch helplessly as the world that had been steadily and painstakingly built since the end of the Second World War was being pulled down."

The former president added, "Not that the world was perfect and equitable but it was reasonably predictable with some measure of rule of law and respect for international agreements and treaties.

"President-Elect Joe Biden must restore confidence in the role of America as the largest economy in the world which has a very significant responsibility for the peace, security, stability and progress of the world."

Biden's Win a Symbol of Hope for World Democracy - Raila