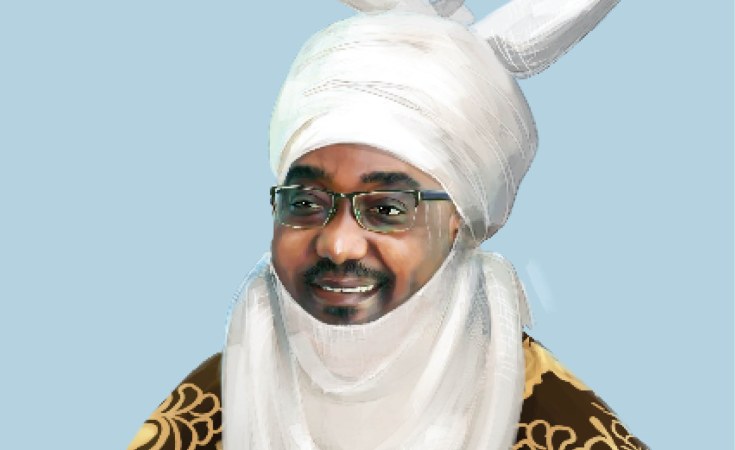 Zaria — In a well-attended ceremony, Ambassador Ahmad Nuhu Bamalli yesterday received the staff of office to mark his formal inauguration as the 19th Emir of Zazzau.

Ambassador Bamalli was appointed Emir on October 7, 2020 by Governor Nasir El-Rufai after the demise of the 18th Emir of Zazzau, Alhaji Shehu Idris on Sunday, September 20, 2020.

The ceremony which was attended by people from different parts of the country brought the ancient city of Zaria to a standstill.

As early as 7am, residents began trooping to the Muhammadu Aminu Square, also known as Zaria Polo Club, to witness the historic event.

A ceremony of that nature last took place in the ancient city 45 years ago when the late Emir Shehu Idris was inaugurated by the then military governor, Abba Kyari.

Therefore, many residents saw yesterday's event as a lifetime opportunity, as it was the first time for any resident below 50 years to witness such.

Daily Trust observed that most public and private schools allowed their students to go to the Polo ground to witness the ceremony.

Horse riders adorned in royal regalia took over the Kofar Doka-Sokoto Road, the route to the venue of the ceremony, which added colour to the event.

Display of horse riding skills by princes from different dynasties of the ancient city brought out the highs of the Zazzau tradition.

As tradition demands, Wazirin Zazzau, Alhaji Ibrahim Aminu, led the new Emir to the podium where he was to be crowned.

Before the new Emir mounted the podium, tradition required that Sarkin Dogarai (Chief of Defence Staff of the Emir) and Madaucin Cikin Gida (Aide in Charge of Home Affairs) first mounted the podium to ensure that there was no "cause for alarm."

Thereafter, the Emir was presented with the symbols of the Zazzau authority that include the Holy Qur'an, a flag of the Sheikh Uthman Bn Fodio and a Staff of Office, which was done by the Kaduna State governor, Nasir El-Rufai.

The Chief of Imam of Zazzau, Malam Dalhatu Qasim, later supervised the oath of office on the Emir, which marked an end to the formal ceremony.

However, the ceremony continued with the procession of horse riders, including the new Emir, back to the palace.

"Coming back 100 years after colonialists deposed my grandfather"

In his acceptance speech, the new Emir became emotional. He said 9th November, was not only special because he was crowned as the new Emir, but it marked exactly 100 years since the dethronement of this grandfather, late Emir Alu Dan Sidi.

He added: "I am happy today that I am a scion of Malam Yamusa, the first Emir of Zazzau under the Fulani rule, who received flag from my another grandfather Sheikh Uthman Dan Fodio."

As the new Emir continued delivering his speech, "tears of joy" kept interrupting the flow of the remark.

"I always emulate my late father," he said, "in respecting the structure of Emirship. This is an opportunity I got to continue to jealously protect the sanctity of this institution. By Allah's grace, we will continue from where our forefathers stopped.

"My accession to the exalted throne of Zazzau, whilst seen as controversial by some, is undoubtedly the will of Allah and I urge you all to come together so that united we can collectively rebuild our fragmented society, region and indeed the country at large.

"I would like to reiterate what I have said before since being proclaimed Emir. I reached out to all the contenders who put their names forward for the Emirship following the death of Sarkin Zazzau Alhaji Shehu Idris.

"I employ you all to join me in showing a united front in the work ahead. We have much to do in the service of our people and more experienced hands than few will make the work lighter and more impactful."

He added: "I reached out to you to work in the spirit of the brotherhood we share in Islam as well as that we share through the many blood connections between our clans.

"There are many societal issues that we wish to help our people surmount, this can only be effectively achieved through the concerted efforts of us all.

"I am using this opportunity to once again pray for the repose of the late Emir, His Highness, Alhaji Shehu Idris. I am also grateful to His Eminence, Alhaji Sa'ad Abubakar, Kaduna State government and all that contributed in one way or the other for making my appointment possible."

On his part, Governor Nasir El-Rufai said with the pedigree and experience of the new Emir in areas of diplomacy, law, banking and commerce, Ambassador Bamalli would offer inspired leadership.

El-Rufai added: "On behalf of the government and people of Kaduna State, I wish to congratulate Your Highness. We are proud of your unblemished career in the public and private sectors. We pray Allah to uphold and strengthen you, and reinforce you with all the wisdom, good health and resources for a successful reign.

"Your Highness ascends the throne in a much changed era to that of your illustrious predecessors as Emir. These are more modern times, with fresh opportunities and many old and new challenges.

"Ours is an incredibly young state, and so is Zazzau Emirate, with 89% of residents being younger than 35 years. We are grappling with expanding the opportunities for jobs, sound education and decent healthcare that can help channel this youthfulness as a positive resource."

He said the traditional institution is a suitable partner in assisting government to address the numerous security and other challenges facing the state and the country through provision of data on those residing on their domains, their source of livelihood and the facilities needed in different communities.

El-Rufai urged all and sundry to continue to uphold the attributes that make the emirate and its people unique, urging the new Emir to promote the traits of justice, enterprise and integrity like his predecessors.

While eulogizing the late Emir Shehu Idris, El-Rufai described him as "a just and fair ruler, a peacemaker par excellence, an outstanding administrator and a kind hearted leader and father."

Perhaps, trying to explain the circumstances that led to the appointment of the new Emir, El-Rufai said, "it is God that gives power to whom He wishes at a time and circumstances best known to Him.

"As Governor of Kaduna State, it is God's Will that I am privileged to be the first elected public servant to appoint an Emir of Zazzau in an independent, democratic setting.

"This occasion of handing over the Staff of Office to the 19th Fulani Emir of Zazzau is taking place exactly 100 years since the colonial Governor of Northern Region, Herbert Symonds Goldsmith, unjustly deposed your grandfather, Emir Aliyu Dan-Sidi of blessed memory.

"The vacancy of the stool of Zazzau Emirate therefore gave the Kaduna State Government an opportunity not only to redress a colonial injustice, but to return to the enduring principles that guided the appointment of Emirs under the Sokoto Caliphate. Shehu Usman Dan Fodio in his seminal work 'Bayan Wujub Al-Hijra' was crystal clear that there are nine qualities of Islamic leadership - wisdom, learning, clemency, generosity, kindness, righteousness, patience, gratitude, and leniency which entails avoidance of harshness."

In what appeared to be a warning to those who are still contesting the appointment of the new Emir, El-Rufai, promised them "decisive action."

He said: "There are other principles of dynastic succession, avoidance of unilinear absolutism and required experience in administration of persons and territory that were discarded by the colonial and military regimes that the Kaduna State Government felt duty-bound to restore, observe and comply with. It is on the basis of due regards to these customs, rules and enabling laws that Almighty Allah chose Your Highness to be our Emir, and imposed on me the constitutional duty to appoint you.

"I also appeal to the title holders, district heads, members of the Emirate Council, the good people of Zazzau Emirate, and indeed all the citizens of Kaduna State to rally around our new Emir by extending to him their full support and cooperation in the same way they extended support to his predecessors to enable speedy development of the Emirate and the state in general."

He added: "This administration expects the loyalty of all persons to our Emirs and Chiefs and will take firm and decisive action against any person that attempts to undermine, in any shape or form, the non-partisan and noble status of our traditional institution, particularly Zazzau Emirate."

President Muhammadu Buhari was represented at the occasion by the Minister of Environment, Muhammad Bello.

Buhari urged the new Emir to use his "exalted" position to contribute his quota in addressing the security challenges bedeviling the country. He advised the Emir to continue to uphold the traditional values of the emirate.

Alhaji Aminu argued that the appointment violates Zazzau Native and Custom Law under which the emirate evolved.

However, the court on Friday ruled that it could not stop the coronation of the new Emir, as that would amount to creating vacuum in the leadership structure of the emirate.

The presiding judge, Justice Kabir Dabo, rather said he would give the case instituted by the Iyan Zazzau accelerated hearing and adjourned to November 18, 2020.

Nigeria Is Third Most Terrorised Country In The World - Report
Labour