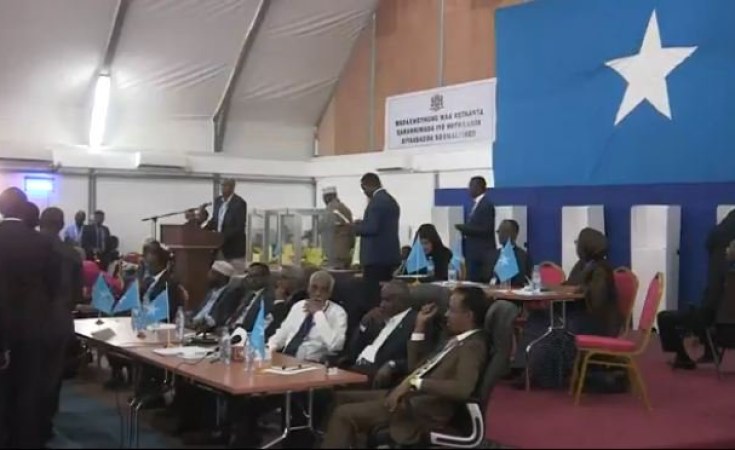 Abdirahman Abdishakur may have been around during Somalia's rebirth and political scene for the last two decades but the Somali constitutional expert, 52, still yearns for the country's top prize: the presidency.

As the country prepares to hold its presidential elections in February, the Wadajir Party leader hopes to make the cut.

A former humanitarian worker, he joined politics 15 years ago, helping to negotiate a peace agreement in Djibouti for the Alliance for the Re-Liberation of Somalia, the successor to the Union of Islamic Courts. Later, he served in the government of Sheikh Sharif Ahmed as Minister for Planning.

"My position is always clear," he told the Nation last week.

"I have been consistent for years."

In 2017, he was among the 20 presidential contenders in a race won by Mohamed Farmaajo. Now they could meet again. The electoral calendar released last month, after a deal between the Federal government and the federal member states, has not yet listed the number of candidates who might contest. As is usual with Somalia elections, both veterans and fringe competitors could show up.

Abdishakur, however, says he wants to be President to right wrongs committed by the incumbent, including curtailing the federal system.

"We have different approaches on how Somalia should function. He thinks that a centralised, authoritarian regime is a strong one. I believe a federal system is better," Abdishakur told the Nation.

"Our priority is to build consensus among Somalis. He is the opposite."

Most politicians in Somalia often agree the country faces a serious problem with Al-Shabaab, who have now infiltrated most of the country's key institutions, including revenue collection departments. They are also said to sponsor politicians to key positions in what could indicate formalising extremism.

Abdishakur says he can help build trust between stakeholders, something he says has made it difficult for the country to establish statehood.

"Security is paramount to any problem in Somalia. You need to negotiate the composition of the army. The problem is that Somalia has politicised the military, that is why soldiers are used to intimidate the opposition," he argued.

In December 2017, his Wadajir party offices were raided by unknown gunmen, who killed five guards and injured several people including himself. He has argued that the attackers were sponsored by the federal government to intimidate his vocal opposition. There has been no clarity on the gunmen.

Abdishakur has also been a victim of extremism. Last year, convicted cleric Hassan Dahir Aweys issued a 'fatwa', an Islamic pronouncement, on him for calling for improved gender equality. The cleric was able to prepare a video from his jail cells.

"We don't want our security politicised. Farmaajo has used it against opponents. We need to come back to the National Security Council (composed of federal government and federal member states) ... to have a Somali character."

Farmaajo's government has argued it eliminated ghost workers in the military and put the country on a path to debt forgiveness, allowing Mogadishu to borrow again from international lenders.

The problem? Abdishakur argues there are missing links, especially in the justice system and financial sector, where he argues the government has ignored pleas for reforms, allowing Al-Shabaab to fill the void.

"Our courts are corrupted," he said referring to the annual corruption perception index by Transparency International. It showed Somalia was the most corrupt country in Africa, a fact disputed by the federal government.

"The Somali President needs to concede his power for the sake of reform. There are no checks to his power; The courts, Prime Minister and Parliament are subject to his control, not by the Constitution but by political realities on the ground.

"We are facing a huge and complex problem."

Somalia elections are happening even as African Union forces prepare to leave Somalia from March. There has been debate on whether the Somalia National Army will be strong enough to take over.

Abdishakur thinks coordinated training of the SNA and a gradual transfer of responsibilities to SNA, after first building its capacity to respond to threats, should be a long term goal. The immediate goal, he argued, would be to address why Al-Shabaab still appeals to some people.

"I want to address the cause of radicalisation. A citizen data bank is important but we will also need to address marginalisation, poverty and political consensus.

In Somalia, however, the problem mostly begins with clan-based politics.

Born in Galmudug, Abdishakur comes from the Hawiye clan, Habalgidir sub-clan. It occupied the presidency during the transitional period when Abdiqasim Salad Hassan was selected to lead the Transitional National Government from 2000 to 2004.

Since then, the sub-clan hasn't won the seat but incumbent Prime Minister Hussein Roble is a member.

Ahead of the elections for MPs next month, who will in turn elect the President in February, leaders agreed that voting delegates be nominated by clan elders in conjunction with electoral committees.

There has been a problem already as critics accuse the federal government of placing cronies in committees.

Somalia, most politicians admit, may not free itself of negative clan politics for now but it is something leaders may want to tackle as soon as possible.

For Somalia though, the relationship with neighbours could be crucial. Under Farmaajo's tenure, the country has had lukewarm relations with Kenya, especially after he insisted the maritime boundary case at the International Court of Justice has to go on.

The case, however, may be traced to Abdishakur's time as Planning minister. He signed an MoU that provided for the boundary disputed to be resolved via the UN. However, the Somalia transitional Parliament rejected the document, allowing Mogadishu to sue at the ICJ.

Abdishakur agrees that the court should be the proper legal arbiter at the moment but says relations with neighbours should be built through dialogue, not grandstanding or isolation.