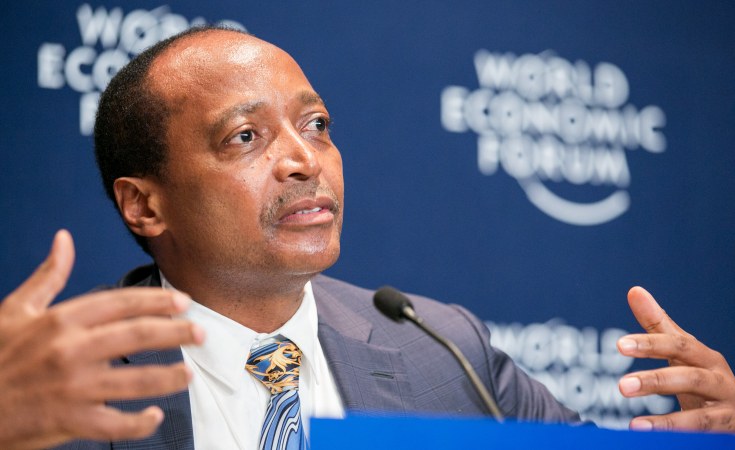 South African billionaire businessman, Patrice Motsepe, dropped a bombshell yesterday which shook the continent's football landscape when he announced he will run for the CAF presidency in March next year.

The 58-year-old mining magnate, named by Forbes as the 10th richest man in Africa, with a net worth of US$2.4 billion, is the president of 2016 African champion club, Mamelodi Sundowns, a position he will have to vacate if he wins the elections.

Motsepe is believed to be the choice of the FIFA establishment to bring back sanity into African football after the game was ravaged by poor governance, including alleged misappropriation of funds.

The world football governing body were forced to intervene, including seconding their general secretary, Fatma Samoura, to work at the CAF headquarters and restore order.

Should Motsepe win, he will become the second CAF president from Southern Africa, after incumbent Ahmad Ahmad was swept to power by a rebellion whose roots were in this region three years ago.

However, Ahmad has fallen out with many of those who propelled him to power, amid a series of scandals, including his detention by French police in July last year.

An audit of CAF unearthed a series of serious financial irregularities with questions raised about millions of dollars of cash payments which were distributed to executives and national associations without the expected accompanying records.

The by PwC report found "possible abuse of power" and reported "potential fraudulent adjustments" in accounting records which the auditors said were "unreliable and not trustworthy".

PwC found US$4.6 million from 14 payments had "no or insufficient supporting documentation to determine the beneficiary, purpose, and benefit for CAF" while a further US$3.6 million payment was "considered unusual or deemed higher risk".

"Based upon the procedures performed, and documents reviewed, several red flags, potential elements of mismanagement and possible abuse of power were found in key areas of finance and operations of CAF," said PwC.

"Given the serious nature of certain findings and red flags identified from the preliminary due-diligence, we cannot rule out the possibility of potential irregularities."

Ahmad was said to have authorised that CAF pay about US$100,000 for 18 people, including himself, to travel on a Umrah pilgrimage to Mecca and Medina in Saudi Arabia.

"CAF stated that the cost of travelling of 18 people between their home countries to Egypt was booked as 'official expense' towards organising a meeting at Egypt and the cost of traveling between Egypt and Saudi Arabia was taken by CAF's president personally," the report said.

"However, CAF could not provide any documents to support that an official meeting was organised in Egypt during this time. It is to be noted that the presumed costs of travel between Egypt and Saudi Arabia are in the range of US$20 000-US$30 000 higher than the actual reimbursement made by CAF's president."

Ahmad, who recently claimed he had the support of 46 African nations to have a go for another term as CAF boss, now finds himself facing the possibility of being barred by FIFA from doing so,after violating some of the world football governing body's ethics.

COSAFA, under the presidency of their president Philip Chiyangwa, had initially led the wave of support for Ahmad to go for a second term, but things have changed dramatically since reports emerged that the CAF boss now faces FIFA sanctions.

Already, South Africa, the biggest, and most powerful member of COSAFA, have thrown their weight behind Motsepe with the football associations in Zimbabwe and Botswana also backing the billionaire's candidature.

Their colleagues in Nigeria and Sierra Leone have also followed suit and, according to sources, by Thursday, more than a quarter of the CAF members would have declared their support for Motsepe.

Isha Johansen, Sierra Leone FA president, who is also a member of the CAF executive council, said Motsepe had the passion to lead the game to a higher level.

"Change has become an all too familiar slogan and mantra in politics, be it national or football, but the question is how many can attest to having succeeded in bringing about real genuine change for all and not for some?" she asked yesterday.

"The key to successful governance starts from the point where the right person, or persons, are put in the right positions for the right reasons.

"African football and the African continent needs to be on the global platform for the right reasons.

"Patrice Motsepe, like myself, is a humanitarian and a football club owner. His passion for football and very successful business ventures have been driven by humanity and a genuine need to change the narrative of the African continent.

"Patrice, in my opinion, has the ability to see beyond 90 minutes on a pitch."

With SAFA backing Motsepe, it also means that Ahmad has lost the support of one of his immediate lieutenants, Danny Jordaan, the CAF third vice-president.

Nominations will close on Thursday.

"The SAFA National Executive Committee approved a round-robin resolution by an overwhelming majority to nominate Dr Patrice Motsepe for the position of president of CAF," SAFA announced.

"His football and business success is well recorded in our continent and in the world.

"We need to build a partnership between CAF and business leaders on the continent. Building relationships and partnerships is a fundamental first to realise greater financial support for football

"His participation in the giving pledge with global billionaires, highlights his commitment to contribute to the improvement and upliftment of the living conditions of the poor, unemployed and marginalised in Africa and globally.

"We are convinced that his business acumen, his strict observance of governance, his legal training, his global business network and his commitment and love for African and world football makes him a revolutionary choice for the leadership of African Football.

Already, Cote d'Ivoire's Jacques Anouma has announced he will run for the CAF presidency.

In Race for CAF Presidency, Pinnick a Formidable Figure