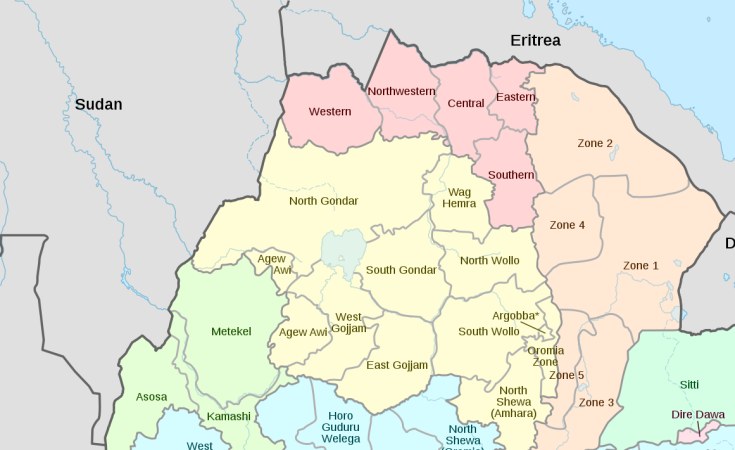 NordNordWest/Wikimedia Commons
Map of the regions of Ethiopia, showing the boundary between the Tigray region (in dark pink) and neighbouring countries.
CAJ News Agency (Johannesburg)
By Adane Bikila

Addis Ababa, Ethiopia — Sudan is on high alert for refugees from neighbouring Ethiopia where the government has declared a state of emergency in the northernmost Tigray region.

The United Nations High Commissioner for Refugees (UNHCR) confirmed the arrival in Sudan of 30 Somali asylum-seekers that had sought refuge in Ethiopia but had now fled because of the military operations.

"We are working closely with the Sudanese Commissioner for Refugees and partners to stay ahead of the situation."

Bisschop confirmed the UNHCR in Djibouti, Eritrea, Ethiopia and Sudan were also coordinating a regional response to the situation.

On Friday, the Governor of Kassala in eastern Sudan announced the closure of borders between the state and Ethiopia until further notice, because of the security situation.

The state will create a committee to assess the situation and administrate the potential arrivals of civilian refugees through humanitarian corridors.

UNHCR's teams in Girba and Kassala are working with the Sudanese Commissioner for Refugees, local authorities and partners to gather additional information on any movement into Sudan.

As of September 30, UNHCR has recorded 3 159 new arrivals of refugees in East Sudan, with 28 new arrivals from Ethiopia in 2020.

One of nine regions in Ethiopia, Tigray entered into conflict with the Ethiopian federal government last week.

Next Story
Tagged:
Copyright © 2020 CAJ News Agency. All rights reserved. Distributed by AllAfrica Global Media (allAfrica.com). To contact the copyright holder directly for corrections — or for permission to republish or make other authorized use of this material, click here.