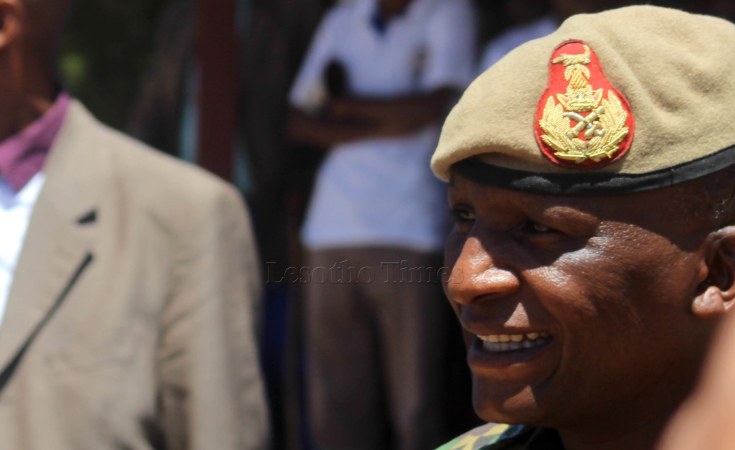 PROSECUTORS of the high-profile trials involving politicians, serving and former members of the security agencies have accused former army commander Lieutenant General (Lt-Gen) Tlali Kamoli and others of frustrating their trials by lunching fresh court applications in cases that had already been dismissed by the courts.

The prosecutors also disputed Lt-Gen Kamoli's claims that he suffered from a chronic illness and therefore should be released from the Maseru Central Correctional Institution where he has been detained since 2017 while awaiting trial for various crimes including treason and the murder of army commander, Lt-Gen Maaparankoe Mahao.

Shortly after being remanded in custody in 2017, Lt-Gen Kamoli was denied bail by the now retired High Court Judge Teboho Moiloa on the grounds that he had failed to prove there were exceptional circumstances which justified his release.

He has since filed other applications for his release or the stay of his trials on various grounds. The latest application was filed last month in the Constitutional Court.

All in all, there are 28 applicants including Lt-Gen Kamoli who have petitioned the Constitutional Court to have their trials permanently stopped. In the application, Lt-Gen Kamoli repeats the old arguments that he is chronically ill and therefore should be granted bail.

He however, does not disclose the nature of his alleged illness but alleges that his continued detention under "inhuman" conditions is further compromising his health.

"I have been diagnosed with a chronic disease and the living conditions at the Maseru Central Correctional Institution impact negatively on my health. The conditions are not the acceptable standards for good health. I have also lost all hope that I will receive a fair trial," Lt-Gen Kamoli states.

However, in her answering affidavit, Crown Counsel, Advocate 'Naki Nku, argues that Lt-Gen Kamoli's allegations should be dismissed because as in previous cases, he fails to disclose the nature of his illness. Adv Nku prosecutes several high-profile cases including Lt-Gen Kamoli and others' trial for the June 2015 murder of Lt-Gen Mahao and their attempted murder case in connection with the January 2014 simultaneous bombings of former First Lady 'Maesaiah Thabane and then police commissioner Khothatso Tšooana's homes.

"The deponent is alleging that he is sick. He made the same statement when he applied for bail and it was refused by Justice Moiloa because he had not shown exceptional circumstances," Adv Nku says in her court papers.

"He is not telling this court the name of chronic disease he had been diagnosed with just like he did in his refused bail petition. He leaves it to this court to winkle out the exact meaning of this loaded statement that he is sick from obscurity."

She said Lt-Gen Kamoli and others had also resuscitated their bid to get rid of Zimbabwean Judge Charles Hungwe even though a similar application had been dismissed by the High Court and the Court of Appeal "and this renders it unnecessary to consider the allegations framed in that fashion again".

She also argued that Lt-Gen Kamoli's co-accused's habit of frequently changing their lawyers had led to the frequent delays in trying their cases. Hence, they had no justification for seeking to have their trials permanently stopped on the grounds that the courts had taken too long to try them, she argued.

"The co-accused of Lt-Gen Kamoli keep on changing their lawyers and this results in postponements of their case to allow new lawyers fit in. It is unfortunate that the applicants are applying for a drastic remedy of permanent stay of prosecution after they had caused the postponements of their trials by their own conduct," Adv Nku argued.

"In the manner that he continued to address the court, I was afraid he was bordering on contempt and he had an irresistible impulse to proceed without interruption or pause until he had delivered himself of all he had to say. It was in that context that the court informed him that his right to legal representation was not absolute more so when it clearly appeared that the accused was abusing that right," said Adv Masiphole.

Among others, Adv Masiphole is the prosecutor in the case in which Captain Nyakane and others are accused of murdering three civilians in Mafeteng in 2012.

Adv Masiphole said in another instance, Captain Nyakane displayed his "unsavoury conduct" when he applied for the recusal of Botswana Judge Onkemetse Tshosa on 9 September 2020.

He said to his credit, Justice Tshosa "remained professional" despite the apparent provocation by Captain Nyakane during the recusal application.