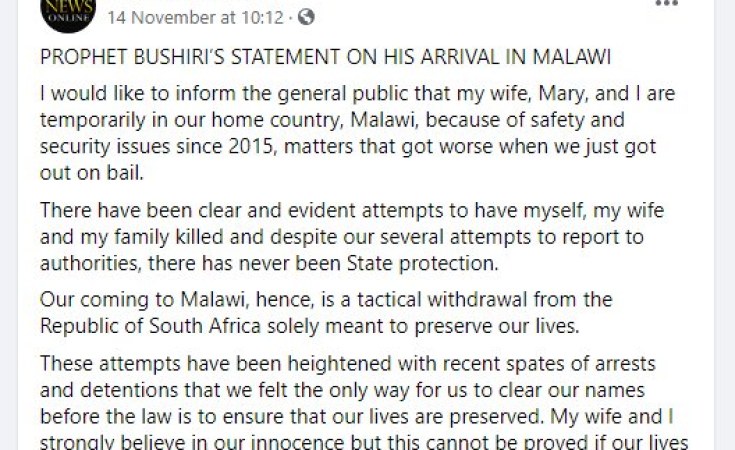 South Africa government has put to an end to the rumour that Prophet Shephered Bushiri fled on Malawi's presidential jet with President Lazarus Chakwera, saying they verified that the controversial Christian preacher used other means to escape and they have started the official extradition process in order for the Malawian prophet, and his wife Mary, stand trial in the 'rainbow nation' .

Earlier this month Bushiri and his wife were released on bail after being charged with fraud and money laundering in October in a multimillion-dollar case but got bail in November on condition that they would confine themselves to South Africa's Gauteng province.

On Sunday afternoon, South Africa government spokesperson Phumla Williams, said in a statement seen by Nyasa Times that the extradition from Malawi will be requested in terms of the Southern African Development Community (SADC) Protocol on Extradition "and other legal instruments, to which Malawi is a signatory".

This, the statement said, is to ensure that Bushiri and his wife who are branded " fugitives" should face justice.

It adds: "While this process is underway, law-enforcement agencies will continue investigations into this matter."

Bushiri, leader of his church - the Enlightened Christian Gathering (ECG) - is known for his "miracles" and wildly extravagant lifestyle.

'Major 1' as Bushiri is widely known, said he had fled to Malawi as he feared for his life and he accused the South African authorities of not offering protection.

"Our coming to Malawi, hence, is a tactical withdrawal from the Republic of South Africa solely meant to preserve our lives," said Bushiri. "We have to be alive to testify."

Meanwhile, the South African government has parried away speculation that the Malawian President may have been involved in smuggling Bushiri since news emerged that his flight home had been delayed by several hours.

The Malawian leader was on a working visit to South Africa and met with President Cyril Ramaphosa in Tshwane on Friday.

Besides the Malawian government vehemently denying this on Saturday, spokesperson for South Africa government Williams also put an end to the rumour.

"Government is able to confirm that (the) fugitives ... did not leave South Africa aboard a flight on which President Lazarus Chakwera and his delegation travelled.

Williams added that "President Chakwera and his delegation departed from Waterkloof Air Force Base in Pretoria and stopped over at OR Tambo International Airport to collect an additional number of officials who had travelled to South Africa earlier to prepare for the working visit.

"Department of Home Affairs immigration officials verified the identities of all passengers and Mr and Ms Bushiri were not on the flight.

"When travellers are processed for departure, they are required to present themselves to an immigration officer who, among other checks, verifies that the passport belongs to the traveller," she said.

Bushiri is adamant he's not running away from his trial in South Africa.