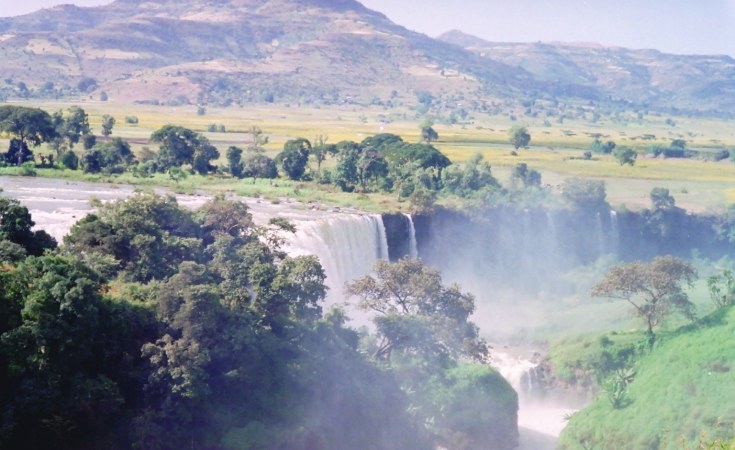 The Nile is the longest river in the world, but also the source of water for two great civilisations. Egypt is the epicentre of the oldest civilisation, with a current population of 98 million people. It is dependent on the Nile for 97% of all water on exogenous flows - water originating outside its territorial borders - making it extremely vulnerable to upstream activities.

Ethiopia is home to the Orthodox Church in Africa, with a civilisation dating back at least 2,000 years, and a current population of 105 million. The Blue Nile is the largest contributor of water to the lower Nile on which Egypt is dependent, but its source is fully within the geographic limits of Ethiopia.

Historically, Egypt has long been opposed to any development on the Nile upstream that could curtail the amount of water it receives. At the heart of the current issue are two massive dams, one in a desert where stored water is lost to evaporation and seepage, the other in the highlands where geology and topography provide storage with lower losses. In terms of the energy aspects of these two dams, both provide massive hydropower potential, although the Great Renaissance Dam can produce three times more energy than the Aswan High Dam can, in a more reliable manner.

In essence then, the conflict is about efficiencies of water storage and use versus national security fears arising from the inherent vulnerability associated with exogenous water.

At the heart of the dispute is the strategic importance of water, energy and food security. This is overlain by four critical issues - national security, energy needed for industrialisation, management of evaporative losses, and tensions over the optimisation of system yield at national versus regional levels of control. To understand the dispute, it's necessary to appreciate the way that each of these issues play out in the rhetoric and posturing of Egypt and Ethiopia as the two major actors.

In water constrained economies, all economic development is curtailed. This ultimately impacts on social stability, so it becomes a national security issue. This is certainly the case for Egypt, where national security concerns were triggered when French and British colonial rivalry saw an expeditionary force try to gain control of the headwaters of the Nile in 1898. This fear was made more apparent when the first Arab-Israeli War of 1948 saw the Egyptian Revolutionary Command Council, under Gamal Nasser, call for the "High Dam Covenant". The essence of this covenant is for Egypt to always have direct control of the Nile, most notably by storing more than double the annual flow of the river in the Aswan High Dam. So powerful was this covenant that any person questioning the impact of the dam was deemed to be unpatriotic and ostracised. The heart of the national security issue is strategic storage of water, which must be retained in Egyptian hands, irrespective of the implication. Stated differently, Egypt has chosen to achieve national security by retaining direct control of water, energy and food production within its sovereign sphere.

Almost all countries choose to modernise their economies in response to the growing population. This is certainly the case for both Egypt and Ethiopia, with a combined population of 203 million. Early industrialisation in Egypt was opposed by Britain, who favoured cotton production to supply their own textile industry. This meant a trade-off when the Aswan High Dam was built, because water was needed for agriculture, which meant that releases were timed to suit agricultural production. This is at odds with energy production because the depth of the water determines the amount of energy that can be generated.

So, while Egypt has an installed capacity of 2,100MW of power, this is only achievable if water is not released for crop production. This is not the case for Ethiopia, which has 6,450MW of installed capacity that is not constrained by the intermittent need to release water for irrigation. This brings into focus the strategic issue of water, energy and food security, by opening up the potential benefit of optimising the system at a level above that of the independent sovereign state.

Stated differently, the energy needed to create an industrial economy is not compatible with the water storage needs for purely agricultural production, so Egypt has a stark choice. If it wishes to retain sovereign control over water and food security, then it cannot generate enough energy to diversify its economy. Ethiopia, on the other hand, can generate energy for export to other countries in the region, thereby diversifying its economy and creating food security through importation rather than domestic production.

There are two universal and inescapable realities for all dams in arid climates. The first is that the larger the surface area of the dam, the greater the losses of water to evaporation. The second is that the surface area of the dam, expressed as a function of total volume stored, means that a deep dam built in a steep-sided valley at elevation, will always have lower evaporative losses when compared to a shallower dam built across a wider floodplain. This is a critical issue, because the more a river is dammed in a desert, the greater the loss to evaporation, and the lower the yield of the system for economic activity.

Which brings us to the essence of the dispute between Egypt and Ethiopia. It is not a dispute over the environmental impact of hydro-powered energy, because baseload energy requires a steady flow of water through the turbines, with limited fluctuation to account for peak demand. Rather it is a dispute arising from the clash between water, energy and food security at national level versus regional level. Egypt can still get its water from the Blue Nile, once the Grand Renaissance Dam has been filled, so the issue is the rate of filling, and not the energy production. More importantly, Egypt will be guaranteed a baseflow down the Blue Nile, which currently contributes about 2/3 of the total flow, simply because Ethiopia will be unable to close the sluices once the energy is flowing into a regional grid. The argument that Ethiopia can shut down the flow is illogical, because that would undermine the very objective of the Grand Renaissance Dam, which is to generate energy for export to the region.

To reframe the debate, the obstacle to be overcome is the assurance that Egypt would receive greater benefits by relinquishing control over strategic storage to a location upstream in the basin. To find an answer to this national security problem, we need look to the Lesotho Highlands Water Scheme. Built during apartheid, South African national security elites were fearful that Lesotho could shut down the supply of water to the Witwatersrand goldfields and the cities of Johannesburg and Pretoria. This was overcome by clever engineering and design, because the Muela hydropower plant was located downstream of the Katse Dam, but upstream of the point of delivery of water into South Africa at Liebenbergsvlei. The whole idea was that if Lesotho chose to shut down the delivery of water, then their own energy supply would fail. This was a form of mutually assured destruction, a security concept central to nuclear deterrence.

The dispute between Egypt and Ethiopia over the Grand Renaissance Dam offers a unique opportunity to reframe the water, energy and food security dilemma facing governments with growing populations in an arid environment. While it is desirable to create security in all three realms by monopolising control at national level, the harsh reality is that this is simply not possible. Countries are locked into relationships with other sovereign states by virtue of their shared dependence on a river. The Nile locks in 12 countries, some the poorest in Africa, and the flow of the river is such that by sharing water in any way that meets the needs of the downstream riparian's - Egypt and Sudan - then food and energy security cannot also be guaranteed for other states.

Water sharing is a recipe for long-term conflict, because there is not enough in the river, and the zero-sum nature of the allocation implies a growing conflict potential. A viable alternative has to be considered, and this is best framed in a benefit-sharing framework. Realistically, water can be used more than once in each system, so a plus-sum outcome is possible. The generation of electricity in the headwaters does not reduce the stock of water available for downstream use.

This implies the need to cooperate at multilateral level, to negotiate international agreements that are legally enforceable, and even guaranteed by external agencies as required. Such an agreement would determine the rate at which the Ethiopian dam can be filled, as well as the minimum and maximum discharges needed to satisfy the legitimate security concerns that Egypt has. In effect then, water, energy and food security would be shifted from national level to a regional level, managed within the context of a River Basin Authority representing all riparian states. Water and food security for Egypt would be offset against the creation of energy security in Ethiopia, acting as the powerhouse for regional integration and the sustained creation of an emerging industrial economy that benefits all riparian states.

ANTHONY TURTON is a professor at the Centre for Environmental Management, University of Free State. His work on water as a risk and opportunity grew out of his role as a senior intelligence officer in the South African Secret Service (SASS). He serves on the editorial board of various international publications, including Water Policy, the official journal of the World Water Council. He has previously served as executive director, and later vice president of the International Water Resource Association (IWRA), as well as a deputy governor of the WWC. His current work focuses on the water crisis in South Africa. He has been awarded the Royal Bank of Canada visiting scholarship to the University of Waterloo in Ontario, Canada for 2017/18.