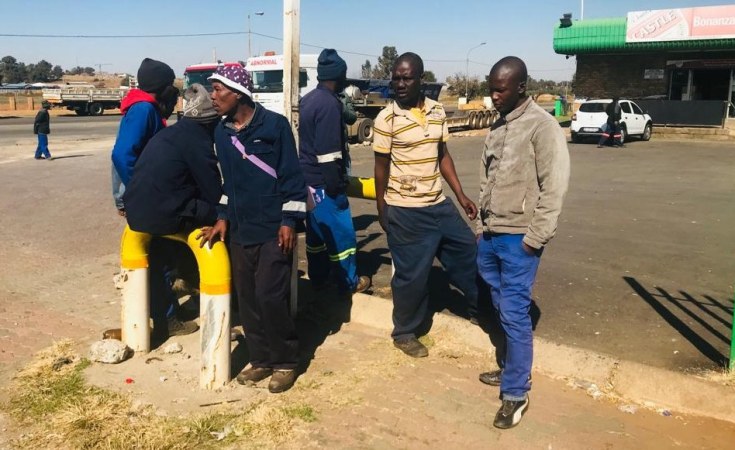 Kimberly Mutandiro/GroundUp
Immigrants wait for work at the side of the road in Brakpan (file photo).
GroundUp (Cape Town)
By Catherine Kruyer

The Gauteng Township Economic Development Draft Bill, published by the Gauteng Provincial Legislature on 30 September, seeks to exclude foreign nationals who are not entitled to permanent residence status in South Africa from owning and operating businesses in the Gauteng township economy.

The stated purpose of the Bill is to promote and develop the township economy, long overlooked in both policy and legislative initiatives, despite providing many people in South Africa with their livelihoods. A thriving township economy is essential for the realisation of the rights to dignity and equality, and socio-economic rights.

However, there are major concerns about the constitutionality of the Bill, as presently formulated. Section 7 provides that certain business activities, in a designated township, are "exclusively and solely reserved for ownership and operation" by citizens or persons who have permanent residency status.

The Gauteng Legislature is constitutionally empowered to take steps designed to advance certain categories of persons to promote the achievement of equality.

However, the Legislature may not run roughshod over the constitutional rights of foreign nationals in its attempt to achieve equality.

The Constitutional Court has made it clear that foreign nationals in South Africa are entitled to all the fundamental rights enshrined in the Bill of Rights except those expressly limited to citizens. To exclude those who are lawfully in South Africa, but who do not have permanent residency status, from participating in the Gauteng township economy unjustifiably infringes upon their rights to dignity and equality.

The right to equality

Section 7 constitutes unfair discrimination in violation of the right to equality. It will affect refugees and asylum seekers, who have the right to seek employment (including self-employment) in terms of the Refugees Act 130 of 1998, and people who have been granted the requisite visas to engage in business activities in South Africa in terms of the Immigration Act 13 of 2002. It will strip those who engage in business activities in the Gauteng township economy of their livelihoods.

The discrimination in the Bill is immediately distinguishable from that under consideration in Union of Refugee Women - a case in which the Constitutional Court held that the State's exclusion of refugees from work in the private security industry did not constitute unfair discrimination. That case must be understood in light of the entire statutory scheme that was in issue. In this regard, the Court explained:

"The scheme is for a limited fixed period; it is not a blanket ban on employment in general but is narrowly tailored to the purpose of screening entrants to the security industry; it is flexible and has the capacity to let in any foreigner when it is appropriate and to avoid hardship against any foreigner."

In contrast, section 7 of the Gauteng Township Economic Development Draft Bill operates as a blanket ban and makes no provision for flexibility or attempt to avoid hardship. It is inconsistent with the constitutional right to equality.

The right to dignity

In Watchenuka, the Supreme Court of Appeal held that depriving asylum seekers of the right to work through a general prohibition would threaten to degrade those asylum seekers who have no other means for support. In the Court's words: "[A] person who exercises his or her right to apply for asylum, but who is destitute, will have no alternative but to turn to crime, or to begging, or to foraging."

The principle recognised in Watchenuka was extended to self-employment by the Supreme Court of Appeal in Somali Association - a case in which the Court held that the constitutional right to dignity entitles refugees and asylum seekers to engage in trade if they have no other means of support. The Court appositely cautioned that the authorities must "guard against unwittingly fuelling xenophobia."

Catherine Kruyer is an advocate and a legal researcher at the Helen Suzman Foundation.

Views expressed are not necessarily those of GroundUp.

The period for public comment on the Bill is still open. Comments may be emailed to info@mjaji.co.za and Ms Reeva Welman at GDEDLegal.Services@gauteng.gov.za until Monday, 30 November 2020.