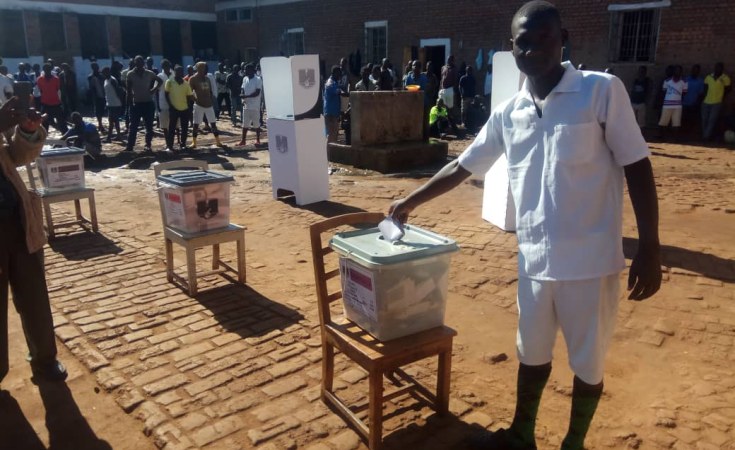 Americans love to promote the myth that they have the corner on government by and for the people, but the latest brouhaha at the polls suggests otherwise.

Despite the cheers ringing around the world, the democracy that insists it is better than the rest has just reminded us how deeply flawed it is.

After it became clear that Joe Biden had won the United States election, he and Democratic Party leaders told the world that American democracy had again triumphed. If Biden does take office - which is not certain since Donald Trump may find a way to deny him - it is only a matter of time before the American government, its academics and its democracy-promotion industry will again be telling the rest of us whether we are democratic enough.

This despite the fact that the US's own election looked uncannily like one of those in Africa, Asia or Latin America, which the US democracy establishment loves to judge.

We know what US democracy promoters would say about an election with these features: an incumbent refuses to go despite having lost and claims fraud without evidence; there are fears that judges appointed by the incumbent will overturn the result; shops are boarded up ahead of the poll for fears of violence; gun-toting zealots try to storm election centres to stop the counting of votes for the opposition candidate; unrest hits the streets as supporters and opponents of the incumbent claim their candidate has won. No wonder election monitors used to watching elections elsewhere are now monitoring the US poll.

The parallels with caricature "third-world" elections were not lost on some, including Financial Times Southern Africa correspondent Joseph Cotterill, who suggested on Twitter that, if the US election were happening here, Western diplomats might be saying, "Yeah, that was good enough, don't rock the boat" and would back the incumbent. In the midst of all this, the US embassy in Côte d'Ivoire, with a straight face, issued a statement on that country's disputed elections, urging all parties to find inclusive solutions and resolve election grievances peacefully (in fairness, it did not have the gall to advise anyone to accept the results).

Telling others to do what the US says, not what it does, is not new.

Anyone interested in democracy in the Global South is used to Americans, joined at times by Western Europeans, who "promote democracy" around the world. That really means judging how close others are to an idealised model of democracy in the West. An entire area of study was developed to give this missionary work academic respectability - the "democratic consolidation" framework, which claimed to work out whether a new democracy was "really democratic", which means how closely they were said to resemble North American or Western European democracies.

If we didn't measure up, we would be told what we needed to do to win approval. This view is often embraced by academics and commentators in the Global South: it is common to hear African analysts discussing how our democracies can become "real" like those in the West.

But the "perfect" Western democracies are not at all perfect. Britain, still admired by many in Africa and Asia, has an unelected house of traditional leaders and has allowed police to detain suspected "terrorists" without trial. But few are as imperfect as the United States.

Two core principles of democracy are that all adults are allowed to vote and that each vote counts as much as all the others. Neither applies in the US. "Voter suppression", finding ways to deny the vote to people who are likely to vote for the other party, is common. At the moment, a favoured trick is making sure that voting places are plentiful in areas where people vote the "right" way and very hard to find in places where they don't.

Nor do all votes count equally. In presidential elections, the candidate with the most votes does not necessarily win because the election is decided not on how many votes candidates get but by how many states they win. Biden won the popular vote handily but still had to battle to win the election. In the two national law-making bodies, the Senate and House of Representatives, votes also do not count equally. In the Senate, the millions of voters who live in California, Texas or New York elect two Senators each, while those in tiny states such as Wyoming and Rhode Island also elect two. In the House, boundaries are often drawn to favour the party that controls the state - the term "gerrymandering" was invented in the US to describe drawing boundaries to favour your party. Since control of the Senate entitles parties to choose Supreme Court judges who serve for life and can overturn laws, a minority can not only govern but ensure that the courts override the laws the other side passes if it happens to win.

The much-praised US Constitution was never primarily about protecting human rights - it was about hammering out a deal between states. This is why the presidency is about winning states and why tiny states have as many Senators as huge ones. Most important, it is why states have the power to make their own election rules. What this can mean was best illustrated by the election of Georgia's governor in 2018: the Republican candidate was also in charge of running the election, since he happened to be Georgia's secretary of state (amazingly, he won). While this may be an extreme case, states have plenty of leeway to tilt the table in favour of the party in power.

Inevitably, this has led to all manner of inequities. Democrat John F Kennedy's win in 1960 may have been a product of some irregular help from Democrats in the state of Illinois, and in 2000, the Republican presidential candidate, George Bush the younger, won despite losing the popular vote because he was awarded the state of Florida, where his brother was the governor, and where the voting machines were faulty. (Pause to imagine what the US democracy promotion industry would have said if that had happened in Burundi.) But no one minded much because the country was not as polarised as it is now.

This polarisation is surely a product of a core American divide: race. For much of America's life, white control was unquestioned: Franklin D Roosevelt's New Deal coalition, remembered as the high point of progressive US politics, included Southern white supremacists. But the US has become far more diverse, and whites are due to become a minority within 20 years. This is seen as a mortal threat by whites in small towns and rural areas in particular. Since the effect of the rules is to give towns and rural areas far more power than big cities, the system now further fans the flames of division, which is why US elections are coming to look more and more like those in the Global South.

The lesson is surely clear. "Western" democracies are not "the real thing" against which all others should be measured. They are no better than, and may sometimes be worse than, those everywhere else. Nor is democracy a "Western product" - the right to govern ourselves belongs to everyone. The US election reminds us to shed our democratic inferiority complex and to end the myth that democracy is somehow the property of the West.