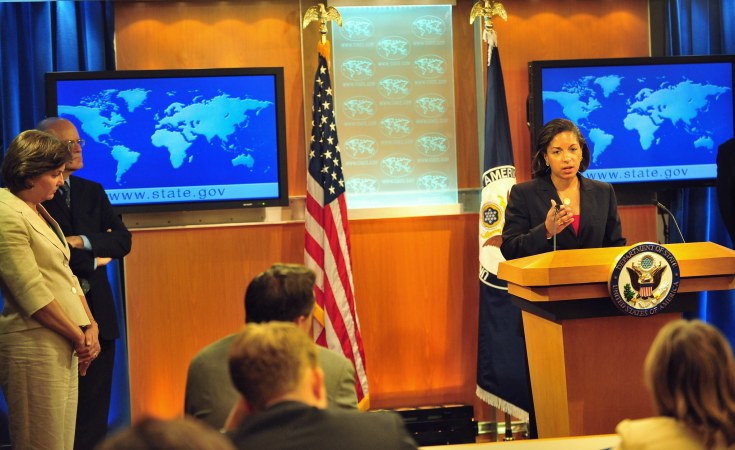 U.S. Department of State/Flickr
U.S. Permanent Representative to the United Nations, Ambassador Susan Rice, addresses reporters in a special press briefing on the New Republic of South Sudan, at the U.S. Department of State in Washington, D.C., on July 7, 2011.
Radio France Internationale
By Laura Angela Bagnetto

Although many African political experts look with renewed hope to the administration being put in place by US President-elect Joe Biden, others believe that only the tone of American policy will change towards the African continent, not the substance.

"I think that there's a general expectation globally that the Biden administration will reverse the four-year nightmare... looking for a reset in US relations on Africa, but I don't see any major change," says Sebastian Spio-Garbrah, head of Da Mina Advisors, a political risk consultancy with offices in New York.

He is referring to President Donald Trump's disdain for Africa, the discriminatory visa restrictions against Sudan, Somalia, and even Chad at one point. Trump reportedly described some African nations as "shithole" countries, and mispronounced the names of others, including Namibia and Tanzania.

"For instance, the sanctions on Zimbabwe. Is Biden going to lift them? I don't think so," adds Spio-Garbrah.

Renewed efforts at maintaining or furthering trade ties are likely to take a back seat to issues like democracy, according to Spio-Garbrah. But the possible installation of Nigerian economist Ngozi Okonjo-Iweala as the head of the World Trade Organization would definitely push African concerns to the forefront, he says.

"I believe the Biden admin supports her, as Trump has not," he adds.

"Even though Africa will be part of the agenda, I would expect the focus to be largely about democracy, not about economics... and expect the Biden administration to be much more muscular in their response in terms of sanctions, going publicly against those regimes in Africa where there are bad elections," says Spio-Garbrah.

Biden is slated to name his cabinet on Tuesday, but it is already evident who he is surrounding himself with regarding the Africa agenda. One name that has been repeatedly floated - even as potential vice president - is Susan Rice, who has held a number of positions related to Africa from the Clinton administration onwards, including as policy advisor, assistant Secretary of State for Africa, former UN ambassador, and national security advisor under the Obama administration.

She is currently part of the Biden transition team, and has long had a professional relationship with him.

But she carries a lot of baggage from past handling of crises on the African continent, from Libya to Rwanda.

She has been repeatedly accused of sidling up to African leaders considered to be dictators, including Ugandan President Yoweri Museveni and Rwanda's Paul Kagame.

UN watchers remember that she held back a UN report that indicated Kagame supported M23 rebel fighters in the Democratic Republic of Congo, as a way of shielding him from criticism, or even sanctions.

She also formerly worked for Kagame as an advisor.

While working as the US ambassador to the UN, the US State Department, in a rare move, distanced themselves from Rice's claim that the 2012 attack on the US embassy compound in Benghazi, Libya, which killed Ambassador Chris Stevens and 3 other Americans, was a reaction to a movie that was screened earlier in the week.

"If she is named Secretary of State I believe Africa would have some importance in the general orientation of the administration," says Spio-Garbrah. "Even if she is named, the traditional needs and roles of the American government is still Europe and Asia to a degree. I do not see a major focus on Africa," he adds, weighing the geopolitical balance.

On the positive side, Biden has included retired and much-respected Linda Thomas-Greenfield, the former assistant Secretary of State for African affairs and former US ambassador to Liberia to head the Biden-Harris transition team.

Previous Story
The Biden Administration's Approach to Africa
Next Story
What Would a President Biden Do About Africa?

The Biden Administration's Approach to Africa

What Would a President Biden Do About Africa?