Congo-Kinshasa: Defeating Ebola in the Democratic Republic of the Congo 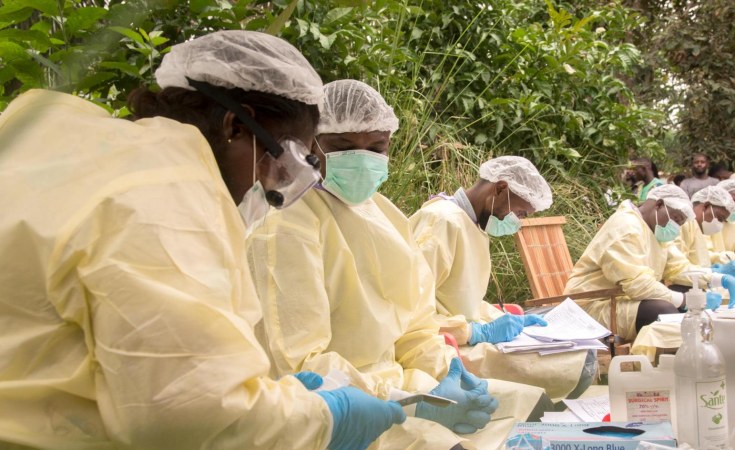 Mbandaka — Jeudi Mputu felt unwell. He went for a check-up at an Ebola treatment centre where he tested positive for the virus. However, his visit was short-lived. He fled the facility. A few days later he was readmitted. He escaped once more. "I thought I was going to die," he recalls.

A crushing fear of the disease among many in his neighbourhood in Mbandaka, the capital of Equateur province in the Democratic Republic of the Congo (DRC) hobbled the response to the country's 11th Ebola outbreak, which flared up in June 2020. Terrified of the rare but often fatal disease, many people were wary and unreceptive of the response teams working to halt the virus, while lack of a clear understanding of Ebola prevention and treatment fuelled misconceptions.

"When people don't have the right information, they are reluctant," says Dr Mory Dr Mory Keita, the World Health Organization (WHO) Ebola Incident Manager in Equateur province. "In the community Ebola is seen as a grave and mortal danger. This causes fear and reticence."

Community resistance was one of the major challenges the DRC government, World Health Organization (WHO) and other partners faced during the response. Working with youth leaders and local authorities helped facilitate acceptance and allow response teams reach the affected communities. The youth leaders and went door to door and persuaded reluctant people to seek treatment or get the Ebola vaccine which provides highly effective protection.

For Mputu, it took the persuasion of Heritier Bolanda - a youth leader - to return to the treatment centre and stay until he was cured.

"Our work wasn't easy. We had to sensitize a community that did not believe that the disease is real," says Bolanda, referring to his hotspot neighbourhood in Mbandaka. "We monitored cases, but importantly referred people with symptoms to health facilities."

With affected communities spread across 13 of Equateur's 18 health zones spanning a wide geographic area, access to many localities was difficult. In addition to the expansive distances, road travel remained limited in the densely forested region, with some remote areas only accessible by air or by boat.

Overcoming the logistical challenges also meant decentralizing the response and working closely with community health workers to set up response systems and make them effective at the local level.

Part of the strategy included meticulous listing of contacts of an Ebola patient by community surveillance teams. This enabled emergency responders to rapidly circumvent the virus. "We managed to contain every case within the area in which it was reported. This helped to limit the spread," explains Dr Jeremie Muhundo Vutenga, an epidemiologist and a member of the surveillance team in Mbandaka.

Once contact-tracing and surveillance were established within an area, vaccinations teams moved in to break the chain of transmission. In Ingende locality, for instance, it took just one month to contain the disease from the time the first case was confirmed.

The surveillance system also included community mobilizers like Bolanda, who explains that by making home visits he alerted health facilities of around a dozen cases. "I am proud to have helped save lives and contributed to the Ebola response," he says.

"In this outbreak we were present even in unaffected areas. Expanding response activities in such areas helped detect new cases by locality," Dr Keita explains.

The response teams have built a lot of expertise in fighting Ebola, and they were able to devise strategies to counter the virus. The Equateur province experienced a three-month Ebola outbreak which ended in June 2018. Investment in local health worker training during the earlier outbreak paid off. Swift action by laboratory technicians trained during the 2018 response helped detect the first cases in the 2020 outbreak and enabled the government to respond quickly.

During this outbreak, more than 5000 health workers were trained in infection prevention. Additional training is to be conducted over the next three months to strengthen health worker knowledge and skills for an effective emergency response.

Protecting health workers proved vital to the response. With over 8000 health workers vaccinated against Ebola, no cases were reported among health workers during the outbreak., which was declared over on 18 November 2020. There were a total of 119 confirmed cases, 11 probable, 55 deaths and 75 people who recovered.

New Strategies At Work in Eleventh Ebola Outbreak in DRC 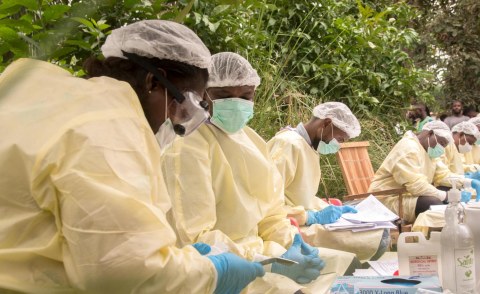 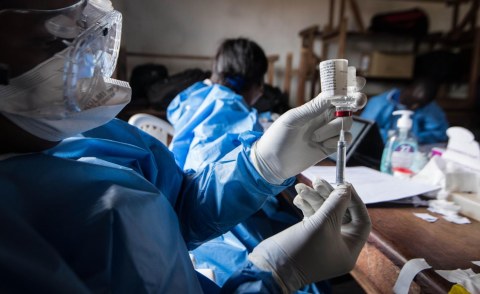 Ebola Vaccine Stockpile Set Up to Fight Future Outbreaks
Tagged:
Copyright © 2020 World Health Organization. All rights reserved. Distributed by AllAfrica Global Media (allAfrica.com). To contact the copyright holder directly for corrections — or for permission to republish or make other authorized use of this material, click here.