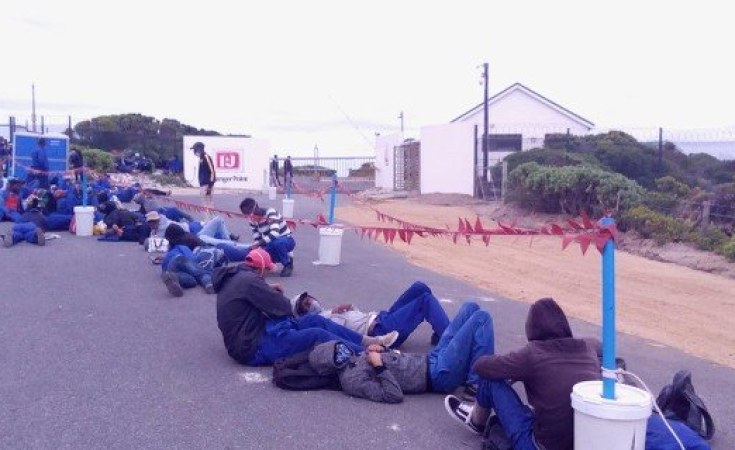 Supplied
Workers from I&J Danger Point in Gansbaai were locked out of their workplace on Monday, following a notice by the company that they would not be let in until they accept a 5.5% increase.
GroundUp (Cape Town)
By Liezl Human

100 workers went on strike at I&J's Gansbaai facility over wages.

The workers say they earn R28 an hour while equivalent I&J workers in Woodstock earn R40.

I&J has locked out the strikers on a 'no work no pay' basis, offering them a 5.5% increase.

General secretary of the Independent Commercial Hospitality and Allied Workers Union (ICHAWU) Dale Fish has been banned from all I&J workplace sites after a strike by employees of I&J Aquaculture Danger Point in Gansbaai.

About 100 employees went on strike on 12 November, demanding a wage increase to have salaries in line with colleagues at I&J Woodstock.

A day after the strike began, I&J sent a letter to ICHAWU saying Fish is "no longer welcome at any of the I&J workplaces" due to two "unlawful" gatherings outside the I&J Woodstock building and the I&J Danger Point building (on 15 October and 5 November, respectively).

Fish, however, said that these were not illegal gatherings and it was just him "addressing workers" after they wanted to see him. Fish also said that he didn't understand why the company only banned him right after workers started to strike, instead of earlier when the gatherings took place.

Following Fish's ban, I&J gave notice of a lockout which started on Monday 16 October, preventing about 100 employees from entering the Danger Point workplace.

The notice read that the lockout of employees would continue until striking employees agree to the 5.5% increase. "The principle of 'no work, no pay' shall apply for the duration of the lockout," the notice read.

An employee at the company and a member of ICHAWU, Goitse Seieumeng, said that when they tried to go to work on Wednesday morning, they weren't allowed in. "They want to force us to take the 5.5%," said Seieumeng.

He said that workers are currently demanding at least a 9% increase, which was initially 15%.

Fish told GroundUp that no progress has been made with negotiations. Employees from Danger Point want a similar rate or at least come close to R40, he said.

"It's grossly unfair that certain workers get [more] in Woodstock ... It's all I&J ... The structures are all the same. Only thing that's different are the rates," said Fish.

We were unable to get further comment from I&J.