Malawi: How It Took a Village to Create a Brighter Future for Girls in Malawi 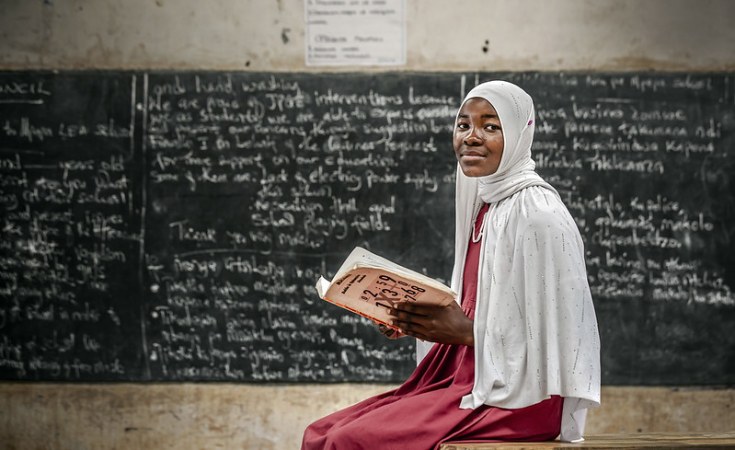 Luis Tato/UNFPA
"I have made a decision to focus on my education so that I can be an independent and empowered woman," said Aisha. At Mpapa Primary School, the annual drop-out rate for girls was 26 per cent in 2017. By 2020, it had dropped to just 6 per cent. Nationally, only 51 per cent of girls complete primary school.
UNFPA East and Southern Africa (Johannesburg)

Mangochi, Malawi — In a year of little good news, pockets of Malawi are bucking an uncomfortable trend.

A significant number of girls were dropping out of school each year to marry early or give birth, losing the best opportunity they had to carve a better future for themselves. Then came school closures brought about by a national lockdown to stop the spread of COVID-19. For many, the situation worsened.

But not for girls living in the villages of Group Village Head Grace Anafi Mndima, in Traditional Authority Jalasi, Mangochi.

Here, ten women, who endured personal difficulties because they were unable to complete their education, came together to stop this cycle repeating for their own daughters - and for other girls in their respective villages. These mothers know the story only too well. For their daughters' sake, they wanted to change the downward trajectory.

Theirs is an inspirational story.

A girl who has benefited from the twice monthly mentoring sessions with the mothers' group is Aisha Kayima, 15, a standard 7 pupil at Mpapa Primary School. "Due to access to the right information, my choices about the future I want are better informed," she said.

But for many girls, the ability to attend school is not a given.

Esther White, who is chairperson of the Mpapa mothers' group, explained how they remove obstacles to girls' education: "We monitor the wellbeing of adolescent girls by ensuring that they attend school daily, and mediate if they have issues that might hinder their access to education," she said.

In this task, the mothers quickly realised that they would need the wider support of their communities. Nationally, almost one in two girls - or 47 per cent - marries before age 18, bringing their education to an early end. The mothers joined forces with community leaders to rescue girls who had been forced into early marriage or who had become pregnant at a young age. Working together, they helped these girls return to school.

Soon they were seeing results. In 2019, 1120 girls who had dropped out of school in Group Village Head Mndima's area returned to continue their education, according to Cecilia Chinula, Adolescent and Youth Specialist for UNFPA in Malawi.

Rescued from marriage, girls and boys go back to school

Along with the village chief, the school administration and other community members, Mpapa's efforts have also been instrumental in ensuring very low rates of teenage pregnancy and child marriage in their communities.

Through a community-based GBV prevention structure, 55 girls and 17 boys were rescued from forced or early marriage. Just four teenage pregnancies have been recorded in their area to date during the nation's wrestle with COVID-19.

Then came the pandemic, presenting a significant threat to their hard-won successes. The Mpapa women's group were determined to keep girls' education on track, even if it meant adding a new weapon to their arsenal - that of masks.

"We provide homemade masks to ensure that adolescent girls and young women continue to attend school and do not use the lack of a mask as an excuse," said Ms. White.

She is pleased that the low child marriage and teen pregnancy rates have been maintained, even during the school closures this year.

Leading change for girls, one girl at a time

Group Village Head Mndima has been a champion for their cause. 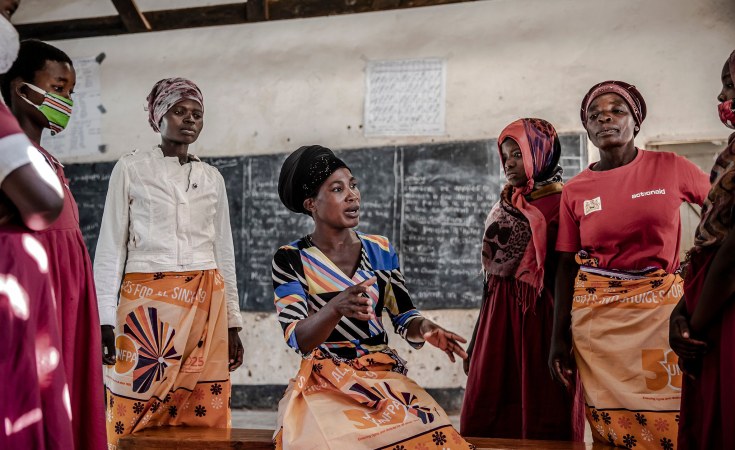 Luis Tato/UNFPA
Esther White (seated), chairperson of Mpapa mothers’ group, married early and did not complete her schooling. Here, she and two other members of the group mentor adolescent girls on sexual and reproductive health, to avoid the pitfalls they experienced to completing their education.

Her work with community groups such as the Mpapa mothers' group to make this vision a reality has earned her praise.

Dr. Julitta Onabanjo, UNFPA Regional Director for East and Southern Africa, recently undertook a trip to the region to understand how community efforts such as the mothers' group have achieved such impressive results.

"We want to continue to see good results, so please keep girls in school and ensure that there are no teenage pregnancies or child marriages," she urged Group Village Head Mndima and those working with her to support these efforts.

Patrick Chibayo is Head Teacher at Mpapa Primary School. He has witnessed a drastic improvement in school retention for girls. At his establishment, life skills are imparted as part of Malawi's education curriculum, to reinforce positive messages around girl's education, and sexual and reproductive health and rights.

Aisha Kayima agrees with this approach to empowering girls and boys while still in school: "We learn about the dangers of teenage pregnancy, early child marriage and early sexual debut," she said.

Ensuring girls menstruate with dignity while in school

There's another critical aspect to empowering girls that the Mpapa mothers' group has assumed willingly - ensuring that girls don't miss out on school due to their periods.

Using machines provided by JPGE, the mothers make about 20 reusable menstrual pads a day. They provide these for girls at school.

"Every single pad made brings joy into our lives, as we know that girls attending school will manage their periods with dignity, enabling them to continue their education and not have periods as a blockage to their bright future," said Ms. White.

However, resolving the purely physical management of menstrual health did not take care of all the girls' needs in this respect. Stigmatization is a reality they also deal with.

For this reason, the women also focus on building a more positive sense of masculinity among schoolboys, imparting to them the need to support girls who are menstruating, instead of laughing at them or making discriminatory remarks. Their approach has changed boys' attitudes.

"Through life skills and mentorship sessions provided to us by Mpapa mothers' group, I have learnt not to stigmatize adolescent girls and young women during their periods," said Sam Loganie, 17, a standard 7 pupil at Mpapa Primary School.

This community endeavour to empower girls, together with the support of JPGE, is reaping rewards.

"I have made a decision to focus on my education so that I can be an independent and empowered woman," said Aisha.

It is precisely this that the Mpapa mothers' group intended to foster - a new generation of young women who are empowered to reach for and achieve their potential, unhindered by the traps of child marriage, teen pregnancy and school drop-out.

Their combined efforts are testimony to the African proverb that "It takes a village to raise a child."

* With the support of the Government of Norway, the Joint Programme on Girls' Education (JPGE) is being implemented by UNFPA, UNICEF and the World Food Programme in 169 schools in the districts of Dedza, Mangochi and Salima. It aims to improve access to, quality and relevance of education for girls, through addressing the key known threats to girls' education. These include poor food and nutrition, inadequate protection against sexual and physical violence, poor quality schooling, harmful social and traditional practices, and the violation of girls' sexual and reproductive health and rights.

Tagged:
Copyright © 2020 UNFPA East and Southern Africa. All rights reserved. Distributed by AllAfrica Global Media (allAfrica.com). To contact the copyright holder directly for corrections — or for permission to republish or make other authorized use of this material, click here.