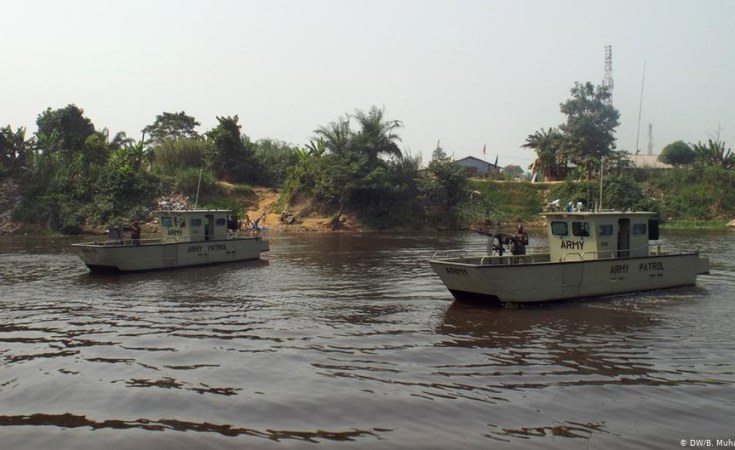 B.Muhammed/DeutscheWelle
Patrol boats off the coast of Bayelsa state in the Niger Delta's oil-rich region.
Vanguard (Lagos)
By Lawal Sherifat

The Interim Administrator of the Presidential Amnesty Programme, Col Dixon Milland Dikio, held a crucial meeting with critical stakeholders in the Niger Delta on the future of the Programme in Yenagoa on Thursday.

The stakeholders agreed that the PAP could have a terminal date after the full integration of the 30,000 beneficiaries of the Programme.

The stakeholders included traditional rulers, political leaders, past and present leaders of the Ijaw National Congress, and the Ijaw Youth Council.

After hours of deliberations, the meeting agreed that the PAP cannot run in perpetuity and should have a terminal date subject to the full integration of the beneficiaries.

The meeting also focused on the challenges identified to have bedeviled the Programme over the years.

The stakeholders were unanimous in calling on the Federal Government to ensure that the programme is given the needed financial support to effectively implement the reintegration of the beneficiaries before it finally winds down.

The stakeholders who thanked President Muhammadu Buhari for appointing Colonel Milland Dixon Dikio (rtd) as the interim administrator expressed optimism that with him the objectives of the PAP would be realized.

The stakeholders called on Dikio to adopt drastic measures to address the incidence of rot and corruption in the Amnesty office by identifying all those who have used the Programme as a conduit pipe and relieve them of their positions.

They lamented that the bad eggs in the Amnesty Office have derailed the programme because of their greed and fraudulent activities.

The leaders stressed that until the corruption cabal is flushed out, the usual crisis that rocks the PAP will still resurface.

While calling for support for Dikio, the stakeholders equally thanked him for embarking on the tour to the region, which they describe as a positive indication of his desire to succeed in his critical assignment.

On the issue of reintegration and empowerment, they advised him to consider agriculture as a major component of his plans, and also to operationalize the training centres of the PAP.

In his remarks, Colonel Dikio said he decided to convene the stakeholders summit to personally interact with the custodians of the region.

He said the meeting afforded him insight into the plights of the people and promised to hold similar quarterly engagements in the region.

Dikio said the collective agreement that the programme should have a terminal date should be noted by all beneficiaries as it had been a contentious issue among most of them.

The Amnesty Boss who solicited for sustained support said with his vision for the PA, all those who are part of it will not be left out.

In their goodwill messages, the Governor of Bayelsa State, Senator Douye Diri, represented by the Commissioner for Ijaw National Affairs, Patrick Erasmus, promised the support of the state government for the new Amnesty Boss.