Uganda: How Museveni Mastered Violence to Win Elections in Uganda 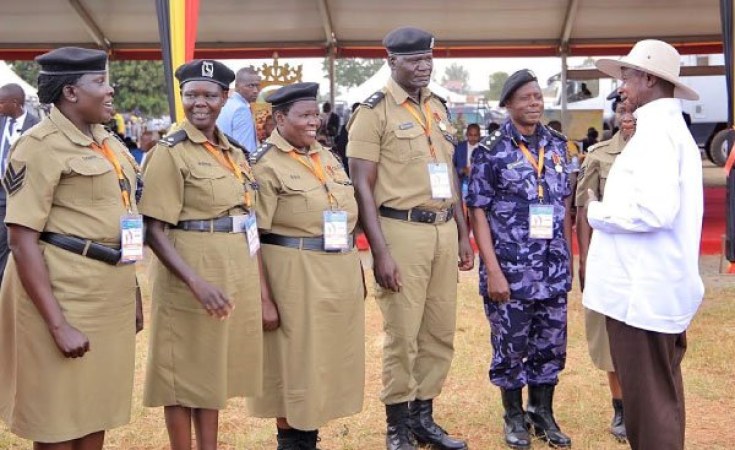 Repeated arrests and office raids are part of a strategy designed to project control without overly provoking domestic or international criticism.

On 18 November, Uganda's musician-turned-politician and presidential hopeful Robert Kyagulanyi (aka Bobi Wine) was arrested while addressing a political rally in eastern Uganda. His seizure led to protests in the capital Kampala and other towns. These demonstrations were met with serious violence by security forces - comprising not just police, but the army, local defence units and plain-clothed officers - who were filmed shooting in central Kampala. Official figures speak of 7 people killed and 45 injured. Hospital records suggest 16 deaths.

The previous time Bobi Wine was arrested occurred just two weeks ago immediately after he submitted his papers to register in 14 January 2021 presidential election. On that occasion, he was quickly released. This time, Wine is still detained with five supporters and another opposition presidential candidate, Patrick Amuriat. They are accused of violating guidelines issued by the electoral commission to contain the spread of COVID-19.

It remains to be seen what will happen next, but these events are not exceptional. In fact, they illustrate the way in which Bobi Wine has little chance of winning in 2021 despite his popularity, especially in urban centres. This is because President Yoweri Museveni, who has been in office since 1986, has increased his control over the electoral sphere and perfected his strategies for winning elections - of which Wine's repeated arrests are a part.

Here are some of the key items in Museveni's toolbox that we will likely see increasingly in the coming weeks and months.

A key strategy of the Museveni regime is to clamp down as early and consistently as possible. Even from early in the election campaign, police will violently break up opposition events, raid or close their party offices, and arrest their leaders for brief periods - as happened yesterday.

The message of these repeated actions is clear: to signal to the opposition and their supporters that there is no space for them; to send the message of who is really in charge; and to discourage even the slightest hope of success. Protests in reaction to these arrests are just as quickly supressed. State violence intends to tire out opposition supporters, erode their zeal and resistance. At the same time, the regime lets candidates who have little following but may split the opposition vote roam relatively freely.

The ruling National Resistance Movement's (NRM) complements this by projecting its hegemony in other ways too. In the last election cycle in 2016, for instance, the government recruited a volunteer force of "crime preventers" across the country. These individuals' official role was to help reduce crime. In reality, they worked to convey the omnipresence of the military and carried out brutal assaults with no accountability. Other incidences such as the regular break-ins of the offices of human rights NGOs cannot be directly tied to the state, but also contribute to the NRM's message of deterrence.

But don't go too hard

An essential part of the NRM's above strategies is that they are relentless but rarely too extreme. Museveni has learnt this after seeing the response to more overtly repressive measures. In the run-up to the 2006 elections, for instance, the arrest of Kizza Besigye on fabricated accusations of rape sparked riots and increased the opposition candidate's popularity. The 2018 arrest and alleged torture of Bobi Wine similarly provoked popular protests and outcry in Kampala and beyond. Yesterday's violence seems to challenge this rule and may ultimately harm Museveni.

The regime's relative restraint also avoids overly riling international donors. Given Uganda's reputation as a beacon of stability and its contributions to regional peacekeeping missions, Western diplomats are typically reluctant to express more than mild criticism of Museveni's government. They only do so in cases which are big enough to warrant attention from western audiences, such as the anti-gay bill. The arrests of Besigye and Bobi Wine in 2018 similarly surpassed that threshold.

As a result of these experiences, the Museveni regime has become a master in using an arsenal of measures which are limited in time and intensity but whose message is clear enough. It exerts continued pressure in a way that makes opposition leaders' lives difficult but without escalating into major events.

In 2016, for instance, Besigye was repeatedly arrested and spent significant periods under de facto house arrest. And currently, the regime is utilising a similar strategy with Bobi Wine, frequently arresting him and severely curtailing his movement but without detaining him for long stretches. The NRM is also attempting to undermine the opposition leader by painting him as a stooge of the West - playing off Wine's engagement with foreign help and his popular reception in Western media outlets - in a similar manner portraying him as an enemy of stability to how it previously accused Besigye of being linked to rebel forces.

Another part of this tactic is to take violent repression out of the main centres of attention. Instead of targeting high-level figures, the NRM focuses attacks on and abductions on opposition figures with lower profiles or outside Kampala. These actions attract less media attention but no less effectively spread the message of dominance at the grassroots. Again, yesterday's events - with plenty of images circulating on social media of civilian bystanders being hit and police brutalities, particularly in Kampala - might lead to a backlash for the NRM.

Engage with the youth

Museveni does not just use the stick. There's also the carrot. This is particularly important for appealing to the youth in a country where about 77% of people below the age of 25. These voters did not live through war and are less persuaded by the regime's claim that it brought peace to Uganda. Instead therefore, the NRM has tried to attract young people through other means. It released a rap song featuring the president in 2010. It has increased its focus on social media. And, in order to combat Bobi Wine's "ghetto" credentials ahead of 2021, it has enlisted several musicians with assumed "street cred" as paid advisers.

The regime has also used money to attract support, particularly among the youth. President Museveni hands out brown envelopes full of cash to individuals and associations around elections, while candidates spend tens of thousands of dollars in the course of their campaigns. While effective and now expected among the electorate, limitless patronage is not without risks. In 2011, the plundering of state coffers for campaign spending saw inflation skyrocket after the elections. This triggered the Walk to Work protests, the most sustained and widespread demonstrations against the NRM government so far. With economic constraints exacerbated by COVID-19, there is little money to go around among an ever-growing voting population this time. This precipitates a greater reliance on force as a key strategy.

Many believe that Museveni's victory on 14 January 2021 is a foregone conclusion. More than a decade after the reintroduction of multiparty politics, Uganda still functions as an NRM state and the president's grip on power remains tight.

While this may be the case, however, there is another more uncertain battle ongoing in the background to this election. Some people expect that this will be Museveni's last race and that he will appoint a successor ahead of the 2026 elections, by which time he will by 80 years old. The most likely candidate currently is his son Muhoozi Kainerugaba. The powerful former Special Forces Commander's supporters are already marketing "Muhoozi 2026" on social media and in the corridors of power. Moreover, several of his allies - whose tentacles stretch across military, government, and media - are running in the 2021 elections. All of which begs the question of how well the NRM might be at winning elections for someone other than Yoweri Museveni.