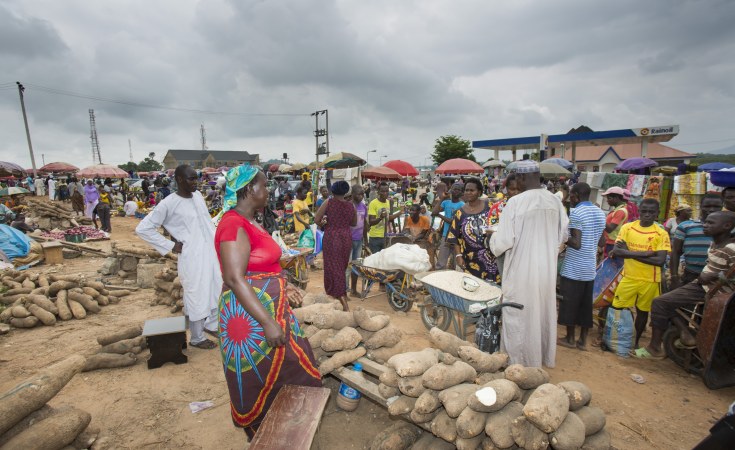 The soaring cost of food items and other necessities have further worsened the predicaments of Nigerians as the economy slumped into another round of recession, Daily Trust on Sunday reports.

The hike in food prices and other items across the country was said to have increased the rate of inflation in Nigeria to 14.23 per cent in October 2020.

But experts who spoke to our correspondents yesterday said that recent developments were not peculiar to Nigeria alone, saying the country would remain stable despite obvious challenges.

Others said there was no need to panic because the federal government could borrow more money and oil the economy.

They said people who have cash at their disposal would also make money now if they invest in property and other assets.

Why Nigeria slumps into another recession

Figures released earlier by the National Bureau of Statistics (NBS) showed that the country's inflation increased in October, moving up by 0.52 per cent when compared to what was recorded in the preceding month.

The NBS stated yesterday that Nigeria's economy had slumped into recession as the nation's Gross Domestic Product (GDP) contracted by -3.63 per cent in the third quarter of 2020.

This is the second time the GDP would contract in 2020, indicating that the economy is now formally in recession.

Records show that this is Nigeria's second recession since 2016.

The GDP report released yesterday by the NBS revealed that cumulatively, the economy has contracted by -2.48 per cent, and this represents an improvement of 2.48 per cent points over the -6.10 per cent growth rate recorded in the second quarter of 2020.

Speaking on the latest recession, the immediate past President of the Abuja Chamber of Commerce and Industry (ACCI), Tony Ejinkeonye, said that for the average Nigerian, recession means there would be loss of jobs and reduction in income, which will affect the already low standard and quality of living.

"Debts will increase, with savings and investments practically vanishing. Our public schools might get a new influx of students as parents might probably withdraw their children and wards from private schools. Entertainment and leisure places like hotels and restaurants are likely to face a drastic drop in patronage, equally worsened by the COVID-19 pandemic," he said.

Also speaking, a Professor of Capital Market, Uche Uwaleke, said the NBS third-quarter real GDP number was a confirmation of the fact that in terms of economic contraction occasioned by COVID'19, the second quarter of 2020 represents the worst experience for Nigeria.

Professor Uwaleke, a former commissioner for finance in Imo State, observed that compared to a contraction of 6.10 per cent in the second quarter of this year, it is an improvement reflective of the ease in lockdowns and movement restrictions, as well as the gradual return of investors' confidence in the economy.

He, however, observed that the performance of the agriculture sector in real terms, which came in at 1.39 per cent, was disappointing, adding that it corroborates the high food inflation rate now above 17 per cent, caused in large part by insecurity in many parts of the country.

Life not easy at all - Families

Checks by our correspondents indicate that the prices of food items have continued to skyrocket across states beyond the reach of an average Nigerian.

This is even before the NBS announced that the country had slumped into another round of recession.

In Kano, prices of food commodities have been going up almost daily in most markets, making life difficult for the masses.

A visit to some of the markets revealed that an increase of over 50 per cent has been recorded on some foodstuff when compared to the cost of such commodities in the previous year.

It was also discovered that many other agricultural commodities are becoming unaffordable to many residents.

Malama Fadila Ado, a mother of four and resident of Sharada Quarters, revealed that due to the rising cost of food items, many of them have been forced to adopt a new food pattern, such as combining sweet potatoes with beans.

They also process maize flour as against maize grains to make food.

Another resident, Malam Ado Maihula, lamented that many households in the state had been forced to change their daily food menu and base their demands on their purchasing capacity.

He added that the hike in prices recently experienced calls for authorities' attention as things were gradually getting out of hand and beyond the reach of the common man.

Similarly, Malam Ahmadu Danlami Tofa, a grain merchant at Dawanau International Market, told our correspondent that the hike in prices recently recorded was not seen in the last 10 years.

In Bayelsa, both sellers and buyers in various markets are lamenting the sharp increase in the cost of food items.

Our correspondent who visited markets in Swali, Opolo, Kpanzia and Zerama communities, all in Yenagoa Local Government Area, observed that the increase in prices of food items remains a source of worry to residents.

Mrs Chinyere Chidi, who deals in food items such as yam, beans and rice, said they have been recording poor sales following the hike in the cost of food items.

A fresh fish dealer at Opolo market, Timi Tommy, said a sizeable catfish, which was sold at N1, 500 last year, is now sold between N2, 500 and N2, 700. He added that though fish is a seasonal food, it is always cheaper during the dry season.

A consumer at the Swali market, Mrs Regina, said the rise in prices of food items had caused untold hardship to the people of the state, especially the less privileged.

"It is disturbing. We are approaching Christmas season and everything has gone up, even when people do not have enough money at their disposal. I just wonder how we will survive it," she said.

In Cross River State, residents complained that the prices of food items were beyond their reach.

Checks at the three major markets in Calabar, namely, Mbukpa, Watts and Marian indicate a sharp increase in the cost of staple foods.

A housewife, Mrs Margaret Akpan, who bemoaned the situation, said she now travels over seven hours to the hinterlands where she could get some of the food items at a lesser cost.

Mrs Akpan said life had been very difficult as her husband's pension no longer came.

In Ibadan, the Oyo State capital cost of food items have also increased by about 110 per cent.

Abimbola attributed the hike in prices of the foodstuffs to fuel price increase, poor infrastructure and lack of adequate rainfall this year.

Chairman of the Onion Sellers Association in Oyo State, Alhaji Adeola Azeez, advised that government should provide modern storage facilities for preserving the commodity to prevent frequent scarcity, particularly during the off-season.

Mrs Omobonke Adunola, a tomato seller in Bodija market, and Mrs Munirat Akinade, a housewife, decried the rate at which prices of foodstuff kept going up in the last one month.

In Jos, the Plateau State capital, the woman leader at the tomatoes market, Ruth Izang, decried the astronomical rise in the prices of food items, saying the situation is making life unbearable for many families.

She said many families who were managing to eat thrice a week are now managing to eat once, adding that those who used to buy foodstuffs in bags are now buying in small quantities. She called on the government to introduce price regulations, especially on foodstuffs.

A resident of Ring Road, by Yan Trailer, Mary Aladioke, said many families were being strained due to the food price hike, adding that "many cannot even afford to eat rice anymore."

Benue, the "Food Basket" state has also been witnessing a rise in prices of food items, which has become a source of worry to consumers, especially low-income earners.

Our correspondent who surveyed some markets in Makurdi metropolis reports that in recent times, the cost of some food items has doubled their usual prices, leaving consumers to groan.

The price of the same quantity of foreign rice is being sold at Modern Market in Makurdi at N35, 000 instead of N26, 000 it was sold last year.

A consumer, Funke Ejembi, expressed worry that the prices were increasing daily, noting that soon, most families won't be able to take a square meal if the situation continues to degenerate.

In Nasarawa State, findings by our correspondent revealed that prices of food items have also gone up compared to last year. Prices of commodities such as rice, millet and maize have increased.

An official of the Traders Union in Keffi, Alhaji Rabo Namama, who decried the situation, said the only means to reduce the rising cost of foodstuffs was for the government to give soft loans or one digit interest loan to traders to grow from retailers to dealers.