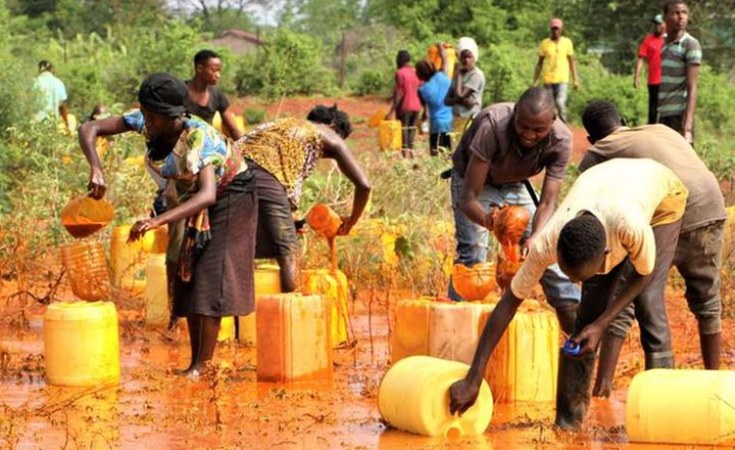 Water Resources Authority (WRA) has cautioned people living along River Kambu in Makueni County against using its water after a train spilled 750, 000 litres of palm oil in the region.

The seasonal river, which drains into River Athi, is the main source of water for domestic use and irrigation in the region.

"Following a cargo train accident that spilled unprocessed cooking oil in River Kambu, the public is cautioned against using water from the river for domestic, livestock and agricultural purposes until further notice," says the notice dated Thursday and signed by Mr Ngao Munyao, the WRA manager in-charge of the Middle Athi region.

"The caution covers the section of the river adjacent to Kamulalani-Kalimani market road downstream". The water agency pasted the notice at strategic points in local markets on Thursday, two days after the latest train accident on the old railway line.

The old line is prone to accidents, most of them involving cargo trains.

The train hauling 17 tankers towards Nairobi was attempting to climb a gentle hill on Tuesday afternoon when it developed a mechanical problem.

Witnesses and the crew said it suddenly stopped and reversed for more than 10 kilometres.

Ms Sarah Ndisemba was herding cattle near the railway line when the accident happened.

"The train had just passed the area where I was herding cattle towards Nairobi when I heard it hooting as it reversed," she told Nation yesterday.

It derailed and hit one of her cows, which died instantly. Makueni police commander Joseph ole Napeiyan said the train overturned at a corner when it veered off the railway line after all the wagons fell off, damaging the tracks and spilling 750, 000 litres of palm oil, according to the National Environmental Manage-ment Authority (Nema).

Movement of locomotives along the Mombasa-Nairobi railway line remained paralysed for the fourth day yesterday. Technicians from Kenya Railways Corpora-tion (KRC) worked round-the-clock to recover the wagons and repair the damaged section of the railway line as dozens of locals flocked the region to scoop the oil, which is used in making cooking oil and soap.

"We sell the commodity to traders who take it to Nairobi. A 20-litre jerrican fetches Sh450. This is the money we are using to cultivate our farmland," said Mr Boniface Matheka.

Mtito Andei MCA Francis Mulwa and Mary Mbenge, the chief officer at the department of environment and climate change in Makueni County, noted the oil could have long-term effects on the environment. They called on KRC to cordon off the affected site.

"We have issued a restoration order to Kenya Railways Corporation. They should move with speed and map out the affected region, clean the mess and devel-op a monitoring plan," Mr Leonard Tampushi, the head of Nema in Makueni County, said on Thursday.

Mr Tambushi warned the community against consuming the oil. "This is an industrial product that needs further processing".