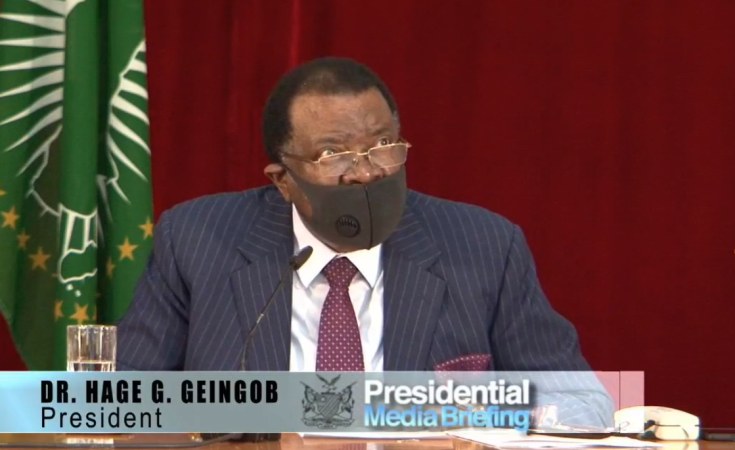 OMBUDSMAN John Walters says the remarks Swapo president Hage Geingob made at a Swapo rally on the number of white Namibians registering to vote were unifying.

Geingob in October charged that white people have "declared war" on Swapo and want to vote for "anything but Swapo".

This was, according to him, despite Swapo making sure that white people enjoyed peace, unity and comfort for "all this time".

Walters prepared a 'Persistence of Race' report on the issue after the Popular Democratic Movement (PDM) lodged a complaint against Geingob in October.

In terms of objectionable utterances, Walters said the statement uttered by the president cannot be considered "in a vacuum".

The form, context, content, time and place must be considered, he said.

In its complaint, the PDM said they viewed Geingob's comments as oppressive, intimidating and in contravention of a number of provisions in the Namibian Constitution which protects the fundamental rights of all Namibians - in particular the right to participate fully in political activity without intimidation or coercion.

The party said the comments directly infringe on the fundamental rights of white people to participate fully in political activity as protected by Article 17 of the Namibian Constitution.

The party alleged that the president's comments are also in contravention of the Racial Discrimination Act 26 of 1991, in particular Section 11.

"The general theme of the president's speech as indicated in the heading and by its content itself is victory at the 25 November polls if all Swapo party members come in full force to vote for Swapo party candidates," the ombudsman said.

Walters said even if the objectionable utterances by the president amount to a contravention of Section 11 of the Act, in that he caused, encouraged or incited hatred between different racial groups or persons belonging to different racial groups, he cannot be charged with any criminal offence, because he enjoys immunity from criminal proceeding in terms of Article 31(2) of the Namibian Constitution.

He said: "It would be an exercise in futility to refer the matter to the prosecutor general in terms of Section 5(1) (a) (ii) (dd) of the Ombudsman Act."

The ombudsman said none of the target group (white people) came forward claiming the objectionable utterances by the president violated their constitutional rights.

He said the complainants viewed the comments as oppressive and without a doubt as intimidating of white people.

He was, however, quick to say if his interpretation of the objectionable utterance is wrong and they indeed amount to intimidation, then it is a criminal offence.

It will also be misconduct under the Guidelines for the Conduct of Political Activities by Political Parties in Respect of Elections.

"In light of the above concluding observations and findings, there is no need to make any recommendation," Walters said.

THE OTHER SIDE OF THE STORY

In the report, the president said he was entitled to express his view as a Namibian citizen. He said he was making an observation of big numbers of white people suddenly registering this time around in comparison to the recent past where it was generally observed that that section of the community showed less interest in national elections.

"These statements were made in reaction to statements by a section of that population to the effect it will vote for anything but Swapo," he said.

He said he was, in the circumstances, entitled to make such comments without infringing any rights under the Constitution or the provisions of Section 11 of the Racial Discrimination Prohibition Act.

"The comments are therefore political comments to address an observation of a particular state of affairs by the president. The statements do not imply or expressly seek to intimidate white people as the PDM contends, nor do they seek to make out a case that white people have diminished political rights," Geingob said.

Djibouti Looks to Ethiopia to Gauge Its Economic Future
Trade