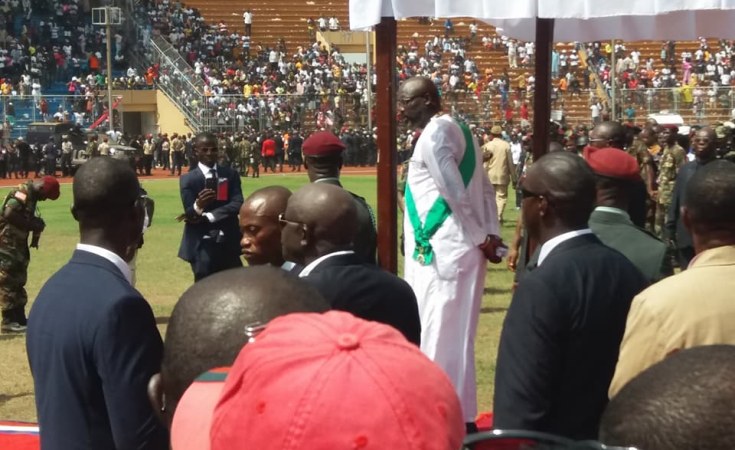 The senatorial bid of Candidate Steve Tequah has received a huge boast ahead of December 8 elections, as one of those qualified by the National Elections Commission (NEC) to contest the senate seat for River Cess, Eddie J. Strother, during the weekend announced he was withdrawing from the race to support the independent candidate.

Mr. Strother is the chairman of 'Blojay', a mass based grass root organization that is deeply rooted in the eight administrative districts of River Cess. 'Blojay' also endorsed the candidature of Candidate Tequah during the weekend.

Mr. Strother, who got the nomination of the Movement for Progressive Change (MPC) of Mr. Simeon Freeman to contest the senatorial election in River Cess, told a huge gathering in River Cess' Boe Town at an endorsement ceremony that his political manifesto is similar to that of Mr. Tequah. According to him, the independent candidate is the best candidate in the race, adding Steve has good intentions for county and country.

"Following consultations with my family and supporters, I have come to let you know that I have withdrawn from the race to support my young brother Steve Tequah in the upcoming election in our county".

"Steve and I share the same ideology. We're thinking the same way. There is no need to fight over this thing".

Strocter then called on his supporters to divert their votes to Steve Tequah. He vowed to reach out to towns and villages in River Cess to ensure that Steve is elected in the impending elections.

"To demonstrate my support to you Mr. Steve Tequah, I'm telling all of my supporters to go out and campaign for you. Even though my face will be on the ballot paper, but don't be confused. I'm no more in the race". The vote you've been keeping for me, please drop it in the box for Steve".

Responding to the endorsement, Steve Tequah lauded Eddie Strother and officials and members of 'Blojay' for the decision promising to deliver up to expectation if elected to the Liberian Senate. "Thank you plenty for this big endorsement. Thanks to 'Blojay' and Mr. Strother for this great decision. I will do my best to push your interest. I will not let you down".

Tequah said he's worried about the health and education needs of the people, and as such he would do everything to change the story if elected.

River Cess is the only county in Liberia that has one semi-functional high school, situated in the administrative seat, Cestos City. He promised to push for additional high schools for River Cess if elected senator in the upcoming December 8 senatorial elections.

Meanwhile, Mr. Strother has been named campaign manager for 'Team Tequah' campaign in River Cess. Steve Tequah is the latest to announce his candidacy in the race for River Cess. In July, 2020, Steve told a local radio talk show that he was getting in the race to change the old order of politics in the county.

He's one of the main contenders in the election. A majority of the people think the candidate is the right person for the job. They feel he stands the chance of reconciling a county divided on sectional lines. Except for the other main contenders (former Superintendent Wellington Geevon-Smith and Bob Rancy Ziankahn), Steve hasn't held position at the level of the county. He's being viewed by many as the lesser evil.

Politicians Who Instigate the Youth Undermine National Peace and Security