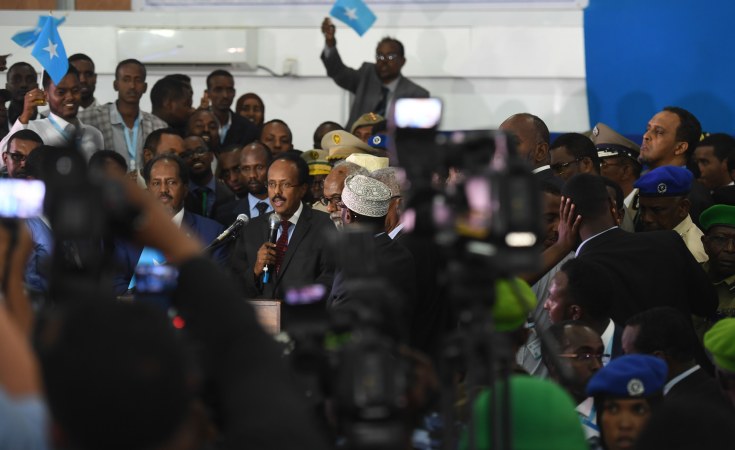 Ilyas Ahmed/UN
President of Somalia, Mohamed Abdullahi Farmajo (centre) makes an acceptance speech after he was sworn into office at the Mogadishu Airport hangar on February 8, 2017.
Dalsan Radio (Mogadishu)

The African Union Mission in Somalia (AMISOM) on Sunday handed over an assortment of IT equipment to the Somali Police Force (SPF) to help build the capacity of the National Election Security Taskforce for the upcoming national elections.

The National Election Taskforce is the highest security organ tasked with securing Somalia's upcoming national elections. It is chaired by the Somali Police Force, with support from AMISOM Police. Donated by the Danish government, the equipment comprised of multi-biometric scanners, high speed laptops, desktop computers and server racks.

"We appreciate all this equipment and we are grateful for the assistance from AMISOM Police. Without them we would not be where we are today. We are very confident that we will be able to manage the election," said SPF Police Commissioner Gen.

Abdi Hassan Mohamed, when he received the donation at a police station within Mogadishu International Airport. The equipment will be distributed to five offices across the country to help transmit real time information with his office in Mogadishu.

Deputy Commissioner of Police (DCP) Rex Dundun, who presided over the handover ceremony on behalf of the AMISOM Police Commissioner, said that AMISOM police had identified the need to support the election security taskforce with the IT equipment in order to ensure smooth operation and to secure the upcoming elections.

"AMISOM Police Component realized that the National Election Security Taskforce required some logistical capacity so as to be able to capture, store and disseminate operational and administrative information to police operatives during the election period," Dundun said.

Dundun further promised that AMISOM police stands ready to offer support to the National Election Taskforce so that it may perform its functions efficiently and effectively during the important national elections.

AMISOM Police is expected to work closely with the Somali Police Force to provide security at venues and of election officials during the upcoming national elections to ensure that the process is safe and secure.

Somali Polls Critical for East Africa - Analyst
Tagged:
Copyright © 2020 Dalsan Radio. All rights reserved. Distributed by AllAfrica Global Media (allAfrica.com). To contact the copyright holder directly for corrections — or for permission to republish or make other authorized use of this material, click here.