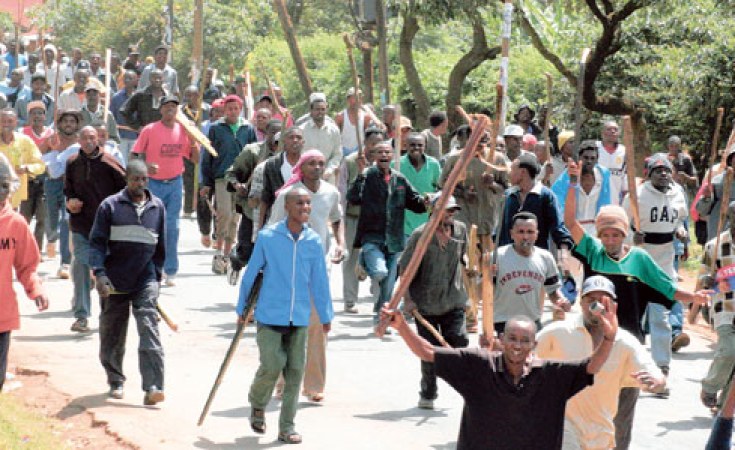 Anthony Kamau/Nation
Armed youths at the height of the post-election violence in 2008 (file photo).
Capital FM (Nairobi)
By Jemimah Mueni

Nairobi — Deputy President William Ruto on Tuesday termed the move by the Director of Criminal Investigations George Kinoti to revive investigations into the 2007-2008 Post Election Violence cases as an evil to fan tribal animosity ahead of 2022 polls.

Through his social media accounts on Tuesday, the DP who is on a private trip abroad, said the move is provocative and aimed at inciting to ethic hate and division.

The provocative INCITEMENT to ethnic hate/division INTENDED by the ressurection of PEV is an EVIL attempt to resuscitate the TRIBE project DESTROYED by the HUSTLER movements' REALISATION that poverty&unemployment DELIBERATELY bred by poor leadership is our PROBLEM NOT our tribes.- William Samoei Ruto, PhD (@WilliamsRuto) November 24, 2020

His sentiments were in reference to Kinoti's Monday proclamation to investigate select cases after he met 150 people mainly from the Rift Valley the epicenter of the 2007-2008 post -election chaos who recorded statements at the DCI.

Those who lodged complaints and expressed fears for their lives include past victims of the 2007-08 Post Election Violence (PEV), the worst electoral chaos in the country that displaced more than half a million people from their homes.

The move left Kenyans sharply divided with some supporting the move to revive the cases while hand criticized Kinoti. DP Ruto allies read malice into the issue.

Uasin Gishu Governor Jackon Mandago faulted the reopening of Post Election Violence files, saying the agency was out on a fishing expedition.

Mandago affirmed that the region is peaceful and the local governments are not aware of threats issued to specific groups further dismissing reports that people are walking scot-free.

The DCI in a quick rejoinder on Tuesday clarified that the PEV cases which were investigated and concluded will not be re-opened, saying the agency would only probe fresh threats reported by the victims.