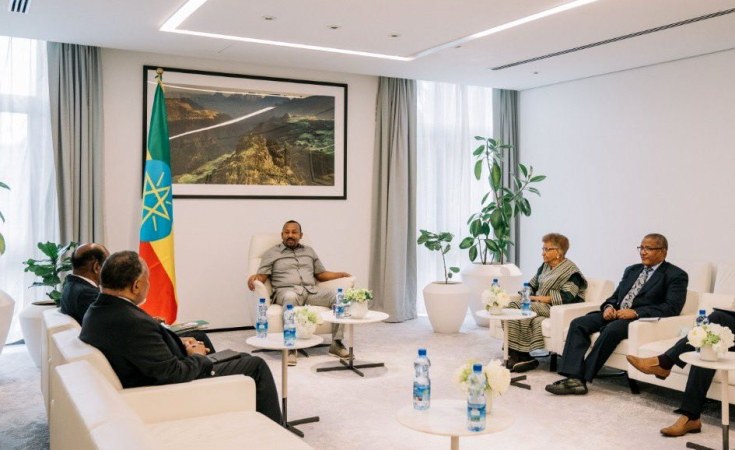 "He's only meeting with the AU delegation out of courtesy and respect," said correspondent Samuel Getachew, speaking to RFI's Africa Calling podcast. The AU headquarters are based in Addis Ababa.

Abiy has refused any further mediation, stating that he gave the Tigray People's Liberation Front (TPLF) ample time to deal with issues.

Getachew says that many young people in the country's capital regard Abiy's offensive into Tigray as necessary to destroy the TPLF, the regional Tigrayan authority and former controlling faction within Ethiopia's federalist system, that they considered repressive.

"They remember TPLF as the party that abused human rights and there was a lack of democracy," said Getachew.

But he also acknowledges that there is a lot pain among people who live in Tigray.

"When you speak to people with connections to Tigray, when you go to their houses and speak to them as individuals, they tell you a different story," he said.

"Their families are stuck in Tigray, the people that are dying are everyday people - the farmers, young students - people barely surviving these difficult circumstances," he added.

Tigray has been cut off for three weeks since Abiy announced the military offensive on the region after he said the TPLF allegedly attacked a federal military base.

The UN has called for unimpeded access to the region to help those caught in the crossfire, including the six million inhabitants of Tigray.

Getachew says that victims of the fighting, no matter what ethnicity they are from, are saying the same thing: "The essence of war crimes is everywhere," he said.

"And not just Amhara victims," he says, referring to the alleged massacre of 600 people in Tigray that occurred earlier this month.

The victims were primarily Amharas, a minority in the region. The state-run Human Rights Commission said earlier this week that it had verified the massacre, but independent verification was impossible to ascertain, due to the three-week communications blackout and restrictions on reporting.

"I respect what they wrote, and I'm sure it happened, but it's happening in every corner of Tigray at the moment," Getachew added.

Communique on the Visit of the African Union Envoys To Ethiopia