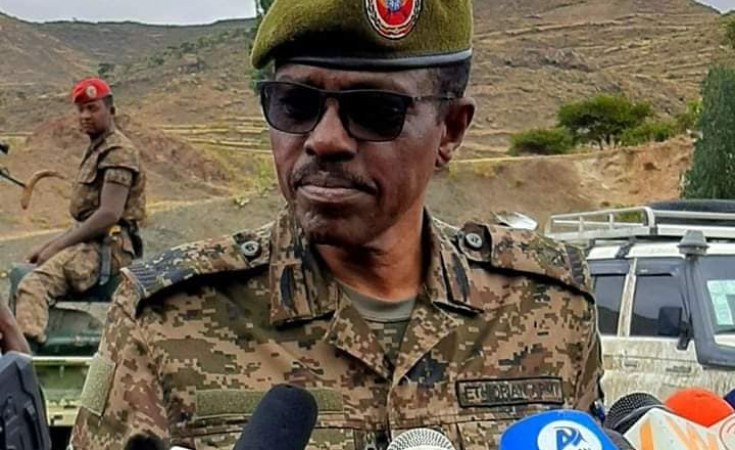 ENA
An Ethiopian commander, General Bacha Debele, addresses the media. He was reported on November 28 to have said that what state media called the Tigray "junta" would be overcome within days.
Radio France Internationale
By Agencies / RFI

The capital of Tigray has been hit by heavy shelling as the Ethiopian government of Abiy Ahmed began its offensive against the dissident leaders of the country's northern region.

The local Tigray government said that Ethiopia's military had started hitting the centre of Tigray's capital Mekelle with heavy weaponry and artillery.

"The Tigray regional state calls upon all who have a clear conscience, including the international community, to condemn the artillery and warplane attacks and massacres being committed," the statement said.

According to the International Crisis Group, the fierce fighting has left thousands dead "including many civilians as well as security forces".

Tens of thousands of refugees have streamed over the border into Sudan.

Abiy announced on Thursday he had ordered a "final" offensive on TPLF leaders. Ethiopia's military said it has encircled the city.

In its statement on Saturday, the Tigray government accused Abiy of teaming up with Isaias Afwerki, president of neighbouring Eritrea, for the assault on Mekele.

"The Tigray regional state would like it to be known to friends and enemies alike that it will give proportional response to the massacres and property damages being done by those fascists," the statement said.

The TPLF dominated Ethiopian politics for nearly three decades before Abiy came to power in 2018, and it fought a brutal border war with Eritrea that killed tens of thousands between 1998 and 2000.

Abiy won the Peace Prize in large part for initiating a rapprochement with Isaias in 2018.

Ethiopia has denied enlisting Eritrean military support in the ongoing operations in Tigray, though it has acknowledged using Eritrean territory.

Residents of the border city of Humera, in western Tigray, told the AFP news agency that shells fired from Eritrea hit both residential and commercial structures during fighting earlier this month.

Global concern has heightened in recent days for the fate of Mekele's residents, with world leaders and human rights groups warning of possible rules of war violations during operations there.

Pope Francis is among those worried about the intensifying fighting, loss of life and displacement, Vatican media head Matteo Bruni said Friday.

Abiy's government has said the military campaign in Tigray was triggered by attacks by pro-TPLF forces on federal army camps in Tigray beginning the night of November 3.

Drums of War Were Beating for Almost Two Years. Why Ethiopia's Conflict Was Avoidable