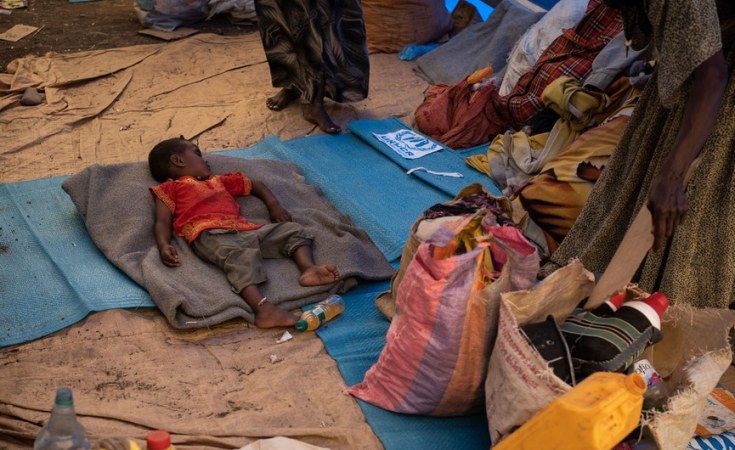 Olivier Jobard/UNHCR
A young Ethiopian refugee sleeps on a mattress at a transit site in Hamdayet, Sudan.
Deutsche Welle (Bonn)

Thousands are believed to have been killed or wounded during clashes between Ethiopian and rebel TPLF forces. The UNHCR has also asked for financial support to help tens of thousands who have fled to neighboring Sudan.

"It is not possible yet, so I hope it will develop in the next few days," UN High Commissioner for Refugees Filippo Grandi told an online press conference from the Sudanese capital, Khartoum.

Ethiopian Prime Minister Abiy Ahmed declared an end to a military operation in Tigray on Saturday after the army took control of the regional capital of Mekele. Abiy's government had been trying to suppress a rebellion from the Tigray People's Liberation Front (TPLF), a powerful ethnically based party that dominated the region from 1991 until Abiy came to power in 2018.

Grandi said Ethiopia's announcement that it had ended its military offensive "does not mean the conflict is finished."

Thousands of people are believed to have been killed in Tigray since an offensive by Ethiopian forces in the region began on November 4.

The International Committee of the Red Cross (ICRC) said Sunday that hospitals in Mekele are running "dangerously low" on supplies to care for the wounded. It said a referral hospital in the city is lacking body bags for the dead and is running low on basic supplies such as gloves.

"The influx of wounded forced the hospital to suspend many other medical services so that limited staff and resources could be devoted to emergency medical care," the ICRC said in a statement.

Grandi said he is also very concerned about the fate of nearly 100,000 Eritrean refugees there amid reports that some have been abducted.

"It is my strong appeal for the prime minister of Ethiopia for this situation to be addressed as a matter of urgency," Grandi said.

Additionally, according to the UNHCR, nearly 44,000 people have fled the region to neighboring Sudan, which lacks the infrastructure to handle the influx of refugees.

"The sheer number of arrivals is really putting all of us under pressure," UNHCR spokesperson Babar Baloch told DW earlier this month. "The effort now is to get basic supplies to these refugees who are fleeing."

The Ethiopian government has thus far rejected external mediation in Tigray, maintaining the conflict in the region is an "internal affair." Abiy's government said earlier this week it is committed to the "protection and security of civilians" in the area.

Meanwhile, six explosions were reported in Asmara, the capital of Eritrea, on Saturday night, according to the US State Department. It was not immediately clear if the explosions were related to the Tigray conflict.

The TPLF has accused Eritrea of sending troops into the region to support the Ethiopian operation there. The group, which regards Eritrea as a mortal enemy, fired rockets into Asmara earlier this month.

MPs Call For Tigray 'Junta' to Be Classified as Terrorists

Ethiopia Govt Questions Talk of Tigray Guerrilla War
Tagged:
Copyright © 2020 Deutsche Welle. All rights reserved. Distributed by AllAfrica Global Media (allAfrica.com). To contact the copyright holder directly for corrections — or for permission to republish or make other authorized use of this material, click here.