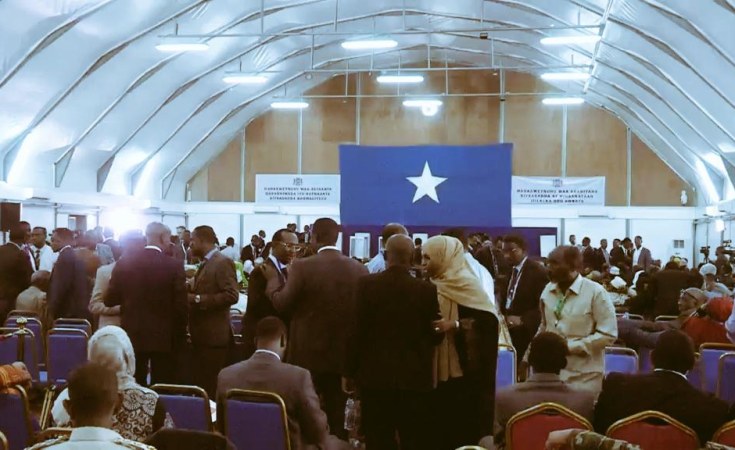 The governor of Benadir who also doubles up as the Mayor of Mogadishu, Omar Mohamud Mohamed (Filish) spoke strongly about the candidates' conference and their activities in recent days in Mogadishu.

The mayor has threatened violence and acts against the opposition presidential candidates during a speech in clan ceremony in Mogadishu.

He also said it was "unacceptable" to threaten Hawiye with a gun, noting that this was not the case, as he argued that individuals, including the prime minister of Somalia, were from the community.

"I am the governor and I'm responsible for the security of the city.Am I not Hawiye?" "They do not happen to create instability, they just send messengers to show that they have worked," Filish said.

"If they try to disturb the stability, Allah has ordered us how to deal with them, and this is what Allah said in Surat al Ahzab: If the hypocrites, and those with sickness in their hearts, and rumour-mongers in Medina [town] do not desist, We will certainly incite you against them, and then they will not be your neighbours there any longer," Mr Filish went on to say "they deserve to be condemned. If they were to persist, they would get themselves captured and killed relentlessly wherever they are found!"

The governor, who appears to be outraged by the activities of the opposition and fellow politicians in Mogadishu, said opposition politicians have been sent from abroad and are carrying out long-term plans.

Filish also said they would take strong action if they tried to destabilize the country, calling for the killing of the opposition, citing Quranic verses in Surat al-Ahzab.

The opposition presidential candidates have been gathering in the capital since Saturday.

The 14 contenders concluded a six days conference today and issued an 18 point communiqué.

Thee leaders demanded the government of President Mohamed Abdullahi Farmajo disperse the committee alleging packed with government officials and supporters of the incumbent president which is contrary to existing electoral laws.

The communiqué farther stated the spy agency chief Fahad Yasin to be removed from his post and demanded the withdrawal of FGS troops Gedo region.

The candidates which include two former heads of the state namely Hassan Sheikh Mohamud, Sheikh Sharif Ahmed, and former prime minister Hassan Ali Khaire further insisted on press freedom and a 30% quota for women during the electioneering period but also pressured President Farmajo government that if their demands will not be met they will form own poll management committee to "save the country from a power vacuum."

Somali Leaders At Odds Over Holding Elections
Tagged:
Copyright © 2020 Dalsan Radio. All rights reserved. Distributed by AllAfrica Global Media (allAfrica.com). To contact the copyright holder directly for corrections — or for permission to republish or make other authorized use of this material, click here.