South Sudan: UN Arms Embargo Must Be Maintained After Surge in Violence Against Civilians in 2020 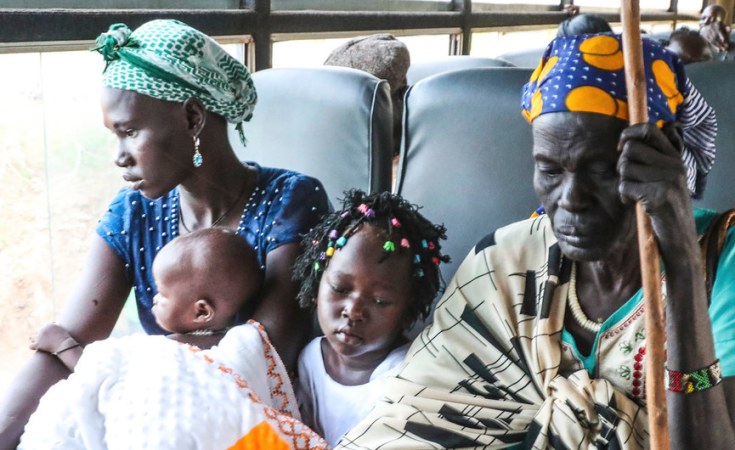 The United Nations Security Council (UNSC) must maintain the arms embargo on South Sudan, Amnesty International said today, after confirming shocking cases of extreme violence by government forces and an increase in attacks on civilians, including war crimes, across the country in 2020.

New research by Amnesty International has documented a series of extrajudicial executions, forced displacement, torture, and destruction of civilian property by government and former opposition forces between April and June 2020 in Central Equatoria State, southwest of the capital Juba.

The UNSC is set to conduct a mid-term review of its arms embargo and other measures on South Sudan before 15 December.

"Earlier this year, as South Sudan's officials called for the arms embargo to be lifted, government soldiers were shooting civilians, burning homes, raping women and girls, and displacing tens of thousands of people from their villages in the south of the country," said Deprose Muchena, Amnesty International's East and Southern Africa Director.

"The atrocities of this conflict compound the decades of suffering of the millions of South Sudanese, who survived war crimes and crimes against humanity during the struggle for independence from Sudan.

"Quite simply, the government of South Sudan has failed to protect its people. It would be irresponsible of the Security Council to suspend or lift the arms embargo now, in light of the horrendous human rights violations being committed by government forces."

Clashes have continued in the southern part of the country between the rebel group known as the National Salvation Front (NAS), on the one hand, and the government's South Sudan People's Defence Forces (SSPDF) and Sudan's People's Liberation Army-In Opposition (SPLA-IO), on the other.

In Central Equatoria State alone, Amnesty International documented 110 destroyed structures in several attacks between April and June 2020, a fraction of the total reported in local media. According to data from the Armed Conflict Location and Event Data Project (ACLED), the states of Jonglei, Lakes, Warrap and Western Equatoria also saw significant widespread violence during that period. The statistics revealed a 400% increase in violence compared to the same period in 2019, according to analysis by the Stimson Center.

Amnesty International conducted 26 remote interviews with eyewitnesses and family members of victims, five of whom were women, from Lainya, Morobo and Yei counties in Central Equatoria State. All those interviewed requested anonymity due to the ongoing threat of retaliation by government forces. Researchers also used satellite imagery, photos from the scene of violations, and open source data to verify the attacks.

The organization interviewed six displaced people who witnessed fighting on 9 and 10 May near the Pojulu villages of Lomilikin, Loka West and Kengwe in Lainya County. Following clashes with the NAS, a mixed force of SSPDF and SPLA-IO soldiers searched all the villages in the area.

On the morning of 10 May, government soldiers detained four men - named by locals as Lobor, Lomiong, Sabata, and Lomoro - in Kengwe and accused them of supplying NAS fighters with food. The men's hands were tied behind their backs and they were led to the centre of the village, where approximately 20 women and children had also been gathered. When one youth tried to run away, a soldier opened fire with a PKM machine gun and killed the four captives.

One witness told Amnesty International: "He shot them all dead. One of the four was shot so completely you could not recognize him. He was Lomiong. He was hit so rapidly on the face and head. After they killed the four, they started shooting animals, like goats and chickens. Then they set the whole area on fire."

Satellite analysis confirmed that villages north of the Yei-Lainya road were razed between January and June 2020. Amnesty International also reviewed verified photos of the four men, taken immediately after they were killed, and confirmed the details of their specific injuries with multiple interviewees. ACLED reported that around 9 May, 11 villages in the area were burned, and an estimated total of 22,000 people were displaced.

The yellow squares highlight areas where structures were razed - likely by burning - approximately four km northwest of Lainya in South Sudan. Imagery confirms the event happened between January 19 and June 14 2020. Over 90 structures were found to have been razed between those dates in the area analysed over Lainya. © 2020, DigitalGlobe, Inc., a Maxar Company

Amnesty International interviewed eight survivors and witnesses of attacks on civilians and villages in Mukaya Payam in Lainya County throughout April. They described how government soldiers attacked residents with knives, poured boiling water over one woman, and looted homes and livestock. Soldiers accused civilians of feeding NAS fighters and working as their informers.

Amnesty International interviewed five people who survived an attack in Panyume Payam in Morobo County in early June. On 3 June, following clashes with NAS fighters, SPLA-IO soldiers detained and tortured to death a man named John Capo in the nearby village of Soper. Capo was a chief and leader in the area. SPLA-IO soldiers accused him of also being a NAS commander or supporter, as he had not informed them of the impending attack.

One man, who witnessed the attack while fetching water near the military base, told Amnesty International: "Soldiers arrested Capo. They tied him up, and tortured him to late evening. The man was collapsing because they cut parts of the body, and fed him with that. In the after-hours, they took him out, and he died in the bush."

Three other witnesses confirmed the horrific details of the mutilation - including cutting off Capo's ear and genitals - and that senior SPLA-IO commanders were present as he was tortured. They apparently left him to bleed to death in the bush, and villagers discovered his body several days later.

"Our research reveals that SSPDF and SPLA-IO soldiers are routinely violating international humanitarian law and failing to protect civilians. While these horrific attacks continue, it is vital that the UNSC demands South Sudan ends these war crimes and brings the perpetrators to justice, while maintaining the arms embargo on the country," said Deprose Muchena.

In April 2020, Amnesty International published evidence from South Sudan of newly-imported small arms and ammunition, illicit concealment of weapons, and diversion of armoured vehicles for military uses that were not approved under the arms transfer licenses.

Several bodyguards for prominent generals from government and opposition forces alike, who would have first access to newly acquired weapons, carried models of Eastern European weapons never before documented in South Sudan. Amnesty International believes these weapons were brought into South Sudan in violation of the arms embargo.

On 29 May, the UNSC renewed the arms embargo for another year by a 12-0 vote. Only Russia, China and South Africa abstained. By 15 December, the UNSC is to conduct a mid-term review of the arms embargo against progress achieved in implementation of all the provisions in the 2018 revitalized peace agreement, and adherence to a ceasefire. The UNSC will also consider how to develop benchmarks against which to review the arms embargo in May 2021.

Amnesty International is calling on the UNSC to prioritize consideration of the state's atrocious human rights record, not simply the fragmented implementation of the provisions of the 2018 revitalized peace agreement.

South Sudan Okays Completion of Unity Government
Tagged:
Copyright © 2020 Amnesty International. All rights reserved. Distributed by AllAfrica Global Media (allAfrica.com). To contact the copyright holder directly for corrections — or for permission to republish or make other authorized use of this material, click here.