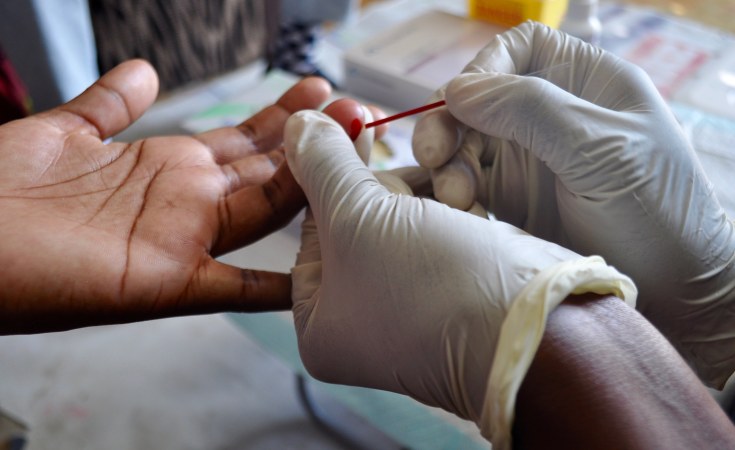 Kim Cloete
A participant in research into HIV infections is tested for the virus.
Vanguard (Lagos)

Dr Erasmus Morah, the Country Representative, Joint UN Programme on HIV and AIDS (UNAIDS), says no fewer than 1.6 million Nigerians died of HIV/AIDS since the outbreak of the epidemic in 1985.

He made the disclosure during a Candlelight Memorial for people who died from the condition in Nigeria, organised by Network of People Living With HIV/AIDS in Nigeria (NEPWHAN) on Monday in Abuja.

The News Agency of Nigeria (NAN) reports that the candlelight memorial is part of activities to mark the 2020 World AIDS Day on Dec. 1, annually celebrated since 1988.

The World AIDS Day is an international observance day dedicated to raising awareness of the AIDS pandemic, caused by the spread of HIV infection and mourning those who died of the condition. The theme for the 2020 observance is "Ending the HIV/AIDS Epidemic: Resilience and Impact" to focus more attention to the HIV scourge, increase awareness and knowledge, as well as speak out against stigma.

The UNAIDS representative, therefore, expressed UN's determination to protect people living with the virus by providing financial assistance, drugs and foods for communities, noting that "UNAIDS is the main advocate for accelerated, comprehensive and coordinated global action on the HIV/AIDS pandemic."

He called for increased collaboration among stakeholders to check the spread of the scourge and described persons living with HIV as indispensable community in the HIV response.

Morah also reiterated the commitment of UNAIDS in championing global solidarity against stigma and discrimination against people living with HIV/AIDS.

Dr Aliyu Gambo, the Director General, National Agency for the Control of AIDS (NACA), emphasised the imperatives of testing in the fight against the spread of HIV/AIDS. Aliyu said that test was very important in intensifying the fight against HIV.

He added that "the gateway to HIV reduction is testing. After testing, you either take the two packages of Prevention and Care or treatment, thereby reducing the viral load."

The NACA boss said that testing was necessary in achieving the 95-95-95 target of the UNAIDS by identifying 95 per cent of infected persons and placing them on treatment.

Mr Abdulkadir Ibrahim, the National Coordinator of Network of People Living With HIV/AIDS in Nigeria (NEPWHAN), called for unity against discrimination and marginalisation of the vulnerable community.

Ibrahim, who harped on the global theme of the 2020 World AIDS Day; "Global Solidarity and Shared Responsibility", emphasised the need to carry all along and let no one be left behind.

He also stressed the need to build people-oriented resilient health system which was gender sensitive and rights-based for an end to HIV.

Ibrahim, who said that the lack of investment in health had exposed a lot of countries to HIV infection, called for epidemic preparedness capacity "to beat the next health security challenge.

"It is within this context that NEPWHAN commenced the implementation of the community-led monitoring initiative in Nigeria by collecting quantitative and qualitative data among people living with HIV.

"While we look forward to continued collaboration, working and partnering with everyone for the interest of people living with the virus and ending HIV by 2030, I want to appeal for support to government in the fight against HIV."

Mrs Christy Laniyan, the Project Director, Global Fund Impact Project, Family Health International (FHI360), said that the candlelight commemoration was an opportunity to show solidarity to people who were directly or indirectly affected, especially in the face of the global COVID-19 pandemic.

She expressed the commitment of FHI360 in achieving HIV viral load reduction through provision of drugs and care.

Laniyan said FDI360 had been working toward reducing mother-to-child transmission of the virus through collaboration with NEPWHAN.

Mr Ikenna Nwakanma, the First Co-Chairman of the Coalition of Civil Society Network for HIV/AIDS in Nigeria (CoCSNAN) saluted the courage of people living with the virus and those who died of the condition.

He called for stronger collaboration against stigma and discrimination against people living with HIV to reduce the spread. (NAN)

40 Years On - Four Action Points to End AIDS As a Health Threat
Tagged:
Copyright © 2020 Vanguard. All rights reserved. Distributed by AllAfrica Global Media (allAfrica.com). To contact the copyright holder directly for corrections — or for permission to republish or make other authorized use of this material, click here.