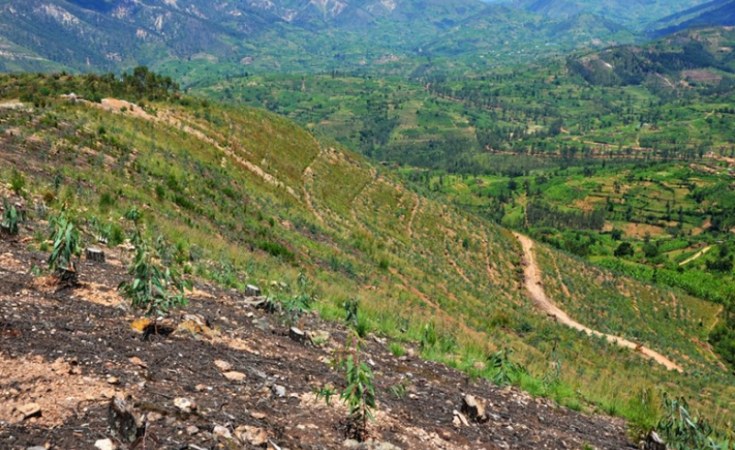 We need to understand the consequences of technology, migration, climate shifts, infrastructure and a growing middle class on forest-dependent people

The fifth anniversary of the signing of the Paris Agreement offers a moment to reflect on progress towards global climate goals. When it comes to protecting the world's forests, which are essential to global and national efforts to combat climate change and biodiversity loss, there has been little - if any - progress.

When we think of deforestation, greenhouse gas emissions and wildlife extinctions immediately come to mind, but standing forests provide food, water, medicines and incomes for millions of people across the world. Yet, despite this critical forest-poverty link, there has been limited discussion at the highest levels about the need to protect trees for the sake of ending poverty.

One reason why we've been missing this link is that researchers often look at the role that forests play in uplifting local communities through too narrow a lens. But to truly understand the kinds of actions and policies that are needed to safeguard forests and the communities that depend on them, we need to better understand the forces shaping forests and livelihoods at regional, inter-continental and global scales.

A new study released this week that we co-authored, alongside 22 other experts in the field, identifies five mega-trends affecting forests and forest communities. We believe that these trends are poorly understood and are likely to have major consequences for forests and forest livelihoods over the coming decade.

Droughts and excessive rains are increasing forests' susceptibility to diseases and human-induced wildfires and floods. These are affecting forest health and die-offs at unprecedented scales, and there is increasing evidence that the degradation of forests can result in the emergence of zoonotic diseases with the ability to spread globally. The COVID-19 pandemic has, alongside other diseases of animal origin like Ebola, SARS and HIV, demonstrated the devastating human and economic impact of pandemics.

Increased rural to urban migration - primarily of working-aged men - is causing a mass exodus among forest-reliant communities. The forces driving this migration trend are complex but include the ebb and flow of national and international labour markets. What these demographic changes means for forest ecosystems and how they are managed is poorly understood. On the one hand, the rural exodus can lead to reforestation as people cease to use land for agriculture. On the other, greater demand for beef and soy in growing cities could also lead to increases in deforestation.

3. The rise of the middle-class in low-and middle-income countries

By 2030 the middle class in low-and middle- income countries will grow to an estimated 4.9 billion people, amounting to around 50% of the global population. The growth in demand driven by the new middle classes will increase pressure on land and other resources for the production of cattle, soy and palm oil. Already, between 2001-2015, 27% of forest disturbance was attributed to commodity-driven deforestation. Further growth in demand and a continuing culture of consumerism will alter local and global consumption patterns, with potentially severe effects on deforestation rates, wildlife populations and rural communities.

Large-scale infrastructure initiatives, such as China's Belt and Road projects, are likely to have transformational impacts on forests and rural communities. To accommodate demand for energy, natural resources and transport, many countries have planned ambitious infrastructure growth. By 2050, there is expected to be at least 25 million km of new roads globally to help facilitate commodity flow between transport hubs. Governments in the Amazon basin alone are developing 246 new hydroelectric dams, and illegal mining activities are expanding rapidly. These can lead to forest loss, displace forest-residing peoples, disrupt livelihoods and provoke social conflicts as communities lose access to land and resources.

These five trends highlight novel actors and key mechanisms through which they are likely to affect forests and forest livelihoods. Gaining a better understanding of the extent they will impact forests and livelihoods is critical for policy and advocacy at local, national and international scales and to ensure the correct interventions are recognised for successful sustainability transitions.

These trends are creating new agricultural and urban frontiers, changing existing rural landscapes and practices, opening spaces for novel conservation priorities and facilitating an unprecedented development of monitoring and evaluation platforms that can be used by local communities, civil society organisations, governments and international donors.

Understanding these larger-scale dynamics and their impacts is essential for the design and implementation of national and international strategies that can support not only the critical role of forests in meeting livelihood aspirations locally, but also a range of other sustainability challenges more globally.

Johan Oldekop is a Senior Lecturer in Environment and Development at the University of Manchester's Global Development Institute.

Laura Vang Rasmussen is Assistant Professor in the Department of Geosciences & Natural Resource Management at the University of Copenhagen.

* Any views expressed in this opinion piece are those of the author and not of Thomson Reuters Foundation.